Is this a good Cinebench R20 score?

Is this a good Cinebench R20 score? 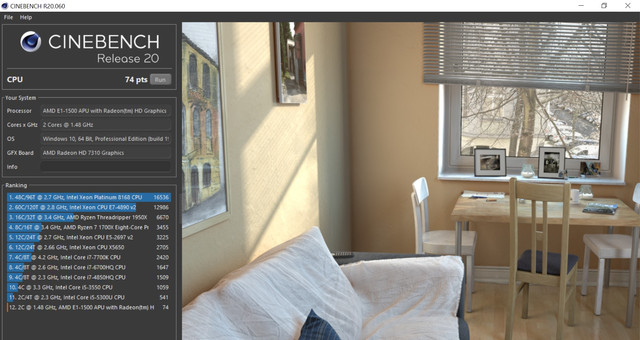 If anybody is wondering no this isn't some random image I found on google. I actually ran this yesterday just for shits and giggles. Too bad it isn't overclockable. If it was I might be able to get that score up into the triple digits!

This computer doesn't even seem THAT old. It was my aunts old computer which she bought around 2013 or so I think. My "retro" Windows XP machine I have set up has a Sempron 3000+ in it and that processor is from 2005. 8 years older than this E1-1500 APU but it is actually quite a bit faster! It seems the E1-1500 was mostly used in laptops but this one is in a desktop. It is a Gateway SX2110G-UW23 for anyone who is interested. This thing would have been terrible even back in 2013. Heck it would have probably been pretty weak even in 2005!

I also have a random Dell Inspiron 1545 laptop that I got for free. It has a Celeron 900@ 2.2ghz. Apparently even it is more powerful than the E1-1500 APU! I'll run Cinebench on it too and see if I can get triple digits!

Can it run Crysis?
Top

Crysis came out all the way back in 2007! This high powered machine can run games 10 years newer than that. Thats right I just tried a game that was released for PC in 2017 and it ran at 100 percent speed! The load times were slow but the gameplay was perfect. I am of course talking about the graphically intense Sonic Mania. Check it! This gives me the chance to mention another really nice feature that CRTs had that LCDs don't have as far as I know. And that is the ability to resize and move the picture directly through the monitor. Back then if your desktop or a certain program wasn't displaying properly you could manualy adjust the size to make it fit. Take Sonic Mania for example. Like many games made in the past 5+ years it doesn't support 4:3 only 16:9 which is why the screenshot above has black bars above and below the image. If you want it to fill a 4:3 all you have to do is increase the vertical size and voila! You are playing with a full screen image, just make sure you change the settings back before you exit the game. 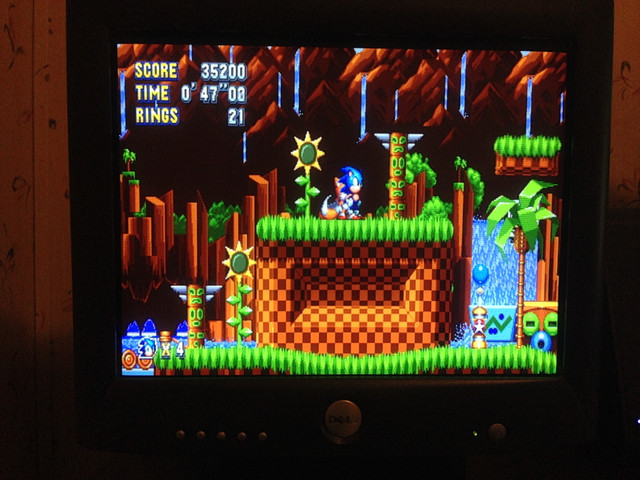 In my opinion this looks much better stretched to 4:3 vs playing on a bordered 16:9 image. Now I know some people are super against stretching an image to fill the screen, but they are usually talking about stretching 4:3 to 16:9 (which I sometimes do) To me the image really doesn't look stretched out too far to me. It looks much better being able to use the whole screen. Does anybody think the image looks stretched? In all seriousness it really doesn't look stretched out to me. It isn't like I'll be playing it all the time anyway, I'm just screwing around with some older PCs again for the fun of it.

Both the E1-1500 desktop and Celeron 900 laptop are still pretty usable for light stuff like web browsing and video streaming.

It's a 2D powerhouse.
Top

I was just going to use the E1-1500 as an extra computer. Use it to have a video playing while I doing something mundane like grinding in a game or whatever but it is just too damn slow! It worked much better with Windows 7 vs Windows 10 but either way it is pretty slow. So I've switched to using the Dell Inspiron laptop for that purpose. It is just a single core Celeron 900 @ 2.2ghz but it runs much better than the E1-1500. Windows 10 was atleast usable on it but still a bit slow. I know next to nothing about Linux but I installed Lubuntu on it as I've read that is a good version of Linux for older systems. It runs great! As I said I'm no expert when it comes to Linux but it comes with Firefox pre-installed so for internet usage it is ready to go from the start. I had to add additional drivers to get the wifi to work but that was as simple as clicking "use additional drivers"