Big Boss Man wrote: ↑Thu Nov 24, 2022 10:50 pm It does look cool, maybe cover the label next time so it looks like a special edition coloured vinyl.

Funny you should say that because that is how I wanted to do it! My girlfriend wanted to leave the label showing because she thought it would look better. I'll tell her Big Boss Man disagrees.

but both ways look cool, so you're both right
Top

I found something awesome at Goodwill a couple of days ago. Something that in my 10 years of going to Goodwill and other thrift stores and flea markets I have never seen. 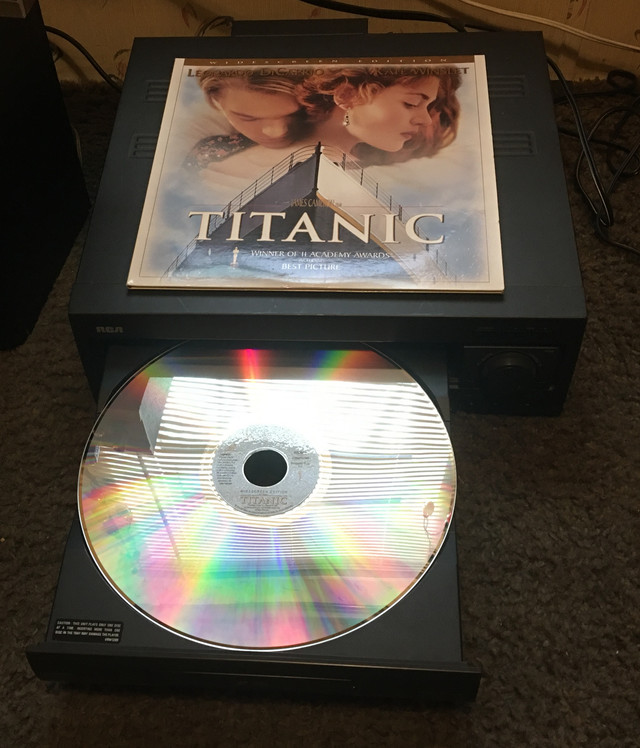 Somehow in all my years of thrifting I have never come upon a Laserdisc players. I've found a few Laserdiscs over the years mixed in with the records but never a player. Which is kind of surprising because they aren't super common but they also aren't extremely rare either. I saw it sitting on the shelf and at first I assumed it was just another CD changer. But as soon as I got a close look at it I saw the Laserdisc logo and was like OMG I finally found one! The price wasn't too bad it was $15 with 10 percent off so $13.50.

After putting the player in my cart I went straight to the record section because I figured if someone donated the player maybe they also donated a bunch of movies for it. I looked through all the records and only found 1 Laserdisc and that was Titanic. I'm not a fan of the movie but it was $1.35 so I couldn't pass it up. I went back over and plugged the player in and popped in Titanic to make sure it would play discs and it seemed to spin up and play. When I got it home and hooked it up to a TV sure enough it was playing just fine.

I've only encountered one issue with it. It is a model that plays both sides of a disc but that function isn't working. I took the cover off to take a look and the laser is flipping over and moving to the top of the disc with no problem but after that it spins up and never plays. It would be nice if that feature was working but it isn't that big of a deal that it doesn't work.

Nice!
If I should Die Hard Arcade before I Alan Wake.
PREY the Lords of Lore my Soul Calibur to Take-Two Interactive.
Top

Wow, that's pretty cool and at a great price.

I found a box of laser discs at a recycle shop once and bought a few, but the chances of finding a player are fairly remote.
Top

Laserdisc was huge in Japan, so you could probably import a player.


Ah yes the Laseractive one of the most expensive and confusing game consoles ever made. Not only did it have a Sega Genesis\CD and a Turbografx-16/TG-16 CD games but it had specific laserdisc games for each adapter. The ones for Sega were called Mega LD and the TG-16 ones were called LD-ROM². The Laseractive itself cost $970 and the Sega and TG-16 modules were $600 apiece! The Laserdisc games were apparently $120 apiece! I can't imagine what they were thinking with this device. If you bought the Laseractive with both game modules and bought two games for each module it would have cost $2,650! With inflation that is a whopping $5,479! Who in the hell did they think was going to drop that kind of money for this thing? The only sales numbers I can find says they sold and estimated 10,000 units. 10K units worldwide is obviously terrible but I'm surprised they even sold that many!

I got sidetracked and started giving the history of the Laseractive!

Back to Goodwill finds!

This next item is pretty unique. It is a SHINP TCL-1628RGY Laser Projector. Price $5 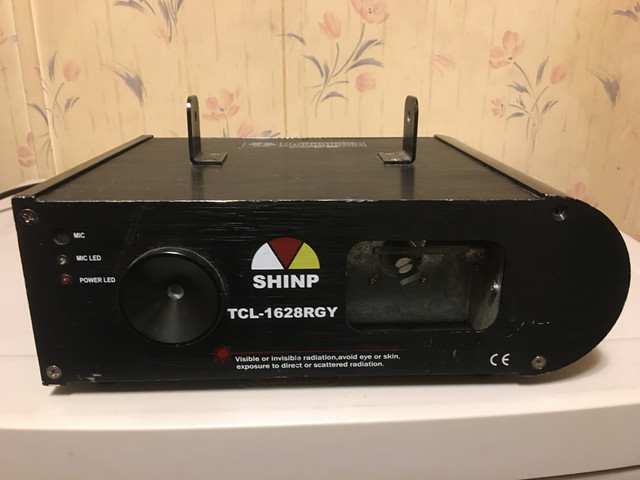 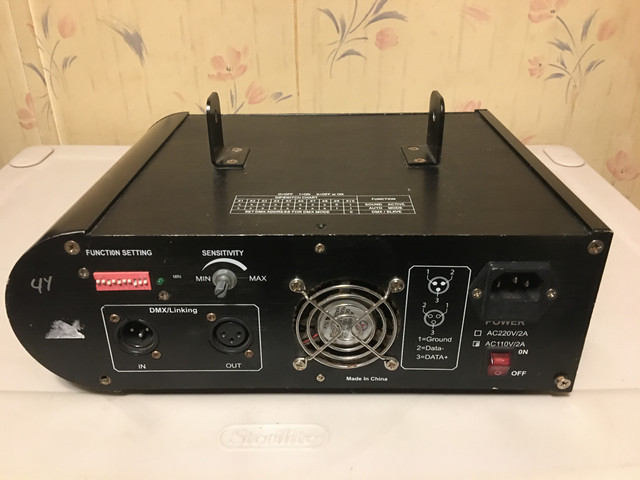 Here is a video I took that shows it turned on


I didn't understand exactly how it worked when I made that video. Heck when I bought it I didn't even know what it was! It has a microphone on the front and when music is playing the lasers move somewhat with the song! It will go much much bigger than I had it in the video. I tried it outside at night and had it pointed at the front of my barn. 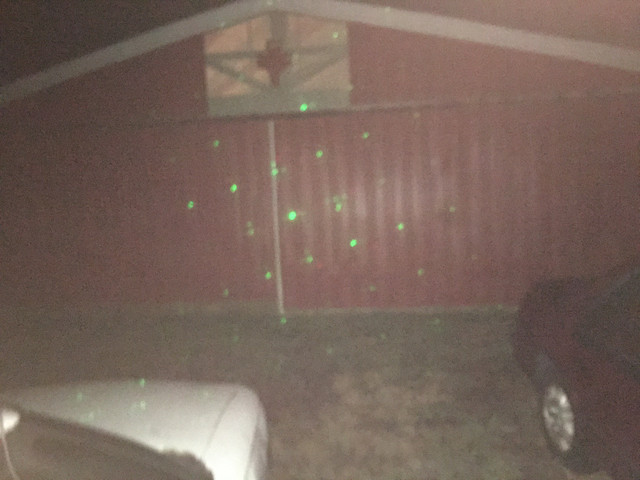 I know that is a terrible picture but it covered the whole front of the barn with ease. It seems like you could cover quite a large surface. It seems to be VERY similar to the Star Shower Laser Light which I also have a few of. 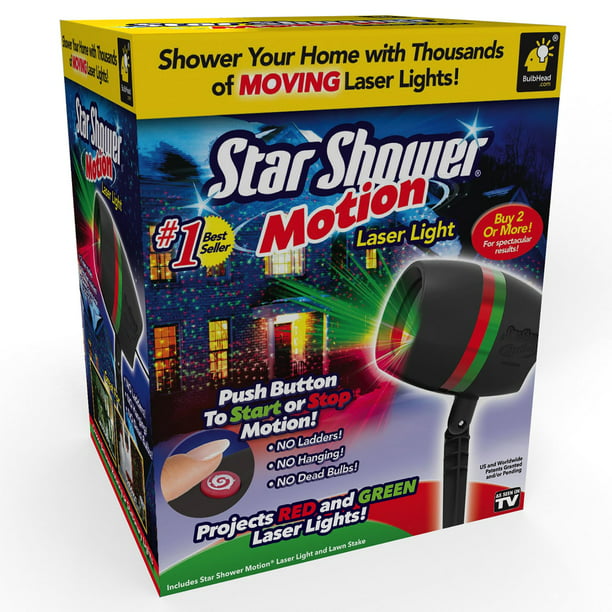 These also can cover a huge surface and the lasers look almost the same. The only difference of course is the Star Motion doesn't have a microphone or hookups for music.

I'm not sure what year the projector is from. The Star Motion Laser came out around 3 years ago I think and I would guess that this Laser Projector is older than that. Pretty neat device for $5.

A few days ago I went to a thrift store I don't usually go to. They didn't have much, next to no electronics at all. I did manage to find one good item though. They appear to be in brand new condition. They also came with an extra set of the foam pads that go around your ears. 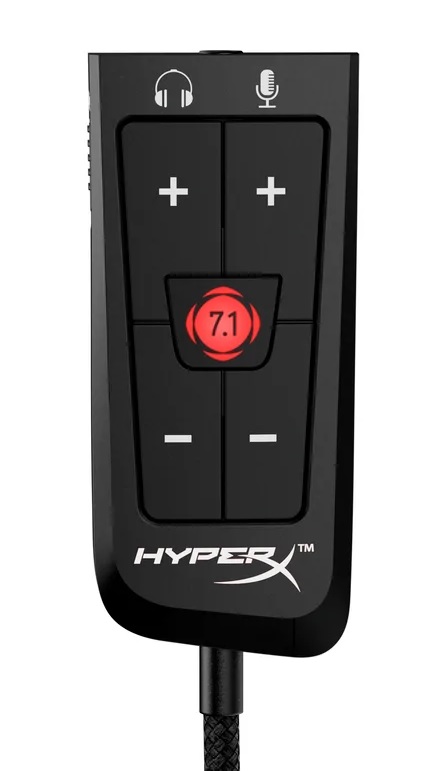 At first I just thought this was an inline controller for the headset but it plugs into USB and then the headphones plug into it. I didn't realize it was a separate USB sound card. It also came with a USB extension cable for it.

It all looks to be in brand new condition. If it was used it was either used very lightly or not for very long. I've tested it all out and they sound great. They have really good bass and are the best headphones I have for blocking outside noise.

Pretty good deal, but the technology is about 30 years too new to be a REALLY good find.
If I should Die Hard Arcade before I Alan Wake.
PREY the Lords of Lore my Soul Calibur to Take-Two Interactive.
Top

I know right, it is too bad they didn't have a pair of these laying around! 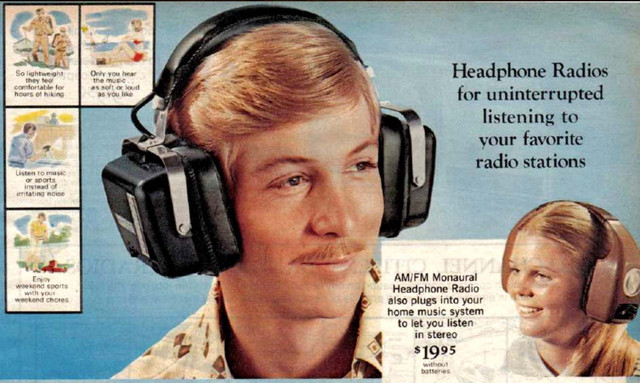 Even though I'm somewhat stuck in the past and enjoy buying loads of old electronics that doesn't mean I only use old stuff.

For example you might be surprised to learn that I'm not actually typing this message on a 486 or a Pentium PC that is connected to the internet with a 14.4kbps modem. And when it comes to gaming I don't use a Matrox Millennium or an ATI Rage 128! I know....I'm a fraud!

I type everything on a typewriter and send it to my internet consultant who posts it for me!
If I should Die Hard Arcade before I Alan Wake.
PREY the Lords of Lore my Soul Calibur to Take-Two Interactive.
Top

I had thoughts of selling the HyperX Headphones since they are fairly recent and go for a decent amount. However after using them for awhile I think I should just keep them. I don't use headphones a ton but when I do why not have a nice pair since I got them for such a low price. I went and compared all the headphones I currently have just for shits and giggles.

In order we have the "HyperX CloudX Gaming Headset for Xbox" "Logitech G430" " Focusrite Scarlett HP60 MKII" then in the bottom row is a no name brand corded headphones followed by a no name bluetooth set. 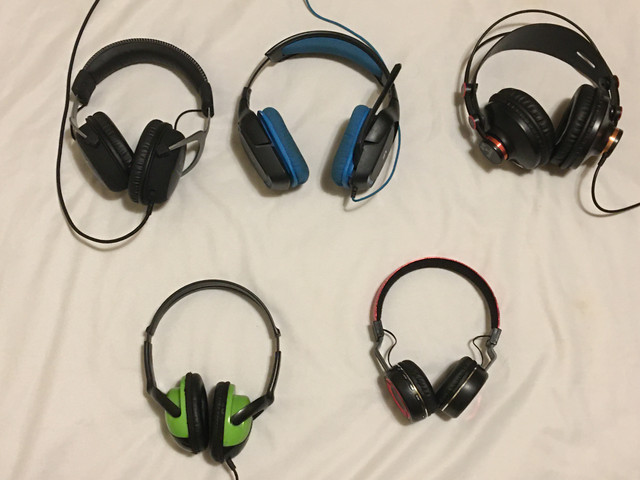 I'm no audiophile, nowhere even close! As long as something doesn't sound like absolute garbage it is usually good enough for me. With that being said I tried each set of headphones to see how they compared. They way they appear in the photo is also best to worst.

The Focusrite Scarlett HP60 MKII were the most disappointing for me. These apparently aren't that cheap and they look to be good quality but I was not impressed with the sound quality at all. First of all when the 3.5mm plug on them is plugged all the way in they sound like total garbage as if they are blown or something. I had to pull the plug out by one "click" and then they functioned properly. Could be a problem on my end but this was the only set that had that problem. But even when working properly they were a huge step down from the previous two imo. Also the fit was nothing amazing. Not horrible but not great either. Pretty mediocre.

No name green headphones- No surprise these were the worst sounding ones so far. They sound like what you'd expect a cheap pair of no name headphones to sound like. What is funny about them though is that when I bought them around 10 years ago or so I thought they were quite good! I used them for listening to music at work and thought they sounded just fine. I guess I didn't have anything better to compare them to lol. Also kind of funny is that I probably paid the same price for them as I did the HyperX ones.

Finally the no name bluetooth set. I got these for free as someone asked if I wanted them and I thought it would be nice to have a wireless pair of headphones. They sound even worse then the green set and the fit on the ears terribly.

I realize this whole post is kind of pointless but I wanted to compare the different headphones I have and figured I might as well just post about it while I'm at it.

My problem with Logitech is all their headsets are either REALLY SHIT or at the opposite end REALLY HEAVY/UNCOMFORTABLE.

I don't often use headphones either and the closest I come to being an audiophile is wanting a full range equaliser when I'm listening to music because 90% of speakers and headphones have too much bass. Which is even worse than being too tinny in my mind, especially when they can't handle the bass at all.

But on the few occasions I use headphones, I want to be able to wear them comfortably for 19 hours at a time. The G430 just can't be done so I'm curious to know how comfy/heavy the hyperx is?

I'm using a pair of cheap corsair at the moment because they were the best feeling ones I can wear for a day even if they don't sound as good as basically any other headset I've ever tried.
If I should Die Hard Arcade before I Alan Wake.
PREY the Lords of Lore my Soul Calibur to Take-Two Interactive.
Top
Post Reply
295 posts