Snapchat making a docu series on him too

Can someone explain why George W. Bush is supposedly better than Donald Trump? I do not understand people liking GWB. Or is Trump going to be okay after he leaves office too? Did we forget Iraq, crashing the economy, Katrina, fighting gay marriage, "faith based" funding, being far more anti-science than Trump, sweetheart deals for oil companies, etc. Trump is bad but (as of today, anyway) Bush was worse. Yet he's okay with a lot of people who hate Trump.
Top

Bandit wrote: ↑
Wed Oct 09, 2019 12:07 am
Can someone explain why George W. Bush is supposedly better than Donald Trump? I do not understand people liking GWB. Or is Trump going to be okay after he leaves office too? Did we forget Iraq, crashing the economy, Katrina, fighting gay marriage, "faith based" funding, being far more anti-science than Trump, sweetheart deals for oil companies, etc. Trump is bad but (as of today, anyway) Bush was worse. Yet he's okay with a lot of people who hate Trump.

I've known some pretty liberal people who think of GWB as a nice, "aww shucks" Texas cowboy rather than the neocon enabler he was. Maybe it's a form of cold conform for some to find some nostalgia in his presidency.

Most people remember George H.W. Bush as a nice moderate Republican. For as congenial as he was, Bush Sr. was also a huge sycophant that enabled the racist fringes of Republicans back in the 1960s, despite his own personal convictions. PBS did a really great documentary with its Presidents series showing how Bush Sr. compromised his integrity for party support back when was running for office in Texas. The same tendencies continued when he partnered with Reagan despite his "voodoo economics" remark during the 1980 election.

GWB fell into the same trap with goons like Rumsfeld and Cheney. Moral conservatives will just point to Bill Clinton signature on the Defense of Marriage Act to deflect attention from Bush. Liberal apologists will gladly take GWB's legacy at face value with his goofy, affable personality. I can't say whether GWB believed the BS he was shoveling, but they were rough years regardless.
Top

Yeah, the only thing I can think of is that these are people who base their politics on personality rather than policies. So Trump being confrontational and W. doing his Reagan "I'm just an everyday Joe" act is the only thing they're looking at. It can't be nostalgia because 2002-08 were awful. Not that 2019 is great by any means, but the Bush years of "let's drain the economy and kill people" were so self destructive for no reason.
Top

Ann Curry joining in to get her revenge.
Top

Because nothing he says is surprising if you've paid attention to him over the years. Really, the guy whose whole thing has been about nostalgia for pre-1970s England is a big Brexit supporter who isn't crazy about immigration? Shocking.
Top

T.I. Escorts His Daughter To The Gynecologist Every Year To Check If Her Hymen Is Intact

The rapper proudly stated that he brings his daughter, Deyjah Harris, to the doctor every year to ensure she's still a virgin.

Rapper T.I. proudly admitted on a podcast this week that he takes his daughter to the gynecologist every year to ensure she’s still a virgin.

The father of six told “Ladies Like Us” podcast hosts Nazanin Mandi and Nadia Moham that he takes his 18-year-old daughter Deyjah Harris to the gynecologist after her birthday every year to check that her hymen is still intact. T.I. told Mandi and Moham that he does this to protect his daughter.

“I think that most kids, man, in hindsight, looking back, they always thank their parents for not allowing them to damage themselves as much as they could have,” he said.

T.I., whose real name is Clifford Joseph Harris Jr., shares Harris with his wife, Tameka “Tiny” Cottle, who stars alongside T.I. in their reality TV show “T.I. & Tiny: The Family Hustle.” The couple have three children together, in addition to four other children from past relationships.

When Mandi and Moham asked if T.I. has had the sex talk with any of his daughters, he said he’s done way more than just talk.

“This is the thing. Deyjah’s 18, just graduated high school now and she’s attending her first year of college, figuring it out for herself,” the rapper said. “And yes, not only have we had the [sex] conversation, we have yearly trips to the gynecologist to check her hymen.”

Mandi and Moham both began laughing, with one jokingly crying out: “Somebody check on Deyjah, she’s a prisoner!” 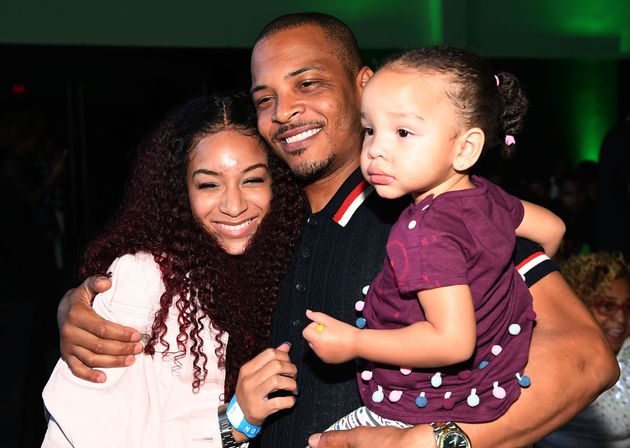 The hymen has long been used as a symbol of virginity, but many medical professionals have disproven the idea that an intact hymen means a woman is a virgin. The hymen is a thin membrane of tissues ― similar to tissue paper ― rather than one intact piece of tissue. Hymens come in all shapes and sizes, and some girls aren’t even born with hymens. The membrane can tear for a variety of reasons including sexual activity, physical activity, menstruation, general bathing and, often, it simply deteriorates as a girl gets older. Additionally, pointing to an intact hymen furthers the heteronormative assumption that the only definition of sex is penetrative sex between a penis and vagina.

T.I. went on to explain how he makes an appointment with the gynecologist for his daughter each year and accompanies her to the doctor’s office. Since Harris is 18, the doctor has to have her sign a consent form to share medical information with her father:

This is what we do. Right after the birthday we celebrate. Usually like the day after the party she’s enjoying her gifts. I put a sticky note on the door: “Gyno. Tomorrow. 9:30.” So we’ll go and sit down and the doctor will come and talk and, you know, the doctor’s maintaining a high level of professionalism. He’s like, “You know sir, I have to, in order for me to share information” ― I’m like, “Deyjah they want you to sign this… so we can share information. Is there anything you would not want me to know? See, doc? Ain’t no problem.” And so then [the doctor] come and say, “Well I just want you to know that there are other ways besides sex that the hymen can be broken like bike-riding, athletics, horseback riding and just other forms of athletic physical activity.” So I say, “Look doc, she don’t ride no horses, she don’t ride no bike, she don’t play no sports. Man, just check the hymen please and give me back my results expeditiously.”

The rapper proudly added that as of his daughter’s 18th birthday, “Her hymen is still intact.”

He's having a great week.
Top

It's some weird old saying.