I want so many series that by the time one ends the next one is ready to go, and 2021 LITERALLY has a new episode of INSERT SHOW of star wars EVERY SINGLE DAY!
I'm not looking forward to the animation ones TOO much, but they'll be perfect filler between the live action real stuff.

Then on New years eve I want Adult Swim to hit us with a surprise Robot Chicken Star Wars Episode 4.
If I should Die Hard Arcade before I Alan Wake.
PREY the Lords of Lore my Soul Calibur to Take-Two Interactive.
Top

Right? I'll try to remain calm until we see the final product, but the Mandalorian has gotten really good in season 2 so it's hard to stay off the hype train. 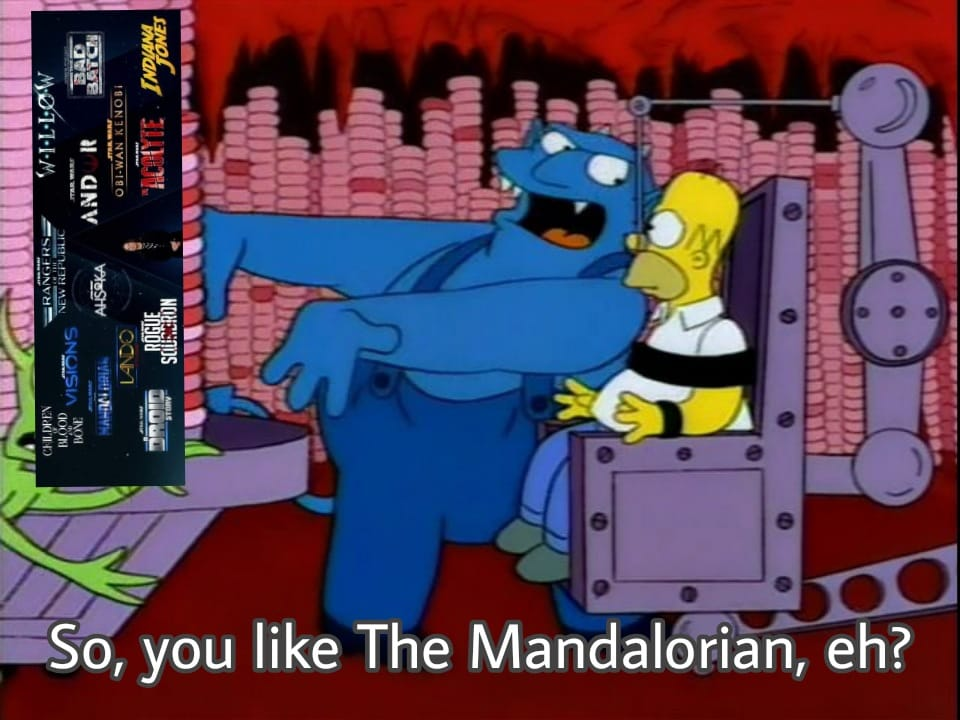 On top of that, let's give $20 million to Taika Waititi and Mark Hamill for a new Star Wars Holiday Special!
Top

I didn't even bother watching the last season because the prior one was so bad. They're The Simpsons now.
Top

I'm STILL only 5 seasons into it's always sunny. But let's not go saying things we can't take back!
I mean it's not like the creators of it's always sunny made a second show that from the second the new show aired made the old show completely redundant on EVERY SINGLE LEVEL.
And it's not like their second show got cancelled and brought back 3 times and then a 3rd show was launched and picked up for a second season... All while the original just kept going.
Nah, they're a while off being the Simpsons.

Also I don't like that Archer is coming back... Can I trade in the past 4 seasons of Archer and the new season for ONE SINGLE SEASON MORE OF FRISKY DINGO??
If I should Die Hard Arcade before I Alan Wake.
PREY the Lords of Lore my Soul Calibur to Take-Two Interactive.
Top

This makes me angry! It should be season 10.
From season 1-8 they would have 2 seasons of 6 episodes a year, and sometimes a special.

This was the PERFECT DELIVERY TIME and amount.

It was enough to keep coming back for more, and you didn’t forget the show existed because they took an 18 month gap.

And then they start doing a live show, sign up to an American network and covid hits and it’s a full year between season 9 and 10...

They need to release 5-10 episodes on Christmas Day, and then the next 5-10 on Canada Day.

Time to leave this world behind!
If I should Die Hard Arcade before I Alan Wake.
PREY the Lords of Lore my Soul Calibur to Take-Two Interactive.
Top

In a special final episode, Caillou finally succumbs to the leukemia he's been battling for years
Top

does this sound like they just squashed a 2 part opening into 1 show to anyone else?

Superman & Lois To Get 90-Minute Premiere, The Flash Moves to March

The series premiere of The CW's Superman & Lois will be a 90-minute affair, complete with a half-hour special celebrating the launch of the network's first official Superman show. Smallville kicked off the modern superhero-TV boom with a decade-long look at Clark Kent's early years and Supergirl -- inherited by The CW from sister network CBS -- has tackled the superheroic tales of the Man of Steel's cousin Kara. But Superman & Lois will be the first live-action TV series with "Superman" in the title since Lois & Clark: The New Adventures of Superman went off the air in 1997, and that's cause for a night of celebration.

The celebratory night of Super-storytelling will come at a cost: The Flash, the network's highest-rated show and their flagship DC superhero series now that Arrow is gone, will debut on March 2 rather than February 23 as originally planned.

Superman & Lois will debut its extended pilot on February 23, followed by a half-hour special called Superman & Lois: Legacy of Hope, which will feature sneak peeks at upcoming episodes, cast and crew interviews, and other super-fans weighing in on the impact of Superman and Lois Lane.

In Superman & Lois, after years of facing megalomaniacal supervillains, monsters wreaking havoc on Metropolis, and alien invaders intent on wiping out the human race, the world's most famous superhero, The Man of Steel aka Clark Kent (Tyler Hoechlin, Teen Wolf) and comic books' most famous journalist, Lois Lane (Elizabeth Tulloch, Grimm), come face-to-face with one of their greatest challenges ever - dealing with all the stress, pressures and complexities that come with being working parents in today's society.

Complicating the already daunting job of raising two boys, Clark and Lois must also concern themselves with whether or not their sons Jonathan (Jordan Elsass, Little Fires Everywhere) and Jordan (Alexander Garfin, The Peanuts Movie) could inherit their father's Kryptonian superpowers as they grow older. Returning to Smallville to handle some Kent family business, Clark and Lois are reacquainted with Lana Lang (Emmanuelle Chriqui, Entourage), a local loan officer who also happens to be Clark's first love, and her Fire Chief husband Kyle Cushing (Erik Valdez, Graceland).

The adults aren't the only ones rediscovering old friendships in Smallville as the Kent sons are reacquainted with Lana and Kyle's rebellious daughter, Sarah (Inde Navarrette, Wander Darkly). Of course, there's never a dull moment in the life of a superhero, especially with Lois' father, General Samuel Lane (Dylan Walsh, Nip/Tuck) looking for Superman to vanquish a villain or save the day at a moment's notice. Meanwhile, Superman and Lois' return to idyllic Smallville is set to be upended when a mysterious stranger (Wolé Parks, All American) enters their lives.

It will only have Frasier because David Hyde Pierce and Jane Leeves already said they aren't interested in playing n the characters again and the guy who played the father died.
Top
Post Reply
330 posts