I heard the Lakers are putting up the best offer for Westbrook right now.
Top

Bandit wrote:I heard the Lakers are putting up the best offer for Westbrook right now.

Yep that's what I've heard too. The Wade talk has been squashed as he's not willing to accept the 3.5m vets minimum. I think the Westbrook to Cavs rumors were started via Paul Pierce's Twitter. Going back to D Wade he wants 50m over 2 years so his options are limited to those with enough cap space or willing to pay big money luxury tax. Miami are offering 40m and The Nuggets, Bulls and Bucks are all in the mix. So the big proposed moves were just rumors!
Top

Plus the ones which started it all:

SAN ANTONIO (July 11, 2016) – San Antonio Spurs forward Tim Duncan today announced that he will retire after 19 seasons with the organization. Since drafting Duncan, the Spurs won five championships and posted a 1,072-438 regular season record, giving the team a .710 winning percentage, which is the best 19-year stretch in NBA history and was the best in all of the NBA, NFL, NHL and MLB over the last 19 years.

Originally selected by the Spurs as the first overall pick in the 1997 NBA Draft, Duncan helped San Antonio reach the playoffs in each of his 19 seasons and became the only player in league history to start and win a title in three different decades. The Silver and Black won at least 50 games the last 17 seasons, the longest streak in league history, and posted at least a .600 winning percentage in each of Duncan’s 19 seasons, an all-time record for most consecutive seasons with a .600 win percentage in the four major U.S. sports.

The 40-year-old Duncan comes off of a season in which he led the NBA in Defensive RPM (5.41) and became just the third player in league history to reach 1,000 career wins, as well as the only player to reach 1,000 wins with one team. He helped the Spurs to a franchise-best 67-15 record and also became one of two players in NBA history to record at least 26,000 points, 15,000 rebounds and 3,000 blocks in his career (Kareem Abdul-Jabbar).

Along with teammates Tony Parker and Manu Ginobili, Duncan is part of the NBA record for most wins by a trio in both the regular season (575) and postseason (126). Duncan and Gregg Popovich have the most wins by a player-coach duo in NBA history (1,001) and the Spurs forward finishes his career in San Antonio as one of just three players in NBA history, along with John Stockton and Kobe Bryant, to spend 19 seasons with one franchise.

Tim Duncan is one of my favorite NBA players. He's also somebody who was a great representative for the NBA and he excelled in his career, the stats above prove that he is rightly lauded as a future Hall of Famer. San Antonio and Greg Popovich will definitely miss his presence on the court next season and beyond, because of the impact he had on the team but I think they are in good hands with Kawhi Leonard who may be a long tenured Spur too like Tim was. He also was part of 2 great Spurs teams, the first alongside David Robinson and the second with Parker & Ginobilli which only recently won the NBA championship in the 2013-14 season.
Top

He didn't get enough respect for a guy with 5 rings. Same number of championships Kobe won, but he was never regarded as important to the NBA. The media always hated it when the Spurs won.
Top

Yea that's very true. I think whilst he was a great player he didn't really have the media presence of a MJ or a Kobe, even a Allen Iverson. If he did, I'm sure he'd have been touted alongside them as an All-Time great. Whilst in theory he should be, he like you say has 5 championship rings, but because Mike was a megastar in his prime and Kobe was a superstar, Tim Duncan really never reached the heights he should have. I mean, I can't think of another sports star who was hugely successful yet didn't become a big, big star in the modern era. Found this article which might explain why Tim wasn't ever the big superstar he should have been.


Tim Duncan has hung up his sneakers, ending one of the most awkward careers in NBA history.

The first overall pick of the 1997 NBA Draft, Duncan was the perfect player for a San Antonio system that wasn’t big on egos — just winning. He came into the league as David Robinson’s understudy, taking a backseat to the Spurs' All-Star big man despite his other-worldly talent.

Duncan would take from Robinson the mantle of the team’s best player during his sophomore season, when he helped lead the Spurs to their first NBA championship. He would go on to win four more.

Duncan’s greatness, however, was largely overlooked during his playing career.

Ironically, that lack of a defining skill helped him become widely regarded as the greatest power forward to play the game. Perhaps no big man outside of Kareem Abdul-Jabbar has had a deep and varied skill set as the man Shaquille O'Neal once dubbed "The Big Fundamental."

One of the most consistent players in NBA history, Duncan came into the NBA as one of the top five players in the league and stayed there for nearly a decade and a half, before age and injuries started to take their toll.

The other reason he never resonated with the casual fan: He didn’t want to.

Duncan didn't want to be an icon. He just wanted to play the game, win and go home.

In a basketball world full of athletes that demanded our attention, Duncan eluded it. Once the Spurs' season was over, which was often June, you didn't hear from him until the ball got rolling again in October. There were no vacation photos on tropical beaches on blogs or rants on social media.

Yeah, he was closer to Karl Malone than MJ. But he didn't have Malone's aura as the guy who wasn't the most gifted but worked the hardest, which made him beloved. Since you could never be Jordan, but maybe you could be Malone.
Top

Yea, whilst in theory if he had the personality of say a Dwight Howard mixed in with his on court skills hed have been the face of the NBA for almost 20 years, or atleast when Mike retired. But when you think about Tim was almost the 3rd man on the Spurs team. You have Tony Parker as their big star although now its arguably Kawhi with Manu as the other star. Tim Duncan was almost anonymous in a sense of his off court presence. When you hear like about Draymond Green getting into a fight with a hater it kinda highlights how much of a classy guy Tim Duncan is. I think he's the true definition of a professional basketball player and somebody who if I were a NBA coach ID have a team of Tim Duncan's who don't cause no drama and who deliver on the court. Whilst the Metta World Peace, Rodman, AI etc are big characters they require a lot of man management and somebody like Tim must have been a great person to work with and I think Greg Popovich will miss him not only in the court but around the team. Maybe Pop will keep him around on his coaching staff as a guy with 5 rings and above all seems a great guy is somebody you should keep around and guys like Kawhi Leonard will learn a massive amount from him and he seems kinda like a Duncan 2.0 as there's no drama surrounding him either.
Top

Something nasty just happened in the NBL.

That's the least dysfunctional thing to happen to that team this week.
Top

They should let him coach to get the team back in gear. Melo needs an angry middle aged man to scare him from missing all those shots.
Top 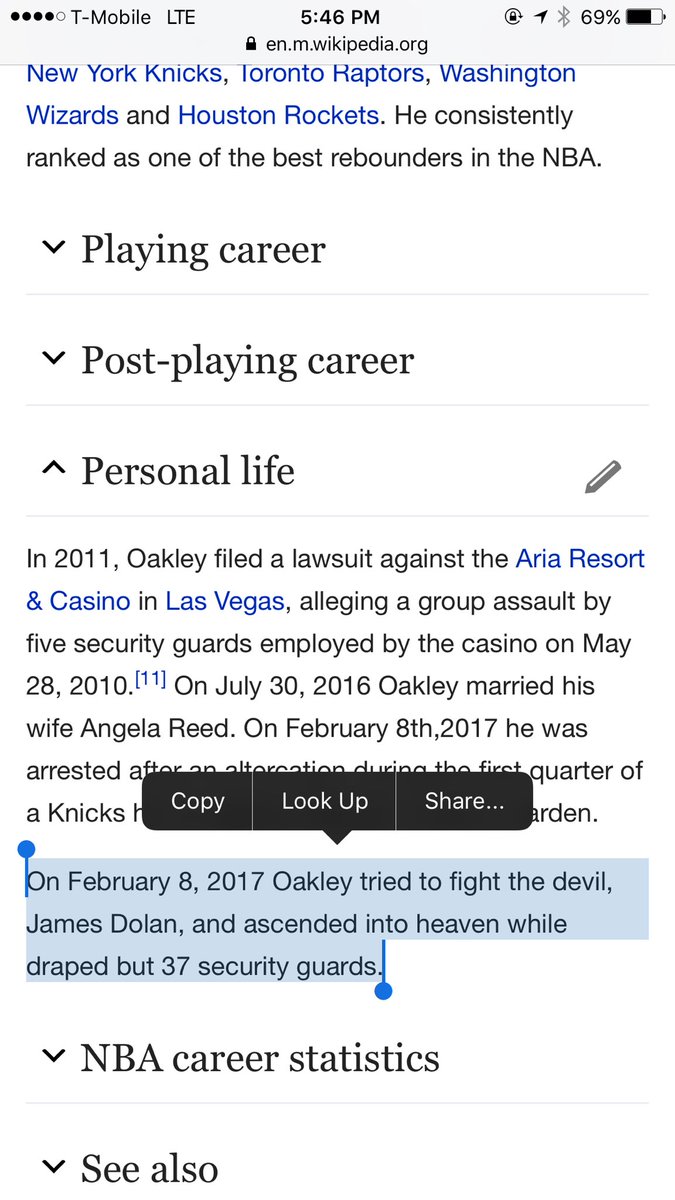 Let him fight Kendrick Perkins to see. I'd buy that on PPV.
Top

Charles Oakley gets ejected and arrested for having the audacity to voice his disapproval of the Knicks which he has every right as a paying customer to do. Granted he went the wrong way about things but still, what a way to treat a former Knick. I'm hoping his former team mates and coach(s) stick by him. If this was the NFL I'd strongly wonder whether he was acting this way because of CTE. However I'm not sure how much head trauma NBA players have so maybe he was just pissed at the Knicks owner. When really every Knicks fan should be. If Phil Jackson can't fix them then you know there's an major issue.

As for Kendrick Perkins vs The Oak. Spike Lee as the special enforcer~!
Top
Post Reply
339 posts