Democracy is dead, time to start stocking up on the weapons & barricades it seems
Top

I won't be surprised if mass riots break out once the "decision" is officially announced. Again they should have never let the general populace make a decision they weren't fully conversant with. It was a matter MPs, business leaders etc should have all discussed together, in detail and weighed the pros and cons.

A no deal Brexit is the very worse scenario since there's no agreements in place and that could mean the EU countries play hardball and not want to trade at all, they hold all the cards essentially. What's concerning is that it will be the default scenario if they don't get their act together and sort out this mess they've made

if the eu countries try to cut us out then they are shooting themselves in the foot, personally I'd be happy if they did it in theor heads, they tanked their economies with the euro & relies on us to bail them out (we sure as hell didnt get much if anything in return). Basically they need us to still be on decent terms with them ot they are screwed (& not in a fun way)
Top

However the U.K. could bailouts itself if a No deal Brexit happens


A no-deal Brexit could require U.K. government bailouts like those following the financial crisis to prevent businesses from going bankrupt.

Germanys economy is stronger than ours, I believe we are second, France in third. So we are t on that stronger footing as some are suggesting. Ideally we need to have trade agreements in place with the other EU countries. As like I've said we don't have the level of demand for exports that some countries do.


Mechanical machinery was the most valuable commodity with exports being worth 48.5 billion British pounds.

So we import almost as much mechanical machinery as we export.

When will the madness end?

It's going to be great when they regulate milkshakes.

"Oi, you got a a loicense to carry that milkshake, mate?"
Top

Didn't they just basically all move to another party with the same policies to try to get away from negative name brand value? I don't know about your politics, but I saw Nigel Farrage on our news this morning bragging about a big victory and claiming they'll win 600 seats next time. But before I was hearing Boris Johnson (aka Donald Trump's long lost brother) being a favorite to be the next Prime Minister. But maybe the US news gets British politics wrong. 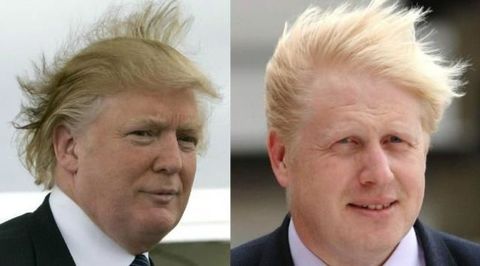 They need to go on Maury Povich for a DNA test.

And Nigel Farrage looks like a Spitting Image puppet of himself.
Top

Bandit wrote: ↑
Tue May 28, 2019 12:23 am
Didn't they just basically all move to another party with the same policies to try to get away from negative name brand value?

Farage left UKIP to form a new party, mainly comprised of ex Tory and Labour MPs (which gives it far more legitimacy than UKIP, hence the huge amount of support after only 6 weeks of being in existence) The Brexit Party has one goal, a "no deal" Brexit.

After the Referendum UKIP were pretty much redundant, ableit still occupying a certain amount of seats. With the resurgence of the Lib Dems and the Greens, UKIP ha e ended up with no seats, which means they're effectively dead in the water now.

The final nail was in the coffin, but after having the likes of Sargoon, Tommy Robinson, Count Dankula and Paul Joseph Watson joining the party, they've set that coffin on fire.

Farage was gone anyway at that point, but obviously, any sane Politian would want to distance themselves as far as possible from that that lot.

Boris Johnson is the new PM

Everybody wanting a "Peoples Vote", will have it in the form of a General Election, each party has a clear position now, even Labour (only took four years to decide

Breaking news: Trump likes England again at least for the next 24 hours.
Top

There is a very high possibility of a General Election being called before the EU calls time on the UK with the whole Brexit mess. The public should have demanded a overall vote of no confidence in the Tory government when Teresa May couldn't handle Brexit negotiations and forced one much earlier so plans could be in place for the future.

I see Boris making an even bigger mess of things and it could make things unsalvageable down the line if the right decisions aren't made. He doesn't seem competent enough to handle such an important matter. He's intent on leaving the EU too so won't be dissuaded in changing to "remain" which makes the most logic sense. His bubbling buffoon act is all smoke and mirrors too I actually won't be surprised if he declares war with Iran as soon as his feet are under the table at 10 Downing Street.
Top

The Labour leader was also not impressed as he tweeted: "Johnson's No Deal Brexit would mean job cuts, higher prices in the shops, and risk our NHS being sold off to US corporations in a sweetheart deal with Donald Trump.

Just listened to an interview with Jo Swinson on the BBC. She was asked if she would accept the outcome of a second referendum if the result was the same again.
She tried to dodge it but the answer was obviously no. Not very Liberal or indeed democratic.


Nicola Sturgeon said Mr Johnson should be in no doubt about the gravity of the situation he is about to inherit as PM.
And she pledged to work with other parties to "stop Brexit and block a no-deal Brexit".