Red Dwarf is back on ABC Comedy in Australia starting tonight at 10:35. It's on 5 nights a week. Yay!
Top

That is all I will be saying in this thread untill I am watching series 13...

Recently been watching 1-8 though. Working my way up in anticipation... of series 13!
If I should Die Hard Arcade before I Alan Wake.
PREY the Lords of Lore my Soul Calibur to Take-Two Interactive.
Top

OFFICIAL: The Boys from the Dwarf are returning to Dave in 2020!

The wait is over. We're delighted to announce that Red Dwarf will return to Dave next year for its first ever feature-length special. Craig Charles, Chris Barrie, Danny John-Jules and Robert Llewellyn are back as Lister, Rimmer, The Cat and Kryten, in an all-new story written and directed by Doug Naylor and produced by Baby Cow Productions. 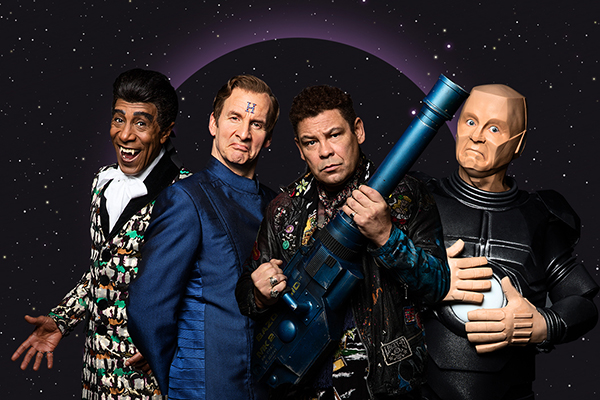 "I'm really excited to get back on board with the boys from the Dwarf," says Craig. "I can't wait to discuss Robert's prostate problems, Chris Barrie's hip replacement and have a proper look at Danny's new dentures whilst they marvel at the agelessness of the Charles physique. I will surely require the services of a chiropractor after dragging these doddering misfits through what promises to be our most epic adventure yet. Dave Lister, the human race's last hope in a hostile universe. God help us. And may the Dwarf be with you."

"I'm absolutely thrilled to have the opportunity of making more Red Dwarf," adds Doug. "UKTV have been a never-ending source of support and encouragement since we first started working together ten years ago. Can't wait to start shooting a format that I don't think has ever been done before. Smoke me a kipper, we're back and not just for breakfast."

The special will be filmed on location and at Pinewood Studios in front of a live studio audience, and is produced by Richard Naylor. Christine Langan is executive producer for Baby Cow.

And as if that wasn't enough, we've got something else exciting to announce, too. To celebrate the return of the small rouge one to our screens, UKTV has also commissioned a series of retrospectives - three 60-minute documentaries which will offer fans the definitive story of the show from day one right up to now. These retrospectives, produced by North One, will include a wealth of rare and unbroadcast material, as well as new interviews with cast and crew.

"Our relationship with Red Dwarf has been incredibly fruitful and satisfying so far," says UKTV's Head of Scripted Pete Thornton, "and it's been a real pleasure to see the cast and crew fully committed and seemingly enjoying themselves more than ever in the run up to this latest production. We've been talking to Doug and the team about how to take Red Dwarf forward and the special clearly offers us an exciting next step. It's going to be a proper event in the history of the series."

"I am a huge, life-long fan of Red Dwarf and I still re-watch it and re-read the books regularly to this day," adds Luke Hales, Dave's channel director. "So it goes without saying that it gives me huge pleasure to be a part of the team this time around. I am as excited about this one as a viewer as I am in my role as channel director on Dave. The episodes we've made for the channel so far have been brilliant, and what a way to welcome it back too, with a feature-length special and three-part look back at the show's history. We at the Dave team literally cannot wait to bring this huge treat to our viewers."

So then, what about the audience filming? Well, it's taking place across two dates, on Friday 6th and Friday 13th December. To get your hands on tickets, you need to head on over to Lost in TV and enter the ballot for tickets - as with the last series, tickets will be allocated by way of a random draw, ensuring that it's not just a case of first-come first-served once the link goes live!

The ballot opens at 12pm today (Friday 18th October) and will close at midday on Monday 21st. So you haven't got a ton of time to get in there, but it should be plenty of time to ensure you get your name in even if you're not in the initial rush! Successful applicants should be notified by Friday 8th November, and as with Series XI and XII, there'll be no overselling - if you've got a ticket, you're in the audience!

Phew. So there you have it: brand new Red Dwarf, and it's going into production very soon. We'll bring you all the latest sneak peeks and updates from behind the scenes as soon as things kick into gear. Excitement Mode: ENGAGED.

RED DWARF IS GETTING ITS FIRST FEATURE LENGTH STORY... WOW, in a world where ‘back in the red’ and ‘Back to Earth’ have been feature length AND existed since 1999 and 2009, I’d rather have another series 12.. that was great.

If it doesn’t have Holly back, or explain how Rimmer escaped in only the good, they seriously shouldn’t bother.

Smeg Heads.
If I should Die Hard Arcade before I Alan Wake.
PREY the Lords of Lore my Soul Calibur to Take-Two Interactive.
Top

A 2 hour special in front of an audience, it should be interesting to see how it ends up. And then hopefully we get season 13 after that.
Top

If it's a feature length special, then Series 13 that would be good. The three documentaries should be interesting and the rare/unseen footage will be cool, unless it's just clips from Smeg Ups.
Top

Big Boss Man wrote: ↑Wed Oct 23, 2019 10:13 pm If it's a feature length special, then Series 13 that would be good. The three documentaries should be interesting and the rare/unseen footage will be cool, unless it's just clips from Smeg Ups.

I'm more interested in the docos than the actual *NEVER BEFORE DONE FEATURE LENGTH RED DWARF *Excluding 1999, and 2009 Red Dwarf.

I really hope the doco's aren't just repeating content as well. Red Dwarf has always (Since DVD's) had AMAZING special features, and behind the scenes stuff that puts the rest of the entertainment industry to absolute shame.

No reason to doubt on the special front.. Even if we're getting a Red Dwarf format we've already seen twice before in 2 decades...

Also, something has been pissing me off... back to earth takes place after series 9... WHAT... so we're still due for a series 9???

Been waiting 20 years now to find out how Rimmer survived series 8 ending... TWENTY YEARS!
HOW THE FUCK DID HE ESCAPE????? All I know is that it was a fluke...
If I should Die Hard Arcade before I Alan Wake.
PREY the Lords of Lore my Soul Calibur to Take-Two Interactive.
Top

I wonder if there's any significance or superstitions regarding the numbers 9 and 13, as that might be why 9 was skipped and no series 13 has been mentioned. There's also some continuity issues so if they do conclude the show they have quite a few questions that need answering.

But the docs should be very good. Dave used some rare Only Fools footage for that multi part documentary which I don't think was ever seen before or put on VHS/DVD. So they might have uncovered some rare Red Dwarf footage which would be cool to see.
Top

Here is your exclusive FIRST LOOK at the new poster for Red Dwarf: The Promised Land!
Landing on Dave April 2020. 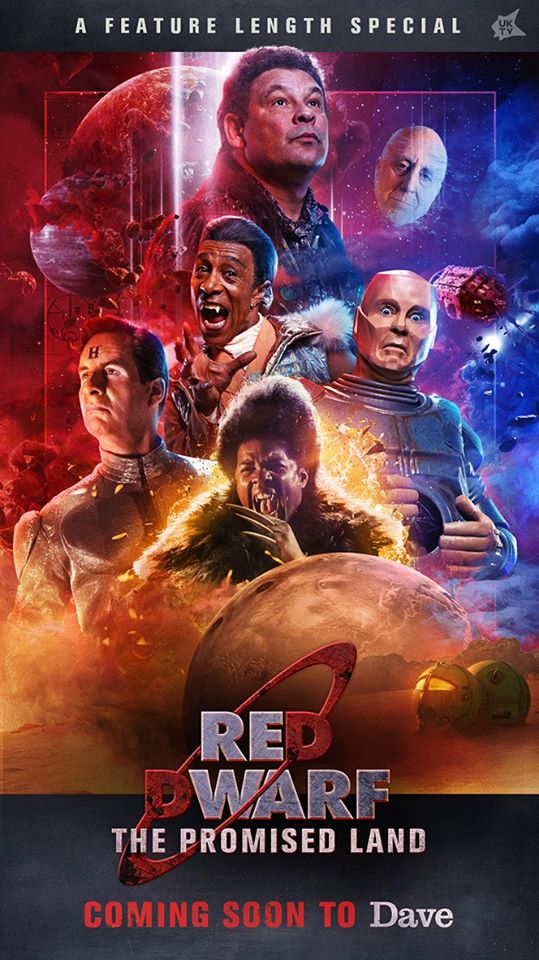 Good to see holly is on the poster.
If I should Die Hard Arcade before I Alan Wake.
PREY the Lords of Lore my Soul Calibur to Take-Two Interactive.
Top

My UK version of Seasons 1 - 8 Just the shows came in.
Top

"Have you considered opening the door?"

Up there with "it's Monday, and you're in a corridor"
Thank god Holly is back!

I have just done a complete watch through of the whole lot, but I'm gonna have to do another one before this comes out.

Still rather a series 13 though

Well, I liked it! Turns out what Red Dwarf has been missing all this time is Holly!

ALSO.. it wasn't feature length, it had credits half way through (at least in the version I got!
If I should Die Hard Arcade before I Alan Wake.
PREY the Lords of Lore my Soul Calibur to Take-Two Interactive.
Top

ALSO.. it wasn't feature length, it had credits half way through (at least in the version I got!