The incident occurred on the set of “Rust,” an independent feature that was filming at the Bonanza Creek Ranch, a popular production location south of Santa Fe.

Hutchins, 42, was transported by helicopter to University of New Mexico Hospital in Albuquerque, where she died. Souza, 48, was taken by ambulance to Christus St. Vincent Regional Medical Center in Santa Fe, where he is undergoing treatment for his injuries, according to the Santa Fe County Sheriff’s office.

The Sheriff’s office said in a statement that Hutchins and Souza “were shot when a prop firearm was discharged by Alec Baldwin, 68, producer and actor.”

No one was arrested in the incident, and no charges have been filed, the office said. Detectives were interviewing witnesses, and the incident remains under an “open and active” investigation, according to the Sheriff’s office.

Baldwin’s reps did not immediately respond to a request for comment.

Hutchins’ death was confirmed by the Sheriff’s office and by the International Cinematographers Guild, Local 600.

“We received the devastating news this evening, that one of our members, Halyna Hutchins, the Director of Photography on a production called ‘Rust’ in New Mexico died from injuries sustained on the set,” said John Lindley, the president of the guild, and Rebecca Rhine, the executive director, in a statement. “The details are unclear at this moment, but we are working to learn more, and we support a full investigation into this tragic event. This is a terrible loss, and we mourn the passing of a member of our Guild’s family.”

The Sheriff’s office received a 911 call reporting the incident at 1:50 p.m. Mountain Time.

“The Santa Fe County sheriff’s office confirms that two individuals were shot during filming of a scene on the set of the movie western ‘Rust’,” the office said in its initial statement. “According to investigators it appears that the scene being filmed involved the use of a prop firearm when it was discharged. Detectives are investigating how and what type of projectile was discharged.”

Hutchins graduated from the American Film Institute in 2015, and had worked on several short films before shooting “Archenemy,” a 2020 feature starring Joe Manganiello. She was named a “rising star” by American Cinematographer in 2019.

“She’s a wonderful, positive, creative person that was so excited to be breaking through and making movies,” said Michael Pessah, a cinematographer who was a friend of Hutchins’. “She was really on the upswing.”


Baldwin is a co-producer on the film and plays infamous outlaw Rust, whose 13-year-old grandson is convicted of an accidental murder. Ackles plays a U.S. Marshal and Fimmel plays a bounty hunter who are on the pair’s tail as Rust tries to break his grandson out of prison. An unexpected bond forms between the outlaw and his estranged grandson as they go on the run.

New Mexico is a busy film location, and the Bonanza Creek Ranch has hosted productions including “Hostiles,” “Cowboys & Aliens,” “3:10 to Yuma,” “Appaloosa” and “Longmire.” 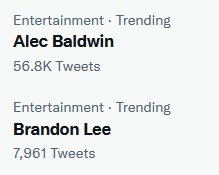 I feel bad for Baldwin, and for the woman and her family too, of course. It's a fucked up situation.
Top

A woman on a recent Delta Airlines flight allegedly began to breastfeed her pet cat mid-flight and refused to stop after getting caught.

The incident allegedly happened during a recent trip onboard Delta Flight 1360, a route that travels between Syracuse, New York and Atlanta, Georgia. An image posted to social media suggests that the purported cat breastfeeding happened while the plane was headed towards Atlanta, although it is not clear exactly when the incident happened.

The image circulating online describes the supposed event in what appears to be a screen capture of message sent using the Aircraft Communications Addressing and Reporting System (ACARS), which pilots use to transmit short text-based messages to the ground.

The message reports that a passenger is seat 13A "is breastfeeding a cat and will not put cat back in carrier" in response to a request from a flight attendant. The message asks that the situation be addressed by the airline's "Red Coat" team upon landing. Delta describes members of the team as "elite airport customer service experts" who are "specially trained to handle on-the-stop customer issues."

Beyond the purported ACARS message, which Newsweek has not independently verified, little other information about the supposed incident was available as of Friday.

However, a TikTok account from flight attendant Ainsley Elizabeth appears to refer to the incident, with a video posted on November 2 claiming that "security met the flight because a woman was breastfeeding her cat."

"This woman had one of those, like, hairless cats swaddled up in a blanket so it looked like a baby," Ainsley Elizabeth said in a follow-up video posted on November 13. "Her shirt was up and she was trying to get the cat to latch and she wouldn't put the cat back in the carrier. And the cat was screaming for its life."

"What does she do at home if she's doing that in public?" she asked. "And then security met the flight just to tell her that she couldn't do that again, cause it was weird and gross."

"Delta fully supports a woman's right to breastfeed on board Delta and Delta Connection aircraft and in Delta facilities," the airline's policy states. "Breast pumps are allowed on board. At the airport and if you prefer, many airports do offer private lactation rooms or spaces. Ask a Delta associate if you need assistance locating one at an airport."

Although Delta policy also allows pets including cats to travel on flights, animals are required to "remain inside the kennel (with door secured) while in a Delta boarding area (during boarding and deplaning), a Delta airport lounge and while on board the aircraft."

Most airlines around the world have also recently tightened policies on "emotional support animals" flying after a series of incidents involving passengers demanding that creatures like peacocks, ferrets, horses, ducks and snakes be allowed to accompany them.

Delta no longer allows emotional support animals to fly, following a new rule from the Department of Transportation that states the animals do not qualify as service animals, a category that includes only trained dogs.