Has she met Vince yet?
Top 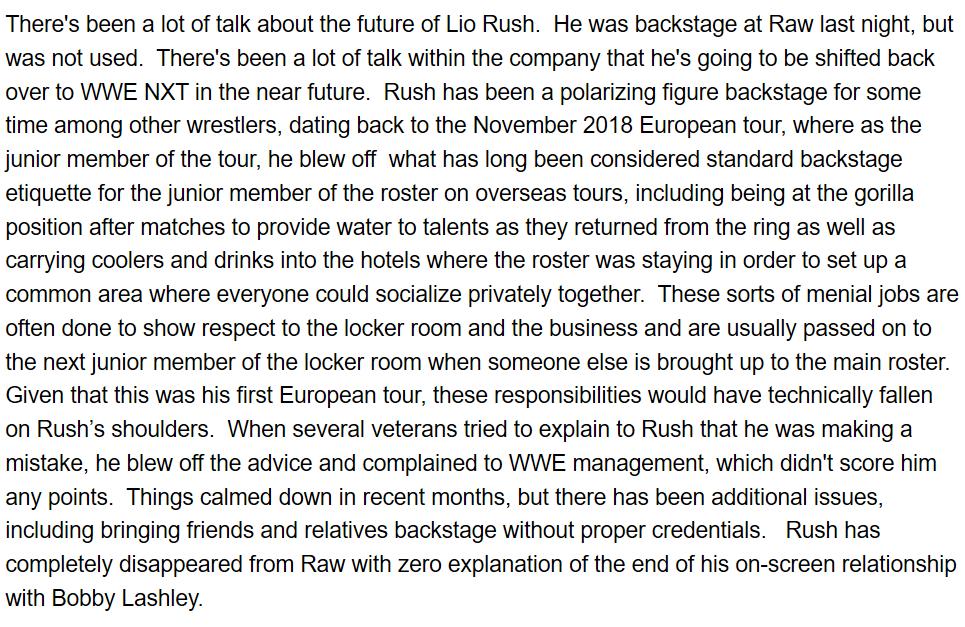 There are hash marks shown in the video as Moxley is breaking out of prison. The portion that is lit adds up to 25, which could be a teaser for Double Or Nothing. Double Or Nothing takes place on Saturday, May 25 from Las Vegas.

Some people have speculated that Moxley is initially in an asylum at the start of the video, and it's Jon Moxley escaping from the Ambrose Asylum.

There are dice shown in the video and that has been the main symbol in promotional material for Starrcast in Las Vegas, which also takes place on May 25 (the event runs from May 23 - 26). The numbers on the dice shown are 2 and 5.

It's believed that Moxley would be able to appear at Double Or Nothing as he is not under a non-compete clause from WWE because those usually apply to releases. His contract expired.

Fans on social media have also pointed to how Ambrose is being chased by a "big dog" after breaking out of prison. Could this be a reference to Roman Reigns?

Goldberg is going to be on the next Saudi show.
Top

They love the Jewish people there.
Top

well about the best bit or Raw was the reaction to that firefly fun house bit as one commentater could only say
"thats cool, I never wanted to sleep again anyway, thats fine"
Top

LOL I was thinking that too when posting.
Top

Daniel Bryan is cleared to return next week.
Top

their way out of this. Isnt the Fox deal dependent on hitting ratings targets?. They could air a block of old Simpson episodes in that time slot instead which would get higher than a 1.38.

Plus Daniel Bryan's putting himself at further risk by keep continuing on. I get he loves wrestling but he should go down the performance centre and train the rookies and not put himself at risk of permanent injury. Doesn't he just have to fail one concussion test and he's done?.
Top

The hope is that FOX promotes the shit out of WWE especially during NFL games and will help it. They can promote it hard during Thursday NFL games and then Smackdown airs the next day. But they did that for UFC and UFC only had a few big ratings and mostly average ratings. Granted UFC couldn't put their superstars in fights on free television and if WWE wants Brock or Cena or Ronda on Smackdown they can do that. But if the show sucks they're just going to be popping ratings and then going back down after things go back to the normal roster.
Top

Yea, thats a good point. But it's really if there's the interest in the mainstream audience to tune in to watch WWE. They'll always have their loyal audience who will tune in, however bad the product is, but the goal is to bring in non fans to watch the show and keep them around to buy merch, buy tickets to live events and subscribe to the network. That's the audience they definitely need to attract to bump the ratings back up to Attitude Era type levels. Say they brought in Conor McGregor, he might be the equivalent of when they brought Iron Mike in, with the media reporting it etc.and the fans who tune in to see Conor might stay around. I think anyone wanting to see Brock and/or Ronda would have tuned in already and either stuck around, or tuned out.
Top

With Conor Vince is going to think he's too small and he doesn't follow MMA so he probably doesn't understand how big of a star he really is. He is. Another problem is he can't stop swearing so they're going to freak out when he starts saying "fuck" on live television. He's also going to be showing up drunk if he's just there to talk lIke he's drunk at most of the UFC press conferences. I really don't know what role they'd have for him besides a mixed tag team with Becky. There's no heels he'd be good with. Daniel Bryan's gimmick wouldn't work against McGregor, and doing a match between McGregor and Brock would cost a fortune, plus they wouldn't want a small guy on offense against Brock and Conor isn't going to take 25 German suplexes.
Top

Yea, but that's the thing, just let him be Conor McGregor

They missed out on letting Ronda just be an ass kicking machine where she doesn't come out smiling at the fans & cutting promos. They should have put her with Paul E where he has two bad asses and let him do his whole schtick.

But going back to Conor, just have him turn up and stir it up. Plus he's the Ric Flair/Gino Hernandez heel, you could turn Bryan back face and have them work a program. Shame it's not the Attitude Era because you could have got major mileage out of having Conor just cut one of his trademark promos.

That would get the mainstreams attention too which is key for the Fox deal to pay dividends. Outside of Conor maybe Jon Jones or DC doing a pull apart with Brock might get that mainstream buzz. Or they bring in Joanna to get in Beckys face. But knowing Vince as we do, he's probably going to throw millions at Gronk to form the Hyped AF Bro's with Mojo

They rarely do celebrity heels, though. Like Floyd Mayweather is clearly a heel (that has fans) in boxing, but WWE made Big Show the heel. You had K-Fed as a heel in his two week run and the Saturday Night Live guys this year but that wasn't serious. Kid Rock and Joe C, Snooki, Floyd, Trump, Mickey Rourke, Schwarzenegger, Tyson (although he was a heel for a few weeks he ended up a face), Pete Rose, and Mr. T were all babyfaces. Even though the original celebrity wrestler Andy Kaufman was a total heel. But I think Vince has an idea that if he's bringing in a star he needs to present them in a positive light so their fans will want to watch them.
Top

-Believes Daniel Bryan had a concussion during his Wrestlemania match because WWE was even trying to cover it up within the company.

-Jeff Hardy could be out a year with full reconstructive knee surgery.

-WWE ratings being awful may affect the AEW TV deal. Because of talk the WWE TV deals may be a bust before the FOX show even airs.

-Thinks the rest of the year will be a nightmare for ratings since they drop in June for the NBA championship games and September-December for the NFL.

Bandit wrote: ↑
Fri May 03, 2019 6:16 am
They rarely do celebrity heels, though. Like Floyd Mayweather is clearly a heel (that has fans) in boxing, but WWE made Big Show the heel. You had K-Fed as a heel in his two week run and the Saturday Night Live guys this year but that wasn't serious. Kid Rock and Joe C, Snooki, Floyd, Trump, Mickey Rourke, Schwarzenegger, Tyson (although he was a heel for a few weeks he ended up a face), Pete Rose, and Mr. T were all babyfaces. Even though the original celebrity wrestler Andy Kaufman was a total heel. But I think Vince has an idea that if he's bringing in a star he needs to present them in a positive light so their fans will want to watch them.

That's why WWE is so out of touch. Out of the list, only really Mr T should have been portrayed as a babyface. Throwing millions at Conor to be a baby face would just completely suck. Because it's not believable. He could be the biggest heel in the company in one week because theres no big breakout star now. I see the point about size but they had Show tower over Floyd and they put him over huge as a credible threat. Same with Conor, he has the legit credentials to be seen as a big deal. You don't have to have him even wrestle just work a program with say Becky to give her the Superstar push. But don't put him with Shane, Vince, Steph or Hunter, because that serves no purpose. I think like McGregor/Bryan (if he's back as a face) or McGregor/Cena would work. There's a size difference with Cena, but, we're talking about a guy who with his whole ego/braggacio is on a gigantic level and that comes across to the audience which is why he was such a huge draw for the UFC. WWE are lacking that real legit star like they had with Rocky and Stone Cold and before them, Hogan. Which is why they should look outside the wrestling realm for a mainstream celeb who's whole persona they can easily add into their product. Because Conor is essentially being old school era Ric Flair and he's someone who could bring a ton of mainstream interest again like Mike did in the late 90s.
Top

I don't think he'd help Becky. For starters she should have already gotten a rub from a UFC superstar and yet no one cares. What happened should have been like if Austin beat Tyson in a match, but there's zero buzz for her besides her fans swearing she's going to break into the mainstream any day now. I gave her the benefit of the doubt she could make something out of Wrestlemania, but she hasn't at all. In fact things are worse for WWE.

And it would actually make her look bad because Conor is so much better on the mic than she is and she does his act. It would be like if a Rolling Stones cover band was playing and then the real Mick Jagger came on stage to sing a song with them: the wannabe would look ridiculous the rest of the show.
Top
Post Reply
3150 posts