That women's match pissed me off. Glad the women didn't offend anyone there, having to wrestle while dressed as mummies.

Keep siphoning off my hate for TNA and taking it for yourselves please, WWE.
Top

Although I will say this. They have a gem with the Fiend right there - he's money - if they don't fuck it all up.
Top

As noted, WWE has been dealing with flight issues in Riyadh, Saudi Arabia that will likely prevent some of the SmackDown Superstars and crew from making it to the KeyBank Center in Buffalo, NY for tonight's live episode on FOX. You can click here to read our original report.

In an update, PWInsider reports that the "majority" of those delayed leaving the Kingdom for SmackDown will not make the TV tapings and are now at hotels in Riyadh. It was said that there is no word yet on when the talents and crew are now leaving to return to the United States.

WWE officials have made arrangements to try and get those "absolute necessary" for SmackDown to Buffalo, but nothing has been confirmed.


It was also noted that there are a lot of people within WWE upset about the situation, going as far up the ladder as one could imagine.

It must be something because surely they could get another plane if it was just a mechanical issue.
Top


They're going to have to show an extended 15 minute cut of this to make time on Smackdown tonight.
Top

Vince probably gave his private jet seats to the guests like Tyson Fury and his entourage and Cain.
Top

This is more entertaining than anything WWE has done since like 2011.
Top

Notes and audio from today's call can be found below.

WWE attributed the decrease from $188.4 million a year ago to declines in live event ticket sales and merchandise offset by increase in their Media segment.

They highlighted the following quarterly highlights in their release:
https://corporate.wwe.com/news/company- ... 10-31-2019

$6.4 million operating income, down from $18.1 million in last year's Q2 due to a decline in revenue and "increases in fixed costs including the impact of certain strategic investments".
$25.4 million adjusted OBIDA (operating income before depreciation and amortization) as compared to $35.8 million the year prior.
They adjusted their full year guidance of a record $180-$190 million OBIDA, down from their $200 million OBIDA forecast from last quarter. The downturn was attributed to a TV deal in the Middle East being delayed and an increased investment in content creation.
The Network subscriber drop (9%) was in line with their Q2 prediction of 1.53 million. They predicted a further drop to 1.43 million in Q4 and a year over year decline of 10%.
They said that that through the end of September, "digital video views increased 12% on a year-over-year basis to 25.6 billion and hours consumed increased 14% to 957 million hours across digital and social platforms."
Other notes:

Vince McMahon was not on the call as he's in Saudi Arabia for Crown Jewel. George Barrios did the majority of the talking.
He acknowledged reviews for WWE2K20 were mixed.
He was asked about NXT's move from the Network to USA and the continued drive toward live rights. A question about leaving Full Sail University didn't get answered.
They expect their India TV deal to be done by end of '19 and gives no timeline for the Middle East deal.
Barrios believes 70% of total growth in years ahead will come outside the U.S. and both India and China are a big part of that growth.
They said investors couldn't be guaranteed two Saudi Arabia shows per year going forward.
Network tiers were again brought up, but no timeline was announced. They see their value prop as different than HBO Max and Disney+ so there's a not a drive to reduce the monthly cost to keep up.
They brought up "accelerated investments" in their in-ring product when asked if this year's Crown Jewel was more expensive due to Tyson Fury and Cain Velasquez. The creation of the storyline, the in-ring talent, and producing the actual content are all part of the process and all saw increases.
Asked about AEW, Barrios said there is a lot of competition for eyeballs through all media and sports entities. Their expectation is that they win.
Full audio from the call:
https://www.f4wonline.com/wwe-news/wwe- ... ase-296226


I don't know if this is true. But I get a feeling this deal is done. Even if it isn't a money issue, since going there is voluntary, who is going to be excited about going besides Brock and Taker since they get paid millions to work a few minutes. Are they going to run Brock vs Hogan in an iron man match, Flair vs Mansoor and Taker vs HHH part 10,000?

So all of that negative publicity for what, HBK having the worst match of his career, Taker and Goldberg nearly killing each other and a bunch of stuff nobody even remembers?

This is my main memory of the Saudi shows

Guy says all of the Saudi Arabia shows have been on an hour tape delay. I guess so they can be censored if need be. Like last year they were angry at a WWE Network commercial that had Carmella dancing in a sports bra.
Top

It could be 600 million Riyal but that still equates to just over $160m. Unless Vince wanted all the money upfront, but isn't the Saudi deal for ten years?.
Top

And 600m pesos is US$31m, which seems like a more plausible figure. 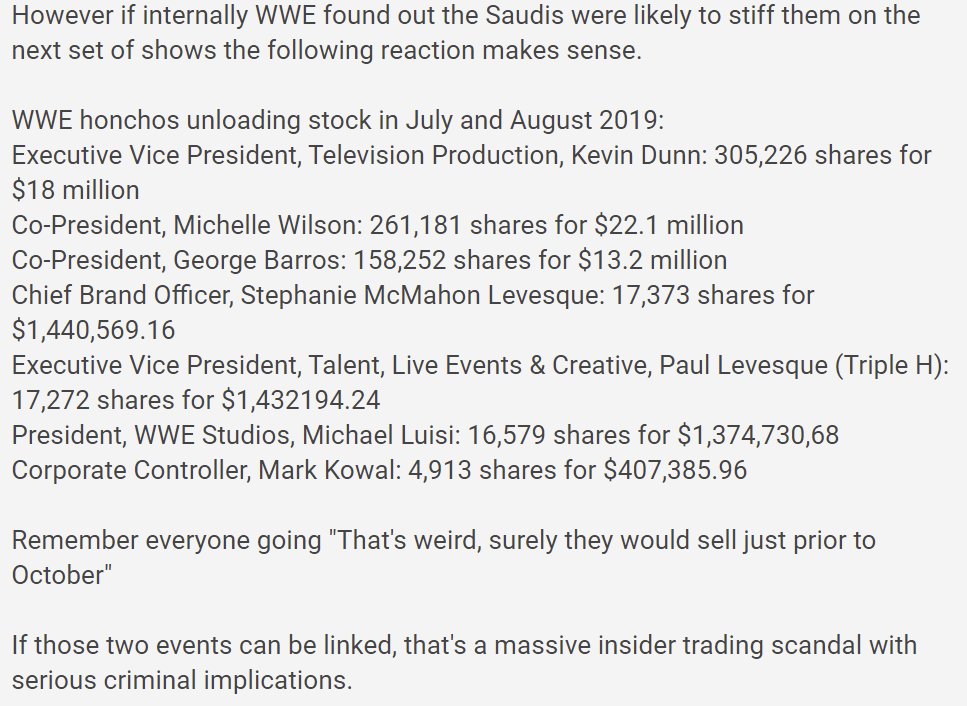