Great, your two choices are Brock who doesn't give a shit because he makes 80 gazillion dollars or Seth the kiss ass.
Top

What are WWE going to do if the wrestlers do make a stand, fire them?
Top

Buy MLW and put it on Monday and probably reach out to former talent who really need the money to come back for SmackDown. Plus Brock would probably stick around. And then they'd just wait for guys to slowly start coming back because they can't afford it. If it became a big media story or FOX freaked out they'd have to give in, though. But Rupert isn't exactly a union lover and the media don't even care when wrestlers die much less that they'd get fair contracts. "But it's fake, what do they need special conditions for?"
Top

There was a meeting at about 3 p.m. today at NYCB Live with Vince McMahon and the Raw crew. We don't have details of what transpired at this time but these are some things we've been told. The company blamed talent speculation for causing a problem, the talent was told the flight issues were all mechanical and nothing more, and Seth Rollins attempted to do a rah-rah speech while telling people to keep things like this off social media in the future.

Seth Rollins is the biggest douchebag in the business by a mile. Taker, Kane and even Cena cared about the boys when they were locker room leader. This dick doesn't care about anybody. Hell, even Hogan was better.
Top

-- Seth spoke to the talent, was said to be an awkward speech attempting to unify the locker room, lots of talk about how every wrestler is a part of a team and encouraged keeping grievances and speculations off social media. Some felt Seth was being forced into a position that doesn’t fit him and he is not comfortable with.
Top

Dave responding to Seth on WOR, "I'm surprised he even wants to defend WWE with the number they've done on his career lately."
Top


Dave has been humbled.
Top 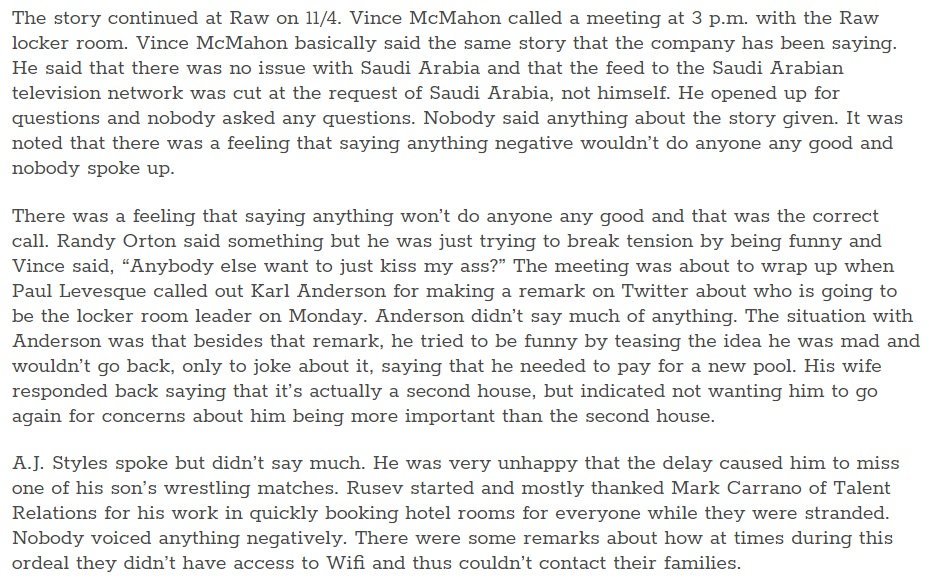 Sounds like they were all in fear of being the next guy to have to do a Cuck gimmick. They can't threaten to fire them anymore since they can just go to AEW, and doing jobs doesn't matter as much as it used to. So their fear is being the next Mike/Rusev.
Top

During the interview, Bauer said that 'The Battle Of The Billionaires' was originally supposed to feature Umaga taking on lucha legend Rey Mysterio, but that idea was nixed on the grounds that Trump would pick someone big and strong rather than the diminutive Mysterio.

"Originally, it was supposed to be, instead of Bobby Lashley, we had Rey Mysterio in there. And then, the thought was [imitating McMahon], 'well, why would Donald pick him? He'd want someone big!'" Bauer continued, "and that's why Bobby got it, and, unfortunately, Rey didn't get that big WrestleMania payday."

Bauer mentioned that Trump probably learned a lot from professional wrestling that prepared him for for his political run.

"It was interesting [to work with Trump] because the crowds were kind of hostile towards him to the point where I remember that we would have money fall from the ceiling once as a babyface move to get the crowd behind him and stuff. He never sold it if they were hostile because I think wrestling fans, it wasn't political at that time - he was just a reality [TV] guy from The Apprentice who was cross-promoting the NBC properties - and I think more or less, I think the fans were just like, 'we want to see wrestling - we don't want to have a 20-minute promo from this guy.' And I think that's what they were rejecting at the moment. But I think it kind of groomed him for political aspirations because it's the same thing as [pro] wrestling. You're just trying to take the fanbase and whip them into a frenzy and convert them into buying tickets. He's just trying to convert them into voters here. And you've got to do your catchphrases and ways to heel on your opponent." Bauer explained, "same thing there, so you look back and it's like, 'this was probably his breeding ground to do something else similar like a lot of people from wrestling get into politics whether it's here or Japan."

Jericho shared that McMahon once told 'Le Champion' that McMahon sparked up a joint during an event with Trump at a Trump property and Trump tried to make him put it out.

"I remember one time Vince told me that they were watching some concert or something at Trump New Jersey, whatever it was called. Whatever the arena was called, Trump Arena. And Vince was sitting there with Linda, Donald, and all the heads of state, and Vince lit up a joint and Trump was like, 'you can't smoke that joint in here!' And Vince goes, 'I just did!'"

Bauer told a funny story of McMahon being very upset when Trump pointed out that McMahon's jet was smaller than Trump's own.

"It's interesting to see the Vince/Donald dynamic and just seeing the measuring kind of going on." Bauer recalled, "Vince was right next to Donald's limo and Donald, his window goes down. Vince goes, 'he wants to say something - open our window.' And Trump goes to Vince, 'hey Vince, your jet looks a little smaller than mine. If you guys are going to be squished, I could definitely get a few of your guys in mine. Mine is a lot bigger, obviously.' And Vince goes, 'hahaha! No, we're fine. Have a great trip home.' The window closes and he starts turning purple. He's like, 'that son of a b---h!' He got so hot over that! It truly was a battle of the billionaires."

Paul Heyman and Vince dream of suckering him back in the ring so AJ Lee can be booked fucking Shorty G.
Top

Not surprised by this at all. Hope he makes a gazillion dollars off them.
Top