Sin Cara was released a couple of months ago, but yes, guys like Mike will probably get their wish soon. They should tell him that they'll let him go but Maria has to go too, just to see what they do. 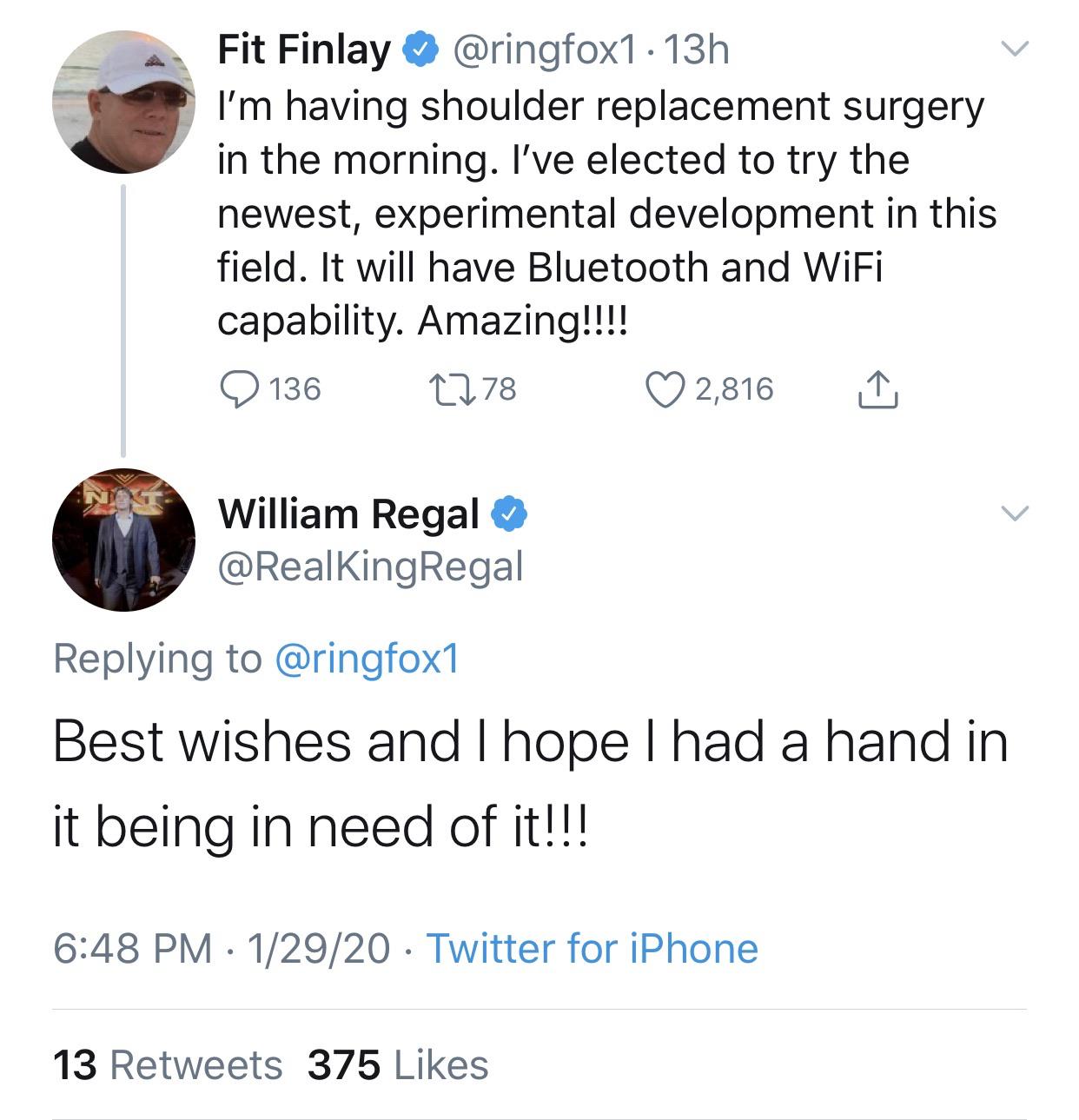 - Ronda Rousey will not be wrestling at Wrestlemania. Her discussion on Corey Graves podcast is not a hint for anything in the future.

- AJ Styles looks to be out 4 to 6 weeks with a separated shoulder. Is trying to get back in time for Wrestlemania. Claims AJ says it is no one’s fault but his own as he was trying to sell Edge’s spear and landed on his shoulder wrong.

- Dave claims that the Impeachment trial, Kobe Bryant’s final game re-airing, and real lack of interest in the Rumble itself is why the post-Rumble RAW episode did poorly with the ratings. Was still surprised Edge did not give a significant boost despite holding him as a main event and gave the angle an overrun.

- Dave also claims that while the Edge/Orton segment on RAW was the best segment of theirs in a long time...The Aldis/Scrull segment to end this week’s NWA Powerr was the best thing he saw this past week. Says Nick Aldis might be the best promo right now in the industry, even taking over people like Jericho and Cody.
Top

The best part of this is XFL starts Saturday. So Vince is going to have to clean up this mess at the same time he's doing football. The last time he did XFL WWF was a smooth sailing ship and everyone was on edge. This might finally kill him.
Top

I'd be surprised if that's the case but considering the move from the WWE Network to USA was reactionary due to AEW then yes it could be quite possible. Network subs are down too so maybe WWE will take NXT off USA anyway. Although that would equate to AEW "winning" the Wednesday night wars so I can't see that happening.
Top

Stock currently down 25% from yesterday.
Top 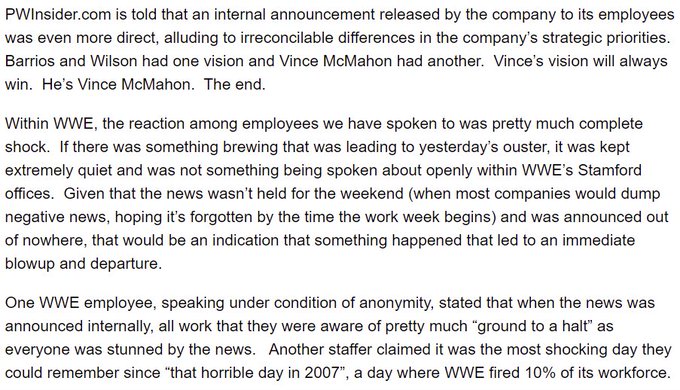 Michael Hayes must be the best ever if he's worked under Vince for 20 years and not been fired.
Top

In WWE's revisionist history, Benoit never worked for them, so that debacle never happened.
Top

World Wrestling Entertainment Inc. plunged as much as 28% on Friday, erasing more than $1 billion in market value,

Good job turning a shoot into a work, Nattie.
Top

On Thursday's investors conference call, WWE chairman Vince McMahon said the company has had advanced talks with major OTT players about changes to the WWE Network that could mean a significant revenue increase for the company.

Those changes could be content rights with marquee events like WrestleMania and the Royal Rumble or perhaps a different distribution model for the WWE Network altogether. McMahon said if a change is made, it will be announced this quarter as the talks are that far along.

When asked about the plans for the Network, McMahon said they have a lot of options. One is to remain as they are now with a free and paid tier while the other is to distribute more content to "the majors". He later clarified "majors" as OTT companies.

"There's no better time as of right now to exercise the selling of our rights," he said.

In a follow-up answer, interim CFO Frank Riddick said that while the devil is in the details, there is nothing that would stop them from selling those rights if they chose to.

McMahon was asked about whether they would consider adding advertising to the Network and he said they would be interested if they kept the model as is. If they brought on other partners, that decision would be up to them.

In the most intruiging and game-changing part of the call, Vince McMahon says that the "selling of our rights to the majors" could be a significant revenue increase for the company, adding there is very strong interest in it. At this point, there's nothing that would stop the company from selling the rights to their major shows like WrestleMania, Royal Rumble, or other entities, according to interim CFO Frank Riddick. That would indicate big changes to the Network are coming and coming soon.
McMahon said Barrios and Wilson leaving was due to differences in the vision of the execution of plans going forward, but that the company won't miss a beat.
They are confident the content deals in MENA and India will be done, but the timing and finances are what is uncertain. MENA would be a new deal while the India deal would be incremental money as they already have an existing deal. Regulatory and government matters are what have held things up.
McMahon was asked if AEW has changed anything for them. He said it hasn't as WWE's focus remains on storylines and resolutions. NXT continues to compete against them.
They were asked repeatedly about the XFL, forcing McMahon to reiterate several times that WWE and XFL are two separate entities completely.
Talent costs have increased as revenue as increased as they get a percentage, something McMahon says he's quite proud of.
Even though McMahon has a few more direct reports, he said he can handle it. "I've got broad shoulders and I can handle a lot."

Speculation seems to be these plans are further along than expected and will be announced in Q1. I'd strongly assume WrestleMania, Royal Rumble, Summerslam & Survivor Series will move to ESPN+, unless they are moving back to traditional PPV, but that's unlikely.

But when they've offered the events for the past few years as part of a $9.99 service, even advertising get the first month (or 3 months) "free" to see the Rumble, Mania etc then charging like $60/70 for PPVs again will piss off a huge proportion of their audience. Plus with subscriptions down, they need a hook to keep the current subscribers onboard.
Top

What a kick to the teeth of the WWE Universe that would be. Makes me feel even less bad for torrenting than I do.

The Network is pretty much dead if they lose the main PPVs.