I think so too. He's being too over the top about leaving. And I guess you can't blame him for staying. His in ring career is just about over so staying on to be an agent for WWE is the sure thing. And he has 3 or 4 young kids.

So I guess congratulations to Raven for his new job.
Top

I hope before boarding when they give you the option of taking the mask he said "Bitch, I've been dead since 1990. I don't give a damn about the Coronavirus."
Top

OMG. You gotta be ribbing me. WWE cannot be that dumb. Y'all see the results from that SuperShow? They aren't that dumb are they? On a glorified house show?

I hate this company.
Top

My theory: Bray gained the weight he lost back. Vince said "Fuck this lardo if he won't stay on the gas, pal!" and now his push is over.
Top

It's depressing how much sense this makes.
Top

I was thinking it when I saw Smackdown and Bray was really filling out his sweater (and not in the way that Ric Flair likes) and this kind of confirms it. That and Goldberg will be easier to sell to ESPN+ than Vince trying to explain Bray/Fiend to someone who has no clue what's going on in WWE.
Top

It's time to give the Hulkster one last run with the belt, Vince! 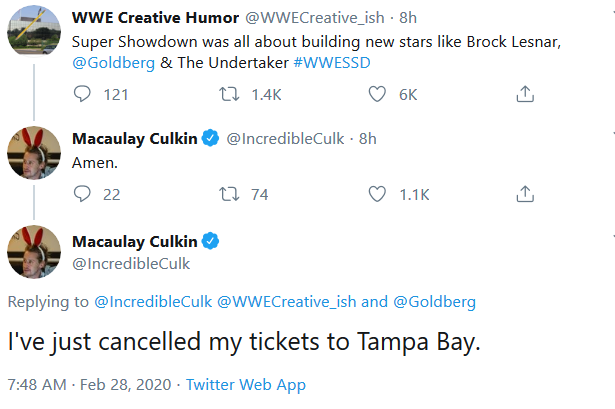 I'll spoiler it just in case

I'm guessing they are going with Goldberg vs Cena now at WrestleMania. It's one match which might get a fairly good buyrate if it's on ESPN+. But they really need to make the PPVs a big deal again especially Mania. They can't expect fans to go from paying 9.99 to 59.99 (or more) for low quality shows.
Top

Since day one of Smackdown on FOX, the main storyline was The Fiend destroys everyone, no exceptions, and Roman Reigns is kept away from him in a long feud with King Corbin. This would lead to their first meeting at WrestleMania, the monster heel, even if he is cheered, against the badass face. It’s the formula that almost always works.

Except the change in the card shows in Vince McMahon’s eyes, it didn’t. It’s quite an admission, that a WCW creation of 1998, now, 22 years later, can walk off the couch and be a bigger star than the guy who has been pushed as untouchable weekly on television. But that admission is true. For an endless number of reasons, WWE has trouble making stars, even when they have them. Even with the bigger audience and platform, the WWE method of making stars can’t match 22 year old nostalgia. It’s not the first time. WCW couldn’t make stars after 1999 who could get over like Hulk Hogan, Sting, or Ric Flair, who were all past their primes. But yet, those same people who couldn’t be stars, ended up doing well years later. Today, people who weren’t seen as stars in WWE who could carry the brand, Cody, Chris Jericho and Jon Moxley, are carrying the rival brand and getting reactions far bigger than anyone in WWE. One of the great lessons of the value of WWE television was many years ago from Jericho. During one of his comebacks, he had the idea that he wanted to work a house show schedule, but refused to work any television. At almost every house show, the guy with no television was over more than the main eventers on televison weekly. Granted, the same could be said for Bruno Sammartino after 1977 and until the end of his career, that he was more over at the arenas but was never on television, but, he was Bruno Sammartino, not Chris Jericho.

Indeed, the very idea of Goldberg was to be the reincarnation of Sammartino from late 1977 until he retired in late 1980. That’s why him being added to the list of babyfaces destroyed by The Fiend, which was absolutely the plan, seemed foolish.

Goldberg beat The Fiend, breaking the mandible claw twice and pinning him with a jackhammer that really wasn’t one, in 2:57 on a night in Saudi Arabia where the theme seemed to be current guys squashed by part-time legends in seconds, a largely heatless crowd, and lackluster matches.

So Seth was terrified of The Fiend and Goldberg just destroys him in under 3 minutes. Logically they should have had Funhouse Bray lose instead and you keep Fiend Bray protected. Brock/Ricochet was just a squash match and they could have just done it on Raw. They could have tried to make it a contest and they could have made Ricochet if he put up a fight against Lesnar. The booking is what they made fun of WCW for with pushing the older established names. What's worse now though is there is no star coming through. Isn't there 6 or 7 more years of the Saudi Arabia shows too so again the emphasis will be on the older stars.
Top

This will be the 5th Wrestlemania that will have a main event about making Roman Reigns the top star.

Nobody else got that many chances from Vince. He once took the belt off of RIC FLAIR because ratings were slightly down.
Top

Will Reigns get booed if he beats Goldberg or will the reaction be quiet due to nobody really caring anymore?
Top

They might be anti Goldberg if they're still mad about Bray.
Top

It could depend when the match is on. If Cena beats Bray before Goldberg/Reigns, they might have transferred that anger to Cena.
Top

Cena/Fiend will have more heat than Goldberg/Reigns. That's a sad state of affairs right there.
Top

It really depends on the mood of the audience. If the other results piss them off then they'll boo regardless and will chant AEW etc. But unlike AEW, WWE or more specifically Vince, they don't listen to their fan base. By now WWE should have at least one new star coming through but because they aren't instantly getting over Vince switches gears and goes back to what's tried and true. Bryan and co talk about it here

In theory, Roman should go over Goldberg and The Fiend over Cena. Because 10-15 years down the line they can't really bring back a 63 or 68 Bill Goldberg to main event a PPV. I mean you could argue well Tim Storm in NWA and Chris Jericho in AEW. But with both those promotions they have potential stars who will be given time to grow and become stars. AEW especially with Sammy, Darby, Jungle Boy etc and Ricky Starks in the NWA as just one example.

WWE has to do something now to change things up and if they do start charging 60 bucks + for a PPV then they will lose whatever goodwill they have left. The TV contracts they have should be sufficient enough to keep them in business for decades though so if PPV/Network subs do go down it won't hit them too bad financially. But if ratings drop drastically then once the TV deals are up for renewal that will be a very telling period.

With no new stars coming through 10-15 years down the line I think if AEW really start hitting their stride we might see a huge shift in terms of popularity. WWE can't continue to keep pissing fans off and expecting them to stay loyal. AEW and other promotions could easily step up to a higher level and pick up a ton of disenfranchised fans who will get rewarded for supporting a wrestling show that is all about giving the fans what they want.

As I've said before, this isn't the rosters fault. It's the cruddy storylines and booking. WWE could have in theory among the best wrestling shows right now with the talent level they have. But because of the micromanaging its the same old across the board. For me, NXT is no different to the main roster shows right now. AEW are beating them in the ratings because it's a superior show across the board.
Top

they can't really bring back a 63 or 68 Bill Goldberg to main event a PPV.