Ryback is on the outs with WWE right now so I won't be surprised if he gets released or agrees on a release. Rumor going round social media is one of the releases today the fans won't like too much so if that's true that opens up a big can of worms.
Top

Looks like there will be a bunch of fresh shoots out later in the year.
Top

I was thinking Zack might be future endeavoured but his careers on a upswing right now so it wouldn't be the smartest of decisions on WWEs part to release him now considering he recently had his big WrestleMania moment.

Not a surprise. It will be interesting to see where he goes and if he still gets the same level of cheers.
Top

New Japan's a possibility, as is TNA but they are operating on a shoestring right now so they don't have Spike or Panda to fund talent acquistions now. Really if WWE have interest keeping these guys around they should just send them down to NXT on their base salary instead of hiring them back at OTT salaries like they did with Del Rio. Because if Sandow goes to Japan and he's a big hit over there they'll bring him back no doubt on a higher salary. What WWE needs is to go back to the territory type system and put these guys in different locales and interchange them like the NWA did back in the day. It keeps everyone fresh then and then PPV events would be major deals again and Raw could be the top draws of say the Mid South area vs the New York area. Plus in almost every area could be a WWE branded Show so that not only gets the brand bigger it also opens up the door possibly for an international WWE brand say one in the UK with Barrett, Neville,Paige et AL and a WWE Japan with Nak, Kenta et AL. I mean right now you have a situation where someone can easily get lost in the shuffle so creative and I'll use that term loosely have nothing for them. Yet in their territory theyd be a big name. I guess the point being the WWE is an umbrella brand name ala the NFL, NBA etc and then territories could be representative of the NFL teams for example and it also creates competition so it would actually be a win win as right now the product definitely needs freshening up and a different direction since with no competition they are just on auto pilot and there will never be another boom period without real competition.
Top

If TNA gets bought and the new investors want to do house shows, they will need some extra guys, so some ex-WWE midcarders could fit in nicely.
Top

During tonight's episode of Raw, a local advertisement in Hawaii reportedly advertised John Cena vs. Shinsuke Nakamura and Brock Lesnar vs. Kevin Owens for the June 29 event in Honolulu. The event has already sold out.

-- Steve Lombardi, known as the Brooklyn Brawler, has reportedly been released by WWE. According to a report by PWInsider.com, Lombardi was released last Friday, but WWE has yet to publicly announce it.

Lombardi first signed with WWE in 1983 and worked the majority of his career as an enhancement talent. He transitioned to a behind-the-scenes role as an agent in the 1990's. Lombardi would oversee and produce promos with the WWE roster.

-- The Monday, May 9, 2016 edition of WWE RAW, which featured Chris Jericho vs. Big Cass as the advertised main event, drew 3.238 million viewers. This was down 6 percent from last week's show, which drew 3.432 million viewers for the post-Payback episode of the show.

The hourly viewership breakdown for this week's show is as follows:

According to the report, Leppan and his wife were involved in an argument about the state of their marriage when he grabbed her face with his hands and pulled her close to his face as he screamed at her. His wife dialed 911 from their home phone but Leppan took the phone from her to prevent her from reporting the incident. According to the arresting officers, Leppan admitted he took the phone from his wife.

Leppan grabbing the phone from his wife resulted in the tampering with a witness charge, which is a felony in the state of Florida.

The domestic battery charge is a misdemeanor, and Rose is still in jail with no bond. 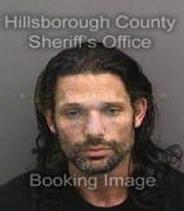 That's the face of a man who knows he's going to be released within the next hour.
Top

It’s been 15 years since Vince McMahon and the WWE decided to start up their own professional football league. The XFL only lasted one season, but the memories of that failed experiment live on. Apparently, ESPN is developing a 30 For 30 documentary about the league.

ESPN’s Jonathan Coachman appeared on the latest episode of Jim Ross’ podcast, The Ross Report, and revealed the news. You can hear Coachman tell Ross about it at the 34:45 mark of the show.

“They’re going to be doing a 30 For 30 on the XFL,” Coachman said. “I recently sat down for an in-depth interview for this 30 For 30 at ESPN and got to relive some of those moments, some of those nights that we had.” Ross was also a broadcaster on the XFL games, which were broadcast on NBC, TNN (now Spike TV) and UPN (now The CW).

“The XFL was something that we will always have,” Coachman continued, “and nobody will understand what that experience was like in our foray into football on the weekends, and still doing Raw and Smackdown on Mondays and Tuesdays.”

The league debuted on Feb. 3, 2001, a week after the Super Bowl. Vince McMahon stood at midfield and introduced the inaugural game between the New York/New Jersey Hitmen and the Las Vegas Outlaws, which began not with a coin toss and kickoff, but two players racing for the ball at the 50-yard line. Whoever came up with the ball gained the first possession for his team.

According to a police report, Leppan was taken into custody and booked on alleged charges of tampering with a witness, a felony, and battery domestic violence, a misdemeanor. He is currently being held without bond.

WWE has zero tolerance for matters involving domestic violence, and per our policy, Raymond Leppan has been suspended indefinitely following his arrest.

-- PWInsider.com is reporting Damien Sandow’s WWE release was not due to anything Sandow specifically did, but the company felt it was time to change the roster up a bit.

Damien Sandow’s release was a surprise to many, but he is already taking independent bookings. Sandow will appear at live events in New York, New Jersey and Indiana among others, including an appearance with Jim Ross at Oklamania this July.

Christian was released from his contract but will continue to do the show with Edge.
Top

Alberto has released in Paige.

You know, that relationship is so odd on the surface I'll bet it works out. Because if you asked me to pick the weirdest possible wrestlers that could be in a relationship, I might have come up with that.
Top

Yea you'd think Paige's type is more a Corey Graves but that relationship with Del Rio might work out. I guess he's broke up with his wife or seperated as he was married.

Not sure how accurate this news is, but apparently there is a documentary on Koko B Ware with Morris Day narrating it which is reportedly in Princes vault. They also found a project called Bockwinkle with Bob Mould although Bob said he never spoke with Prince so that could just be a rumored collaboration. Both sound interesting if they are true. I'm thinking what year the Koko doc could have been made, he had The Bird as his theme and I imagine Prince and or WB must have OKed it. Koko also seems an interesting choice for a documentary too, you think one about Nick Bockwinkle or someone else affiliated with the AWA would have been chosen instead as Koko wasn't a huge star and didn't work th AWA territory to my knowledge. But who knows, maybe Prince and or Morris was a WWF fan and liked the Birdman.
Top

I'm pretty sure that list of what was in Prince's vault was from a satirical article, so the Koko doco isn't legit.
Top

Yea I heard that too, although from what I've ascertained some of the items are legit and some were made up, these I believe are legit:

The Rebels — A collection of rock songs done with members of The Time in 1979. (not The Time, it's with Dez and members of the Revolution, I've heard these songs so I can confirm this is for real)

The Second Coming — Documentary film and live album from 1982. (there's still of this available so this is real too)

Prince and the Revolution: Dream Factory — Double LP project from 1986.

These four are legit too and have circulated among collectors for years.

This is legit too, it's been available for a long time as a bootleg

This was released to NPG Music Club members at concerts IIRC

These also are real:

Prince and the Revolution: Roadhouse Garden

Támar: Milk & Honey (Tamar was an early member of the group became Destinys Child) I also can confirm its legit as I've heard it

These seem very likely too:

High — Unreleased album from 2000 with contributions from Angie Stone. (they dueted on U Make My Sun Shine so I imagine it's legit too)

Unity 4 the People - the title sounds more James Brown-esque so maybe this one is made up.