Tony is going back to prime time television~!

MLW announced via Sports Illustrated today that their new one-hour weekly series will debut on beIN Sports USA at 8 p.m. Eastern time on Friday, April 20th, with a replay set to air at 11 p.m. It was noted that MLW is getting a rights fee from beIN Sports as part of the deal.

“We’ve been in talks since the fall, and they were very impressed with our product,” MLW CEO Court Bauer told Sports Illustrated. “We offer a different presentation because we identify ourselves as a combat sport, but we have a lot more creative freedom than every other combat sport to give the most high-octane presentation.”

MLW, which also has a podcast network, returned as a wrestling promotion for the first time in over 13 years with an event called "One Shot" at GILT Nightclub in Orlando last October. They've run monthly shows at the venue since December and will be crowning a World Heavyweight Champion when Matt Riddle faces Shane Strickland on April 12th.

The TV episodes will be taped monthly and then edited for the weekly show.

Bauer said that MLW has worked out an agreement with Lucha Underground and AAA for Pentagon Jr. and Rey Fenix to be regulars on the TV series. Tony Schiavone and Rich Bocchini (formerly known as Rich Brennan in NXT) will be the announcers for it.

MLW will be part of a "Friday Night Fury" fight block on beIN Sports. Much of the channel's programming is focused on soccer, with them having the rights to the top leagues in Spain, Italy, and France in the United States.

lol they got a paid TV deal on their first attempt and TNA hasn't had one in the US since Spike.

And we know 4/20 is already a special day for most of the people involved with the MLW Network.
Top

Its the greatest night in the history of our sport!
Top

It would be cool if they could kind of be like PWG with a TV deal, where all of the major indie workers show up for all star shows. Obviously unlike PWG they can't use ROH, Lucha Underground or New Japan wrestlers (PWG is only allowed to put shows out on DVD only on a two month delay due to those TV deals) but they could still have stacked shows. Matt Riddle as their champion is promising since he's untapped talent.
Top

Meltzer: Court Bauer's Major League Wrestling, which has gotten a hardcore buzz for presenting top level indie matches in Orlando, will be on BeinSports starting on 4/20 in a Friday night 8 p.m. time slot, which means they'll be going head-to-head with New Japan. They will also have an 11 p.m. replay. Court Bauer said that they are looking at presenting their product more like combat sports, which would be similar to New Japan. They will be doing a weekly one hour television show of matches taped at Gilt Nightclub. The show will be called "Major League Wrestling: Fusion." BeinMedia has TV channels in the U.S., France, Canada, the Middle East, Northern Africa, Turkey, Australia, New Zealand, Spain, Hong Kong, Indonesia, The Philippines, and many others. The show will definitely air on the U.S. channel which is in 22,135,000. It airs on DirecTV 620 in English and 467 in Spanish and on Dish 392, 9611 and 871. It can be picked up from most major cable companies but on specialized packages rather than the standard package.

MLW has signed a number of wrestlers to contracts, although the only name they've announced is Michael Jacob Freidman. According to one person with knowledge of the deals, one of the issues is that the contracts prevent the talent during terms of the agreement to work for WWE. The idea is they have a year's worth of dates for TV tapings and the contracts make sure that, unless the talent is on a tour of Japan or something like that, that they are available during that period so they can do their storylines. They would be able to work anywhere else as long as they are available for the MLW TV tapings and would be able to work television for other companies. MLW is being paid for the show. Bauer and MSL will be booking and others involved backstage are former WWE creative team members Alex Greenfield and Robert Karpele, as well as 80s WWE executive producer Nelson Sweglar, and a list of agents that includes MVP, Bruce Prichard, Jimmy Havoc and Low Ki.

They have a relationship with WWE since Mark Henry will be appearing at WaleMania this year, and have a relationship with Lucha Underground (Bauer has worked with Dorian Roldan on-and-off for years) since they will have Rey Fenix vs. Pentagon Jr., using the Pentagon name instead of Penta 0M, on the 4/12 show, and will be regulars going forward. Tony Schiavone and Rich Bocchini will be the announcers and they will be part of a Friday night sports block. Bein focuses on a lot of international sports, with soccer from Spain, France and Italy as key programming. The 4/12 taping has the finals of its world title tournament with Matt Riddle vs. Shane Strickland, Fenix vs. Pentagon, Matt Sydal vs. Low Ki, Sami Callihan & Joey Janela vs. Jimmy Havoc & Darby Allin in a bogus adventure match (basically a mystery style of match). They would allow the few guys they are putting under contract to work anywhere else but WWE based on what we were told, I was told they would be happy if they worked for Impact or New Japan. ROH would likely not use anyone that is under contract to another U.S. promotion, but Impact is more open to do so.
Top

4/12 taping has the finals of its world title tournament with Matt Riddle vs. Shane Strickland, Fenix vs. Pentagon, Matt Sydal vs. Low Ki, Sami Callihan & Joey Janela vs. Jimmy Havoc & Darby Allin in a bogus adventure match (basically a mystery style of match).

Damn, that sounds like the best TV matches anybody has had in a while. I'm of fan of all of those guys. And MJF is progressing to being a good heel.
Top 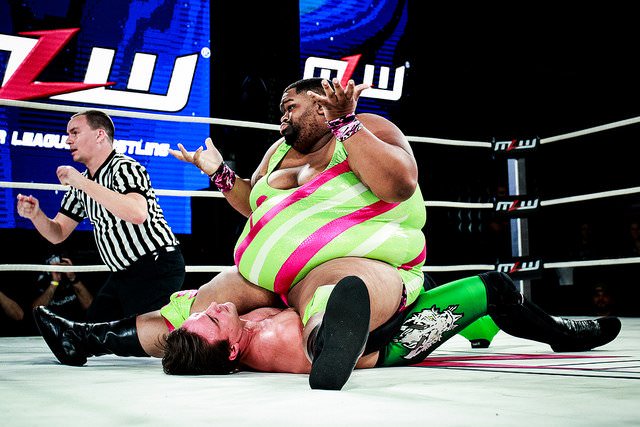 I recorded but haven't watched it yet. I will in a little bit.
Top

MLW is putting the shows on youtube for those outside of the US. It has really good wrestling and TONY~! calling it, so start watching now.

Bring Tony then bring back Nitro, Vince. You would get $600m a year for that.
Top

And Mongo with the great great grandson of Pepe.
Top

They could have crushed Hornswoggle's head.
Top

He has Melanie's eyebrows and Brian's 1992 hair. And the top half of Harry Smith's face looks like Diana and the bottom looks like Davey.

And why did Teddy say fuck but get shit bleeped? That censor must have been distracted.
Top

Pillman Jr has a lovely mullet.

That was great, they should bring them in to Impact to feud with oVe, LAX, OGz etc. Brian Jr doing his pops loose cannon gimmick is both

at the same time cause Brian Sr should have been a big star in the Attitude Era. Imagine putting him up against Vince instead or have him as Vinces hired gun to bring down Stone Cold, either would have been must see TV.
Top