Who is he? How would he know?

I think if it were true Bix would be all over the story because he doesn't like Jericho and that type of story is what he's known for reporting on for Deadspin.

ETA found out this guy used to work for Ian Rotten's promotion years ago. Sure, let's talk about gross people in wrestling, guy.
Top

It is probably bullshit. I'm surprised Bix hasn't said something about it, even if it is just to say it's crap.
Top

It's possible since we don't know. But given the image AEW is trying to pull of as the anti-scumbag promotion, to this early be paying off sexual harassment suits is very out of place. Even if it's Jericho and he's their Hogan now so firing him would have ruined a lot, if something happened and came out it doesn't just affect AEW, it affects everything Shad Khan owns. So I don't see the risk being worth the reward. Vince is in a situation where he can be a piece of shit because he's the wrasslin carny guy so of course he's shady and the press doesn't care. But Khan is a guy with a ton to lose.
Top

Apparently Kylie did sign a non disclosure agreement as part of her release so it's very likely we will not know the real truth. The Jericho story has been rumoured for a few months but it wasn't ever backed up by any credible source(s). If it is true then really it needs publicity because that type of behaviour is widely inappropriate and AEW have to act upon it. If it meant firing him, so be it. You don't condone anything like that, especially when you're pushing yourselves as being all inclusive.

That Bix, Dave, Bryan and Ryan Satin haven't commented on this has got some saying that they've been told to cover it up etc. But surely if it was serious to the point of Kylie leaving then criminal charges would have been brought and be made a police matter. Because you need zero tolerance against any type of sexual harassment and depending on the severity is when you have to act. They shouldn't brush this under the carpet if there's any credence of truth to the story. It makes you wonder how often this type of behaviour goes on and it needs stamping out.

It might be this guy just stirring up trouble and if so then Chris Jerichos lawyer needs to talk to this guy and get him to retract the story and apologise. It gives him a bad rep and makes AEW look very bad by association for standing by him and not Kylie.
Top

That Bix, Dave, Bryan and Ryan Satin haven't commented on this has got some saying that they've been told to cover it up etc.

If she signed a NDA there's nothing to report but rumors. And if it turned out the original story was true about it being a mental health issue that's violating her privacy.


But surely if it was serious to the point of Kylie leaving then criminal charges would have been brought and be made a police matter.

It isn't a crime to ask someone for sex unless you threaten them.
Top

The Cody and Jericho segment is awesome.
Top

Mox and Pac was also very good. Solid show besides Dark Order killing the crowd for a little bit.
Top

Tony is having fun. He's completely different than Nitro Tony. I think Tony and Corny are the two best announcers in US wrestling right now. Which is crazy because they started in the business before I was born. But they both love the product they call (Cornette is enjoying himself more than in MLW.) And after years of miserable WWE announcers and Mike Tenay having to waste his talent calling awful TNA, it's refreshing to hear Tony and Cornette just enjoying their jobs.
Top 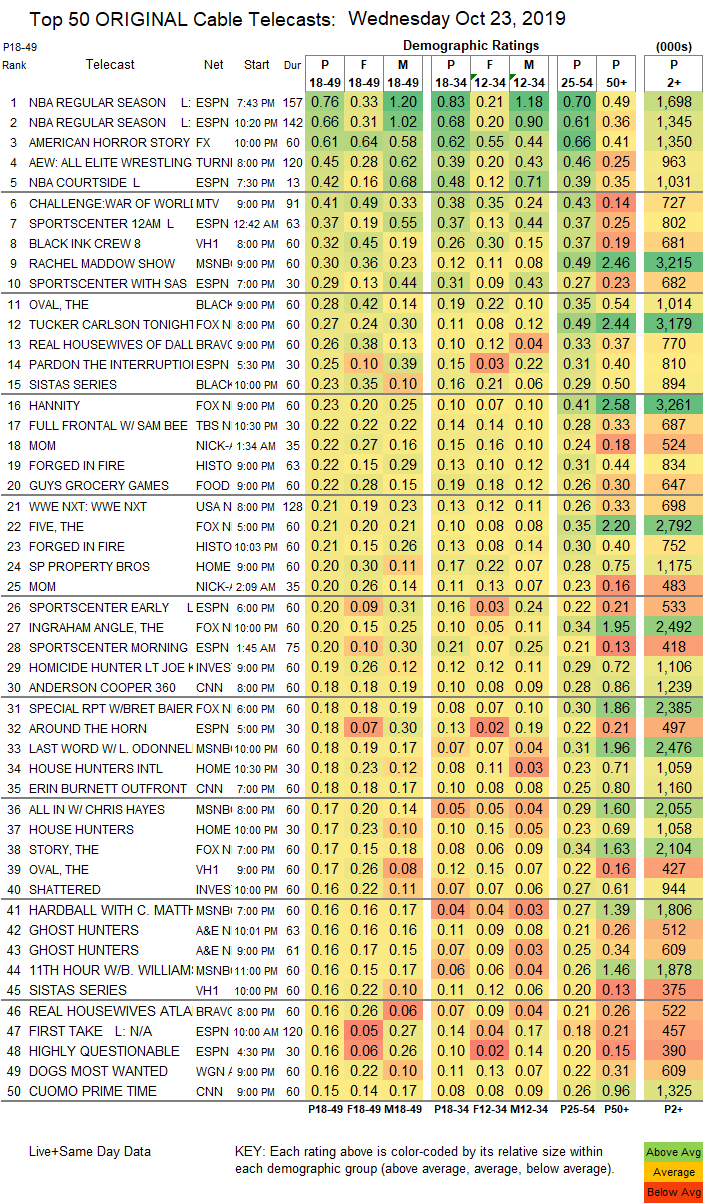 AEW still beating NXT, but that's half a million drop in viewers since the premiere episode. From watching the Monday Night Wars again it was a non wrestling segment which garnered the most viewers with "This is your life" with Rocky and Mick. Which says for mainstream/non fans it's just the characters themselves which brought the viewers in.

AEW really needs to build up the character development more so the non fans can get invested in them. The wrestling itself has been very good but there's actually too much of it I think which is why any new fans tuning in might have tuned out. They should break it up more like NWA Powerrr does where already they've established Tim Storm as their #1 babyface in one episode.

I get AEWs hardcore fan base want a wrestling centric product but the goal is to expand the audience as much as possible. If they drop viewers still but say January they'll be down to like 750,000/800,000 and TNT could be like that's put them on B/R instead. So they need a hot angle to bring the fans in.

I'd have brought in Bischoff since he's just come off being let go by WWE and you could have had him cut a promo on Vince etc and say he wants to go to war again but this time he's going to pull out all the stops to win. Then put him with the Inner Circle and if any wrestlers become available over the coming months have them turn up on Dynamite. It's very Nitro-esque but they need something to bump the ratings back up.
Top

I'm assuming Bischoff probably took some kind of pay out to not show up on AEW for a while like Heyman did to stay away from TNA after he was fired after December To Dismember.

They shouldn't just grab everybody because TNA did that and it killed their momentum. You want to be seen as different and not a second class WWE. If a person makes sense like Moxley definitely bring them in. But they don't need to be bringing in Enzo and Cass, Ryback and Mike Kanellis just to try to pretend they're Nitro. TNA did that and it made guys like Joe, Abyss and AJ look second rate.

As far as ratings they've been up against the baseball playoffs and now the World Series so I wouldn't panic yet. Plus they're still doing twice the rating that was predicted by TNT when the show was set to debut.
Top

Good points. AEW needs to analyse what has caused the drop off so it doesn't happen any further. They are exceeding expectations which is good and if TNT don't have a problem then that's not much concern for the fan base. Maybe the audience isnt as strong as was anticipated. I thought because the first show was solid that viewership would increase but it dropped by like 300,000+ viewers or so for week 2. Ideally they need to figure out what works and on a grander scale because say they hit on a hot angle but the diehards don't like it but it brings them an extra half million/million viewers do they risk losing their core fanbase for a bump in ratings?. Or if they stick with their current show do the fans get burnt out since we are seeing PPV quality cards each week so far. Tony wants AEW to be sport centric so if they go the WWE route and try to pattern their show after theirs it will be counter productive and they'll likely lose their loyal fans since it wouldnt have much differentiation between them and WWE. As long as TNTs cool with the ratings then they can continue with what they are doing. With the quality of their shows they should be doing around 1.2m or more I think because every show so far has flew by and it's not a chore to sit through like WWE is.
Top

The rating for week one was high because of curiosity. Who knows why they didn't stick around. But the MLB Post Season is responsible for a chunk of it. Same for NXT as well.

I think the show is fine. The only thing this month I disliked was Dark Order. So if those 300,000 people saw the first Dynamite and didn't like it then AEW isn't for them.

The build wasn't going to happen overnight. Remember Nitro was built off of years of WCW Saturday Night gaining a loyal WCW fanbase and AEW is starting from scratch. It was much easier to tell an existing fanbase to watch a show 2 days later than do what AEW is doing.
Top

Thats true. They just need to consistently keep the audience they do have and try on build on it. Say they average 900,000 viewers til the end of the year it gives them a clearer indication of their audience and what is clicking and what's not, then cater to the audience accordingly.

The talent is there, it's just utilising affectively. There's guys like Orange Cassidy & Luchasarus who can build a cult following. MJF should be front and centre but they are doing the slow burn feud with Cody which makes sense. But when you have a talker like him on the roster you should focus on him since I think he can appeal to the casuals and even outside the wrestling realm. TNT seem supportive and are doing the cross promotional stuff with Rick & Morty so have MJF on a NBA broadcast and for him to do his whole thing with Charles & Shaq. But really they need promotion outside of the sports realm which is how WWE caught on in the 80s and again in the 90s with Iron Mike. But WWE are trying it now with Tyson Fury and it's not catching on. So maybe AEW sticking to what they know and follow more so the ECW model with a cult following which gradually become a bigger deal is better. Since although they pattern themselves after WCW, AEW is more rooted in the ECW ethos with Chris playing the Terry Funk role.
Top

Barkley and MJF would be the greatest moment in television history. And he and Shaq are both big wrestling fans so they'd play along.
Top

Yea that would be that great.

Very good show again. The Cody/Jericho brawl was real fun, cool to see DDP again too. The draw at the end pissed the fans off somewhat so they don't want to do that too often but it made sense. I think the show ended with Hangman coming out anyway (An extended Dynamite was shown yesterday I believe) so at least they sent the fans home happy. JR seemed quite jaded and grumpy during some points and if that continues I'd maybe just have him announce matches for the wrestlers he likes so he sounds more enthusiastic. Or have him do interviews like he did with Cody and Shawn Spears so the viewers get to know more about the wrestlers. Because I found him quite combative with Excalibur at some points and with Tony. Maybe he was just pissed off about something. Shame Corny has beef with a lot of the AEW guys as I think him and Tony would have been really good on announcing since they both sound enthusiastic and as a viewer that gets you more involved. Excalibur has done a very good job so far, he was definitely the right choice as an announcer. Overall I liked the Kenny/Joey, Lucha Bros/Private Party matches the best. Plus the Cody, Dustin, DDP and MJF pull apart brawl with Inner Circle. The rest was fine too. Also liked the Bucks/Best Friends.
Top