-- On Monday, Ring Of Honor announced a new multi-year partnership with The Fight Network out of Canada.

Per the new agreement, The Fight Network will air the weekly ROH television shows beginning on April 26th.

Below is the official press release ROH issued on Monday:

New episodes of Ring of Honor Wrestling on Fight Network will premiere Tuesdays at 11 p.m. ET. Check listings for encore airings throughout the week.

“Ring of Honor has long been touted as a worldwide leader in professional wrestling and we’re thrilled with the opportunity to finally bring a weekly series to Canadian fans,” said Chad Midgley, VP of Fight Network. “Over the past decade, ROH has staged plenty of five-star matches that will go down in history as some of the best. Its focus on in-ring quality, attention to detail and talent development is outstanding, making it a perfect fit for our stacked professional wrestling block on Tuesday nights.”

“Ring of Honor is honored and excited to bring our product to the Fight Network,” said Joe Koff, Chief Operating Officer of Ring of Honor Wrestling. “For many years, we’ve produced live shows for our Canadian fans and now we are thrilled to provide the ability to watch Ring of Honor wrestling on their television, in addition to online at rohwrestling.com and on our YouTube channel.”

-- Moose’s contract with Ring of Honor is set to expire in the next few weeks, according to the Wrestling Observer Newsletter. There was interest within WWE in 2015 in bringing him in once his contract expired, but he ultimately opted to re-sign with ROH last May.

The former NFL lineman has drastically improved since beginning his professional wrestling career, and is capable of extremely impressive feats of agility, coupled with the obvious strength and size factor for a 300-pound man billed at 6’5″. It will be interesting to see where the 32-year-old star lands, as ROH will not want to lose him and WWE could definitely use new potential in their developmental program as they shift towards splitting the Raw and Smackdown rosters later this year.

For what it’s worth, long-time Ring of Honor veteran Roderick Strong’s contract is also coming due in the next several weeks as well. 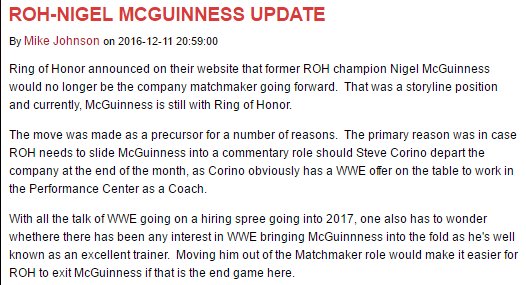 Kevin Kelly, who has served as the voice of Ring of Honor since 2010, departed the company this week, PWInsider.com has confirmed.

Kelly had taken a full-time job with the company in their office last year, juggling his announcing duties with logistical duties that were meant to ease the pressures on ROH booker Hunter Johnston. At the time Kelly took the full time job, he had told PWInsider.com that he was there to work as a liaison between the wrestlers and the office to insure better communications and to help spearhead projects that ROH needed to work on, such as a streaming service and an updated website.

We are told that Kelly gave notice and departed the company. He completed his duties for the office this weekend is not currently scheduled for any additional announcing for the company at this time. He was not scheduled for this weekend's ROH events and is scheduled to travel to Japan to call the 2/5 New Japan Pro Wrestling event in Sapporo, so it would appear his exit from ROH would have no bearing on his NJPW duties. New Japan has expanded their English language commentary for their New Japan World streaming service.

Kelly first broke into the business announcing for Eddie Mansfield's IWF in Florida. He signed with WWE (then-WWF) and was with the company from 1993 to 2003. He also hosted the Lucha Libre USA series on MTV2, which ran for two seasons. He was first brought into ROH by Jim Cornette, who he had worked with during their respective WWF runs.

Kelly would be the third announcer to depart ROH in recent months as Steve Corino signed with WWE to work as a trainer after his ROH contract expired on 12/31 while Nigel McGuinness, who would assist regularly with announcing and worked as the company's on-screen General Manager, left to sign with WWE as an announcer and will start next week as the color commentator on WWE NXT. McGuinness was not under contract.

It is possible (and probably likely) that Ian Riccaboni, who handles announcing for the ROH Women of Honor brand, could step in as Kelly's replacement but PWInsider.com has not confirmed that is ROH's plan.

The thing that surprises me is that I heard for years Sinclair made ROH profitable and loved it because it was a cheap program that got good ratings for them. So it wasn't a money pit like TNA.

Also kind of amusing the top guy right now is a guy they turned down for being too old and the second top guy is a guy they just released for not being worth the money and he's doing the exact gimmick Vince didn't think could get over in WWE.
Top

Joe Koff says ROH wasn't negotiating to sell to WWE, they were just in talks to license Kevin Steen matches for a Kevin Owens DVD and Ryan Satin blew it up out of proportion.
Top

ROH might finally be getting national television. Sinclair is going to buy the company that owns WGN (which used to show Superstars in the 2000s and TNA negotiated with after losing Spike) so they may put it on there.
Top

ROH announced they're launching a streaming service early next year. It always surprised me some indies much smaller than them had a service but they didn't.
Top

Catching up on ROH, Dalton Castle doesn't work as a babyface. Like Goldust when he turned in 1997 the act just isn't the same. So it was a mistake for Cody to lose the title to him.
Top

Now the ROH angle to the NJPW angle is that Kenny might not be gay (although he's been said to be gay IRL.) So now they may have Ibushi come in to prove Kenny really is gay.

I think Vince Russo might be involved in this one.
Top

Definitely reminiscent of Vinny Ru bro. Its rumored Kenny could be gay, but that's his personal business and I have no problem with that at all. He's one of the top talents in the biz and if he's gay that changes nothing. Maybe he won't come out publicly because his popularity might take a hit or because he keeps his relationships private.
Top

I'm not knocking Kenny for being gay, I'm just saying that's why he's comfortable with the angle when most wrestlers wouldn't be. It goes further than stuff like Chuck and Billy and 1995 Goldust. It's not a "we act gay just to throw off opponents" gimmick, they're just a gay couple. And in Japan there's no homophobic chants, the fans love it.

And the enormity of it is pretty interesting since they made him gay in the middle of a monster push to be one of the top stars in the company. Imagine if WWE made Roman Reigns gay.
Top
Post Reply
166 posts