Hey, I could get behind a ROH/AEW teamup.
Top

For the first time since 2009, KENTA is returning to Ring of Honor.

KENTA will be in action at Supercard of Honor XIV in Lakeland, Florida on Saturday, April 4. He's the third Bullet Club member and fourth NJPW wrestler announced for the show. It will also feature Jay White, El Phantasmo, and Will Ospreay.

KENTA will challenge Tetsuya Naito for both the IWGP Heavyweight and Intercontinental titles in the main event of NJPW's the New Beginning in Osaka on Sunday, February 9.

The Bullet Club is also holding their Bullet Club Beach Party at Whiskey Joe’s in Tampa earlier in the day on April 4.

Seems Showcase TV which airs FightNetwork UK programming have stopped airing ROH. I'm assuming this is because ROH is on Charge! in the US now instead of AXS.
Top

Flip has signed a new contract with ROH


Flip Gordon has signed a new contract to remain with Ring of Honor.

On the debut episode of ROH Week By Week on the promotion's YouTube channel today, it was announced that Gordon has re-signed with ROH. Gordon tweeted that it's a multi-year deal: "I’m very happy to announce that I’ve signed a NEW Multi-Year Deal with @ringofhonor #TheMercenaryGetsPaid"

Gordon had signed a two-year deal with ROH in 2018 that was set to expire this year.

At ROH Free Enterprise in February, Gordon won a battle royal to get a future shot at the ROH World Championship. He was supposed to challenge for Rush's World title at Supercard of Honor in April, but that show was canceled due to the coronavirus pandemic. ROH has canceled all shows through the end of June.

Gordon is part of Villain Enterprises with Marty Scurll, PCO, and Brody King in ROH. Gordon & Scurll had been set to challenge Jay Lethal & Jonathan Gresham for the ROH Tag Team titles at ROH's 18th Anniversary pay-per-view in March prior to that show being canceled.

Meltzer just said WWE is going to make a big push to get Marty. AEW can't take him because people expect more of them. But WWE are already viewed as scumbags so they really don't care.
Top

I thought WWE would be interested, especially with it being close to the Rumble having him as a mystery entrant would make a lot of sense. I would surprised if he goes straight to Raw or Smackdown. NXT would be the best fit. That being said being New Japan exclusive til fans are more forgiving him popping up in AEW wouldn't be so bad. Right now, no way AEW will pick him up.

The whole allegations thing and his response to them was a very bad look on his part. Which is why AEW have to pass on him. Had he been more responsible for his actions there wouldn't be much of an issue. But for ROH to part ways the way things seem like they want to dissassociate themselves all together. But like you say WWE don't really care and they pick up one of The Elite. I don't know his contractual status with NWA so maybe he just works there for now.
Top

Is Marty in the US or UK? Because with travel restrictions this month he might not be able to fly in and quarantine 2 weeks in time for the Rumble if he lives in England.

And with NWA his deal was not exclusive so that won't matter. Plus they probably don't want him either since they already had their scandal with Dave Lagana. Whereas WWE stood behind Matt Riddle, who is accused of worse than Scrull, so they'll take anybody. 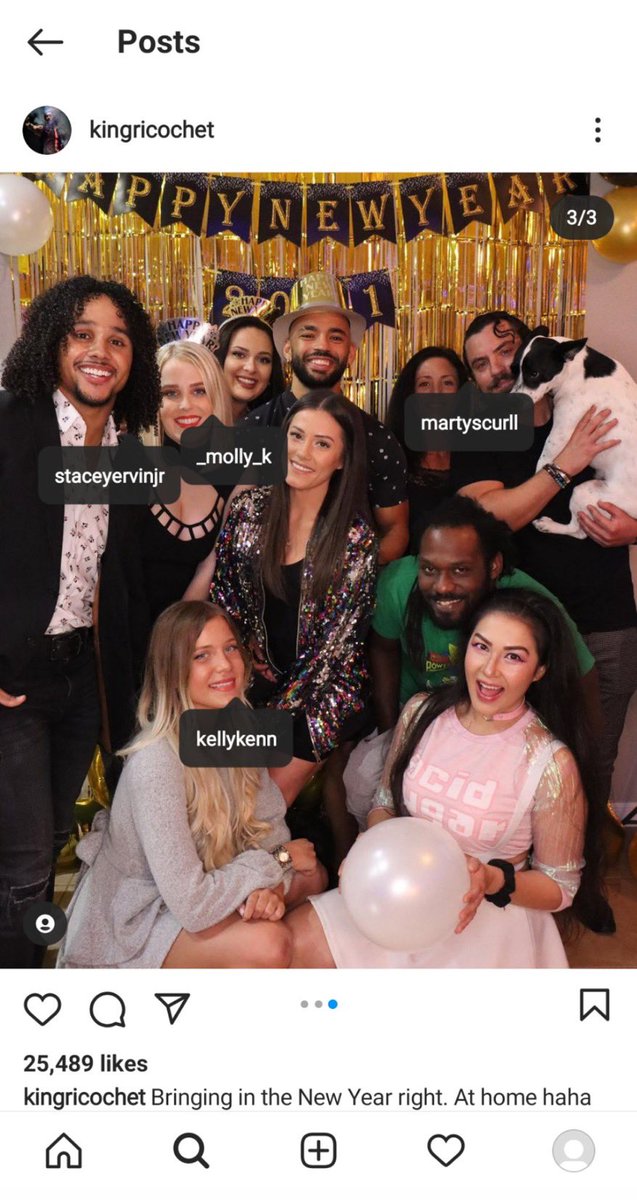 So being in the Rumble won't be an issue.

Also funny Ricochet is afraid to identify the three Impact wrestlers in the picture.
Top

Yea Marty lives in the US. If he is headed to WWE I wonder how much of a big deal they'll make of him there. His stock was way up before the MeToo allegations come out. He would have been top of the card in ROH now and was head booker. There was rumours of ROH and AEW possibly working together when he got that role too.

Other option might be Impact but since they dropped Mike Elgin, Joey Ryan and one of the Criss brothers I doubt they want another issue. If not for the pandemic, going to New Japan full time and have him slowly redeem himself in the fans eyes would have opened the door for a deal with AEW.

He hasn't been on BTE for ages, I don't know if he's still good buddies with the Elite guys (I assume he is) but being friends with them doesn't necessarily mean that Tony will okay bringing him in. The whole Cancel Culture AEW can't really be involved in because I've read some fans will quit watching AEW if Marty turns up.

If he's sincere in apologising for what he did and does sensitivity training like Sammy did then that could be a way to bring him in. WWE had Matt Riddle drop his first name over the MeToo allegations so whether they rename Marty Scurll (maybe he could go by The Villian) is another factor too. Because as much as WWE are seen as not caring, you can imagine certain fans complaining and contacting advertisers and such like they did with the Moolah memorial trophy.

Will be interesting to see where Marty does turn up. Being repackaged in the WWE developmental system I don't think is an option, so at the very least it would be NXT. Maybe have him take over Retribution and repackage them in a Villian Enterprises style faction might work.

I Wouldnt be too surprised if it's AEW though. As if he pops up on BTE in some funny skits and gets back in the fans good books it's possible that any uproar would simmer down and not be of concern. New Japan would be a good fit too but travel wise is a big issue right now. So really it's between WWE and AEW.
Top

I don't know about Cody, Omega and Page, but he did have a falling out with Nick and Matt over this since it was their call to cut him out of the more recent BTE shows he was on.
Top

An update regarding Marty, Dave said WWE were interested last year before he signed with ROH.

Interesting since ROH can't get AAA since they're working with AEW.
Top