Reading through some of the Wreddit comments it seems there's quite a good proportion of AEW viewers who are lapsed fans which is a big positive for AEW if they are bringing them back in. Their opinions on trying to get back into WWE but can't is interesting too.
Top

AEW Dynamite averaged 845,000 viewers for last night's show on TNT, topping the 615,000 viewers that NXT averaged on the USA Network. The gap of 230,000 viewers was the highest since March 18, which was the first closed set broadcast of the pandemic era for either show.

Dynamite was up 7.2 percent in total viewers from last week. In the 18-49 demo, the show ranked fifth on cable with a 0.32 rating, up 10.3 percent from last Wednesday and matching Dynamite's best number since March. The 845,000 total viewers was the best for the show since the March 18 episode, which featured the long-promoted reveal of the Exalted One of The Dark Order and the debut of Matt Hardy.

NXT was down 2.5 percent in total viewers from last Wednesday and had its lowest audience total since May 20. The show was actually up 21.4 percent in the 18-49 demo, averaging a 0.17 rating to finish 35th in the cable rankings for that category.

The combined audience of 1.46 million viewers was up three percent from last week.

AEW dominated the individual demo categories except for people over 50, where NXT had a slim advantage of 0.33 to 0.31.

Here's a look at the viewership totals and 18-49 demo ratings for both shows over the last 10 weeks:

Wade Keller got the AXS ratings. Impact did 162,000. That's about half of what New Japan did when they were on.
Top

I wonder if they re-hired Russo (& Ferrera) pushed the envelope a bit so they were close to being TV-14 whether they'd bring the lapsed fans back in. As right now they are close to having to do something drastic to bring the audience back.
Top

Back in the day I imagine the actual wrestling was secondary to the storylines & characters for the casual fans. If you watch an old SNME it just seems way over the top with everyone ramped up to 11 but I think a lot of fans got into it for that reason. Same with the Attitude Era with the OTT storylines and such.

Nowadays WWE just plods along and there are some characters like New Day who'd have fit right in the 80s WWF but the rest seem interchangeable and if you weren't a fan it's something you'd skip over if you were channel surfing.

I think why AEW works so well is because they seem to get it and that's why you've got so many entertaining characters and stories going on. I find Dynamite flies by every week yet even NXT is a chore to get through. Not the guys & girls fault, in ring talent wise it's arguably one of their most in depth talented rosters they've had for a long time.

It's just there's a lack of character development and the lack of creative on the wrestlers themselves part is telling. When they show their character outside of the WWE "bubble" they really come across well but within that bubble they become robotic and for me that's the real issue.

Storylines are important but you need to make the audience care and be emotionally invested in the character themselves before they buy into how the stories play out. Imagine Rollins/Rey in a Mid South, World Class, Crockett, ECW or even a 80s WWF. That would have been an angle they could have got a ton of mileage out of and drew huge money. Now it just came across as channel changing Wrestlecrap.

Its reflecting now in the ratings with so many fans tuning out. Big issue here is are they tuning out for good, because if so, next round of TV contracts will look drastically different. Fox and USA Network won't pay top dollar for a sinking product. Which could have a knock on effect across the board. Even NXT has fell off and that was keeping a proportion of fans on board with them not being a fan of the main roster shows but liked NXT.

I don't see Vince being phased out of the picture yet either, especially since the XFL 2.0 didn't work out. But WWE has to act now as if it doesn't pick up a year or two from now ratings could very possibly dip under one million for Raw.
Top

I think ratings could dip under a mill for Raw within six months, at the rate they're going. They need to completely revamp how they write wrestling, how they book wrestling, their entire approach to "creative." And Vince has got to get over his hangup of having five million people writing shows and PPVs and everyone planning everything word for word and move for move because it just does not work in 2020 any longer, but I don't think he ever will.
Top

Ocelot wrote: ↑
Thu Jul 30, 2020 6:59 am
I think ratings could dip under a mill for Raw within six months, at the rate they're going. They need to completely revamp how they write wrestling, how they book wrestling, their entire approach to "creative." And Vince has got to get over his hangup of having five million people writing shows and PPVs and everyone planning everything word for word and move for move because it just does not work in 2020 any longer, but I don't think he ever will.

It could be in September if the NFL season happens. If they're lucky they've already just got the hardcores who will watch anything. But it's very possible a million viewers could switch to Monday Night Football and Raw is close to AEW.
Top 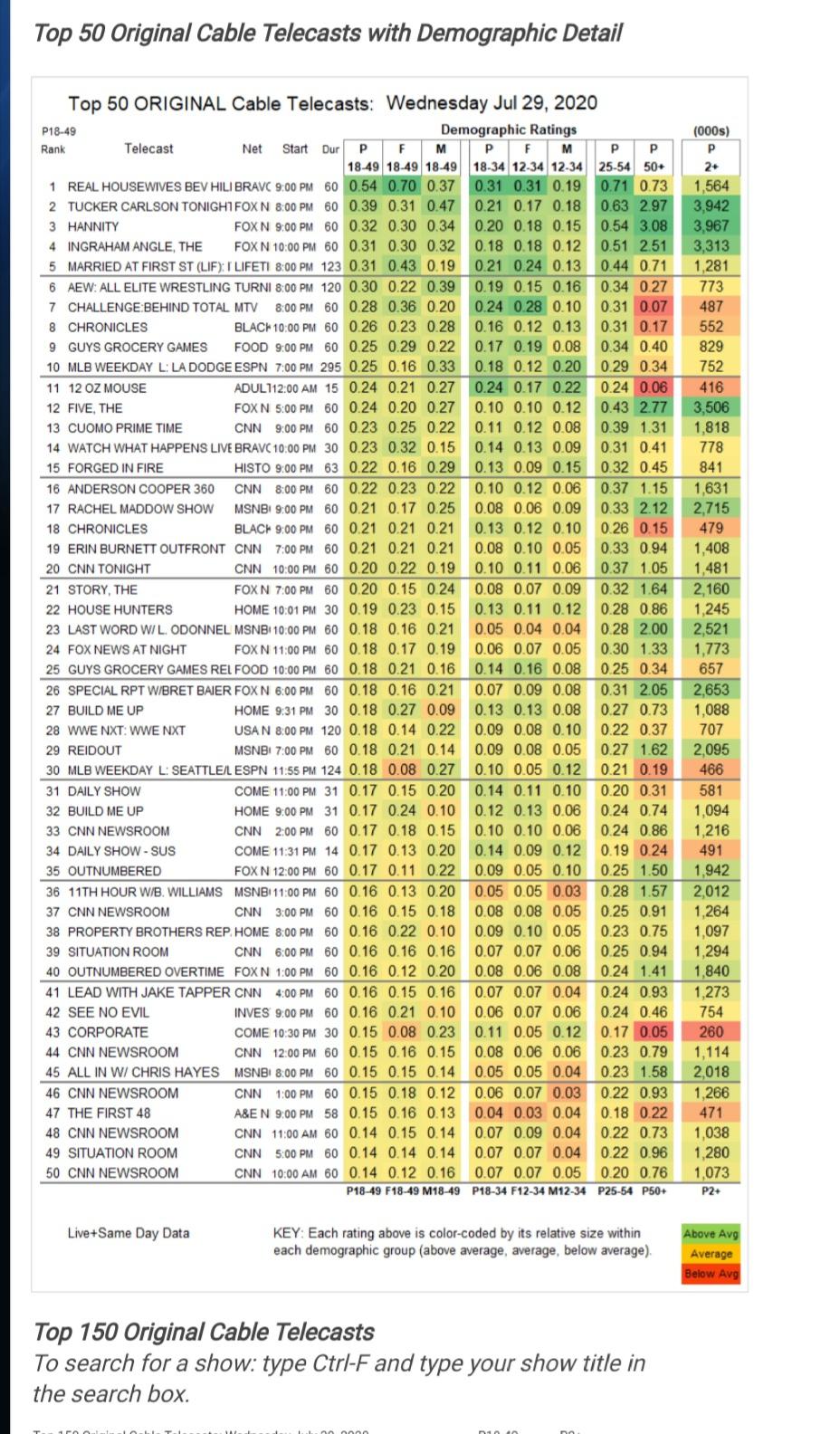 
Report Ad
The first hour was slightly ahead of last week (1.71 million to 1.70 million last week), likely due to the last day hype of the McMahon addition and the promised debut of a new stable. The key was that the second hour not only didn't decline, but it grew greatly to 1.82 million viewers before the show experienced a third hour drop to 1.61 million.

While the curiosity didn't carry over for hour three for the older audience, under 35 men and women continued to grow in hour three.

For one week, it was a success because without hyping much of anything this week until the last day and with NBA competition, the rating would have been lower than the last two weeks and threatened the all-time record low for the show. But, they averted that and grew against NBA competition.

That said, unless some of the new things resonate, you can only bring McMahon back once and Underground has to have legs for numbers to not go back to what they were before.

Big increase this week for AEW

Probably because Moxley was advertised for a while. He does their best ratings.
Top