There will be a Booker T roast on 11/10 at the Houston Improv. Among those roasting him will be Stevie Ray, Sharmell, Bruce Prichard, The Dudleys and MVP.

Off topic, I've heard HHH is a staunch Democrat. He's probably having an interesting time with Vince this month.
Top 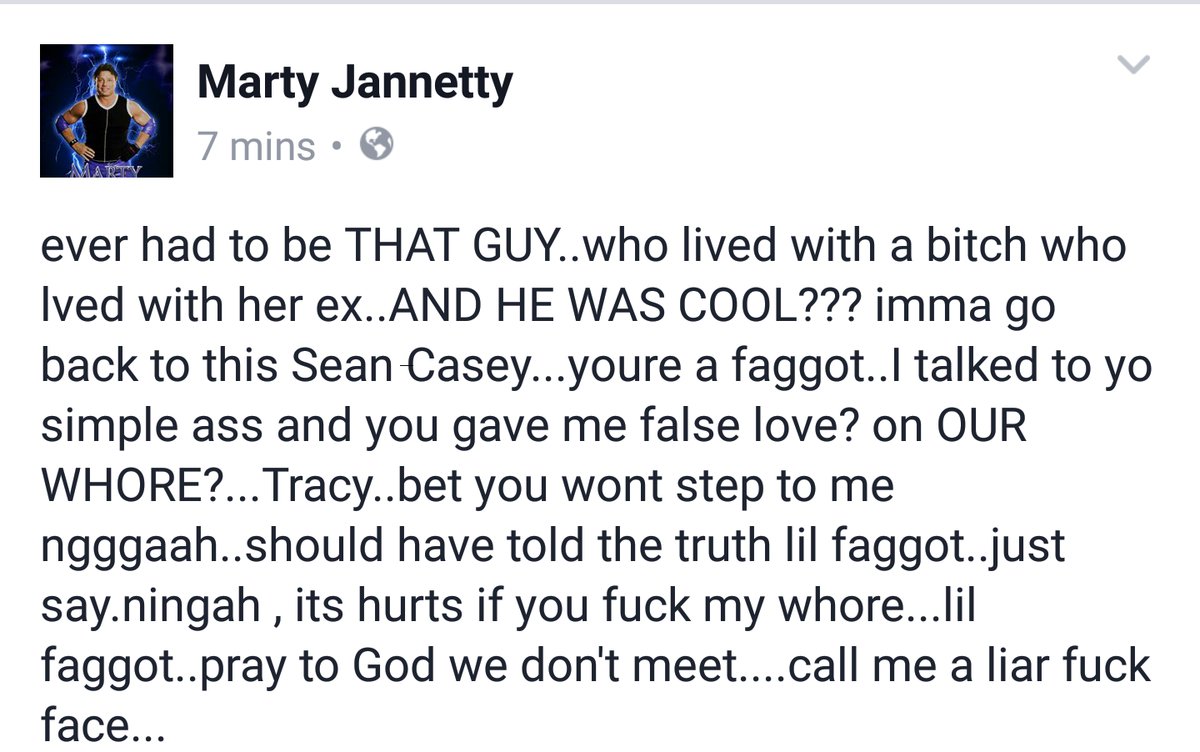 I came back to BG for the first time in weeks and that Marty rant is the first post I see. Oh how I have missed this place. Lulz.
Top

I don't know who to back on this one. Russo sucks, but Satin is a cunt.

I don't buy the stuff the production worker said. "He didn't want to do anything special for black wrestlers"? He put the belt on Booker when he had a stacked roster of guys who were seen as bigger stars than Booker was back then.

I don't think he's racist, he's just a hack writer asshole. The noose thing just sounds like a shitty attempt to get cheap heat done by a guy without any talent.

Plus Russo has said DLo is one of his closest friends.
Top


May 19th & May 20th the eyes of the Wrestling World will be on Wichita Falls once again!

Wichita Falls, TX, November 27, 2016 – 10 amazing individuals involved in the business of Professional Wrestling will be inducted into the Professional Wrestling Hall of Fame & Museum (PWHF) the 3rd weekend of May 2017. The PWHF is the only brick and mortar Hall of Fame & Museum that preserves the history of all of wrestling, honoring every aspect of the business – the good, the bad and the ugly.

The only Hall of Fame where the Inductees are voted in by a committee of their peers. Voters include living past Hall of Fame Inductees plus 20 other historians and wrestling legends. We are proud to say that this is the first year many of the Hall of Fame inductees returned their ballots to vote, the most ballots ever returned to be counted.

There are 7 categories with 10 people inducted each year, the results for the 2017 PWHF Inductees are:

Professional Wrestling has a rich history in Texoma, North Texas, Oklahoma, New York, Japan, Hawaii and around the World. Since moving to Texoma, increasing the awareness of the PWHF, we receive numerous notes from around the Globe from fans of wrestling. Here’s a tidbit from one of our many fans along the way…..

“As a child, I got into wrestling by watching WWF in the 80’s. It was the discovery of World Class that got me into the history of the sport. It was the wrestling magazines that got me involved in journalism as I wanted to write for those same magazines. All these years later and I still watch the current product, research and learn the history, and I’m still writing as well.”: ~ Michael McCurdy

Preserving the rich history of all Professional Wrestling, honoring & celebrating the Men & Women who put their lives on the line to entertain others is the reason the PWHF was organized.

The Induction Weekend of celebration activities will begin with a Comedy Show and Q&A on Thursday, May 18 th , Friday, May 19 th Wrestling Under the Stars with rising Indy stars and Saturday, May 20th including a tradeshow, Meet & Greet with past & current PWHF Inductees and legends ending with the Induction Banquet where Inductees will be presented with their PWHF custom ring, custom American Hat Co. hat with their name embossed in the band (just like the President-elect is being made) and their Hall of Fame plaque, like the one that will forever hang in the hall.

Who is Susan Green?
Top

Funny, that's the thing I was wondering as well when looking through that list.


Promoter Fritz von Erich had Green defeat The Fabulous Moolah for the NWA World Women's Championship in 1975 during a tour of Texas, but Moolah regained it at the end. The title change was never official. Moolah eventually purchased the legal rights to the belt. When Moolah sold the title to the World Wrestling Federation (WWF), the company disregarded anytime Moolah had lost the belt, making her the first WWF Women's Champion with a 28-year reign. Therefore, the WWF did not recognize Green as having ever defeated Moolah for the title. That same year, Green was voted Pro Wrestling Illustrated's 1976 "Girl Wrestler of the Year". In February 2, 1976 in a shoot match Susan Tex Green put Moolah in a submission hold after being struck in the face and held the woman's championship for several days before being forced by vince mcmahon Sr to surrender it back. This title reign was not recognized by the WWE.

She's one of the people suing WWE in that concussion lawsuit.

And here's an interesting article on her:

From her Wiki entry she's had a ton of severe injuries, including a crushed shoulder which is amazing she came back to wrestle. She must be a tough broad.
Top

Yep, she had a lot of injuries and illnesses, which looks like it kept her from being prominent in the 80s & 90s, which is probably why we hadn't heard of her.
Top

Sting finally gets into the WON HOF.

It's about goddamn time. He should have been in in 2004 at the latest. But Dave always talked people out of voting for him with the "he never drew except the year he wasn't wrestling" speech. But nobody was drawing in America in the late 80s/early 90s except a few WWF guys. So he should have been judged on his importance to the company. If he left WCW before Hogan came in, what would they have done? Have Dustin Rhodes as top baby face?
Top

You're right, he should have been in a while ago. Guess his short WWE run finally pushed people into voting him in.
Top

Bandit wrote:It's about goddamn time. He should have been in in 2004 at the latest. But Dave always talked people out of voting for him with the "he never drew except the year he wasn't wrestling" speech. But nobody was drawing in America in the late 80s/early 90s except a few WWF guys. So he should have been judged on his importance to the company. If he left WCW before Hogan came in, what would they have done? Have Dustin Rhodes as top baby face?

110% agree. To me Sting was WCW even with Hulk & friends were there. Without Sting being the guy when Naitch left to go to the WWF and Lex leaving for the WBF (then the WWF) WCW would have been in a real perilous state. Sting was not only the franchise, but the lynch-pin of World Championship Wrestling. I think his importance has been downplayed over the years, but I think if he left too there was no one really who could have stepped out to the plate and hit a homerun. Granted you had some solid talent on the roster - The Steniers, Rick Rude, Ricky Steamboat, Ron Simmons, Vader, Flyin Brian, Nikita, Cactus & Stunning Steve to name a few but I don't know if any would have connected with the fans the way Sting did. Plus Rude & Vader are perennial heels so I wouldn't have turned them even when the ladies loved Rick. I think you needed a Sting to go up against Paul E & the Dangerous Alliance, or to feud with the monster heel Big Van Vader. I think Bill Watts would have maybe went with Ron if Sting had jumped to the WWF but on the other hand he might have switched gears and went with Vader for a long time as heel champ in hope that Sting or Ric would come back to dethrone him. But 1992/93 without Sting, I don't know how they would have realistically gone forward without their 3 big marquee names.
Top

Guess his short WWE run finally pushed people into voting him in.

Which is funny since that run was worse than anything he did in WCW. Probably only the Abyss feud in TNA was worse
Top
Post Reply
879 posts