He likes to break his old Cabbage Patch out for Get The Party Started.
Top

Ocelot's buddy Bix has started a dirt sheet. Kind of.

Yeah, I don't believe that. They already had a deal with them to promote WWE. IIRC their partnership started in 2015. It's a way to get those 2 million or so die hard WWE fans (who will literally watch anything judging by Raw) to watch.
Top

The Jericho Cruise will have Ric Flair, Scott Hall and Jake Roberts. I hope they also bring Dr. Drew on board, because those three hanging out on a boat full of liquor for a week while struggling with sobriety sounds like a disaster.
Top

Get DDP on Speed Dial too
Top

He'll be there, actually. He's good at talking sense into Jake, but Scott has fallen off the wagon a few times and Ric is probably hopeless since he admits he's started drinking and some said he was drunk in that video he had to delete where he accused his former manager of stealing from him and went off on Shawn Michaels.

It reminded me of the time years ago Hall and Dennis Rodman were both booked to be on a wrestling show at a bar and everybody was terrified of those two getting together with an endless supply of alcohol. But Rodman ended up cancelling it (maybe his buddy Kim Jong Un needed him.)
Top

Bix has been baying to the world for 25 years now trying to be cool and relevant and all inside like his idol Meltzer but has failed miserably. Little suck up turd.
Top 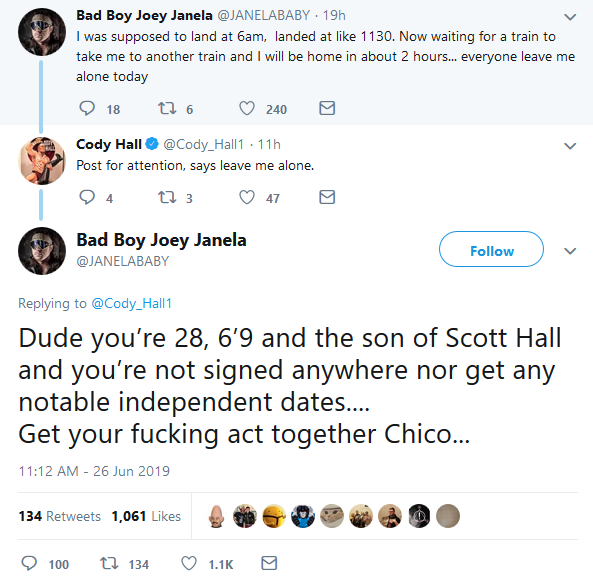 New Japan tried with him and he was awful. He might really be Kevin Nash's son.
Top

Cody could have been great but he didn't work nearly as much as he should have.
Top


When ECW went out of business I was 29 years old. I had a lot of my money, my parents’ money, trying to float the company. Paul Heyman, who I thought me and him were super tight, he screwed me over big time. He was in the WWE, the whole time. I had turned down hundreds of thousands of dollars to go to WCW. And now was unemployed. I went from a $750,000 offer, and Paul Heyman crying to me, that if I leave ECW, it will go out of business. Meanwhile, he was getting a paycheck from WWE. I don’t begrudge him, but then I did. I was depressed as depressed can be. I had women, I had fame, I had everything and yet it was the worst time of my life. It really was. I was doing indies, making decent money on the indies. But, I lived at home…

This is crazy for me to admit it, but I am doing it for a reason, just like I admitted to other things previously. Wrestlemania Houston (X7) Paul Heyman told me I was going to debut. All this stuff, when they had TLC and Spike Dudley came in, and Rhyno came in, and Lita came in. That was supposed to be my spot and then uh, that got ixnayed. Then there was gonna be a hardcore 24/7 thing, that was gonna be “all about you”. That was when I was supposed to debut. I remember I did a show there, and I saw a sign that said “Guns Welcome” and I was in Houston. I did an indie show, and I said: “What is this?” I’m from New York, what do you mean “Guns Welcome?” and they said “Oh you are allowed to bring a firearm into the venue.

I was across the street from the Astrodome. When I tell you it resonated in my head so, so much. That I’ll tell you what I wanted to do. It’s sick that I think this. At Wrestlemania, I was gonna hop the rail and I was gonna whack Paul E. in the back of the head right at the announce table, then I was gonna whack myself. The ultimate martyr, I was gonna hit my pose crack, boom, pull the trigger. Because I was that insane.

Don’t know if I would have went through with it, but that’s what I was thinking about every day. I was like “I will go down in history.” Pop, boom. First, they’d think it as an angle until I shot him. I was so severely depressed and so mental with rage, I needed help. That help came from a phone call from Jim Ross. Randomly I get a phone call from a number I didn’t know… I didn’t pick up, and I remember having these thoughts, and it was bad. I had a gun, I was psssh man. Could you think about the horribleness that I would have done for my legacy?

I would have ruined Wrestlemania, which I love Wrestlemania. For everybody. These thoughts were so so crazed in my head. How dare that person, he screwed my parents over and I come from a mobster mentality. In my head, I was like “I would become infamous.” Which is famous for the wrong reason. I’m glad I didn’t do it. But when that phone call came from Jim Ross. Again, just said leave a message. It said “Hey Tommy it’s Jim Ross, just want to let you know, we are still thinking about you, we are gonna get it done, just got to hang tight. Thank you.

Think of how stupid I would have been, how dumb and how messed up my thoughts would have been if they would have come to fruition. I am so happy I didn’t do it, I am so happy that I did get that phone call, from someone who was a stranger, I barely knew the guy. There was another day, there has been a lot of other days.

Just shows how a moment of madness went through his mind but the phone call from JR snapped him out of it.
Top

My heart goes out to Tommy. Such an unsung hero and underappreciated talent.
Top

Still one of my favorite books. I read it every year or so and learn something new about wrestling every single time.
Top

Ocelot wrote: ↑
Mon Jul 01, 2019 1:50 am
Still one of my favorite books. I read it every year or so and learn something new about wrestling every single time.

You might like the Nitro book by Guy Evans, then. It's very straight forward with no editorializing. And far more detail.
Top

Bandit wrote: ↑
Tue Jul 02, 2019 1:37 am
You might like the Nitro book by Guy Evans, then. It's very straight forward with no editorializing. And far more detail.

Along those lines, is REDACTED I was a member on BG well over a decade ago and didn't realise this forum was still going until today, it just disappeared for me one day :'(
Top

Any chance for a link to the nitro book? In THAT WHICH SHALL NOT BE NAMED?
Top

handwrittenhysteria wrote: ↑
Tue Jul 02, 2019 2:10 am
Along those lines, is REDACTED I was a member on BG well over a decade ago and didn't realise this forum was still going until today, it just disappeared for me one day :'(