Awesome. You could do some damage if you drop that book on your foot. Even the digital version.

Wade Keller fired Bruce Mitchell for claiming AEW and Brodie Lee's wife are lying about him not having COVID. Wow. I saw all the drama on Twitter about it over the past few days but didn't think Wade would let him go.
Top

And people are saying Conrad Thompson is going to stop Bruce's show on the Ad Free Shows Patreon because he's pissed off about him too.
Top

This was the column BTW

It hurts his family, the wife and family he worked so hard to provide for. He loved them and they loved him.

It hurts his pro wrestling family. He worked with everybody in WWE, the industry leader. Every major name, from Stephanie McMahon and Triple H on down shared what he meant to them personally and professionally – how he bonded with them in simple, human ways and how important he was to their work.

It hurts his fans, who were happy to see him finally arrive at the cusp of the real stardom they had seen in him all along.

Even though he could provide very well for the family he loved best by staying with the industry leader, he decided to gamble on his talent. He partnered with AEW booker/owner Tony Khan to create the main-event money-drawing star he saw himself as. His wife, with three young children at home to raise, backed his decision to leave WWE to find his destiny, even though it would mean less money in the house to start.

Heart-breakingly, that gamble was paying off.

Brodie Lee was aptly named. Like Bruiser Brody, he had the physical presence, the strong style, and the iconic look to not only follow in the real Hardcore Legend’s path, but to do it better than anyone else had, including John Nord, since Brody’s murder.

No matter his size, look and presence though, there was no room for Luke Harper, his WWE persona, to dominate WWE’s 50/50 booked arena. Bruiser Brody’s character didn’t work in every context either. He had to be allowed to dominate to be able to sell tickets in great numbers.

There was no better example of the forces in WWE that stalemated Luke Harper than in what happened with his team with Erick Rowan, The Bludgeon Brothers. Here were these two outlaws, the modern day Brody & Stan Hansen, music and costuming meticulously detailed out to the Corporate T, clearly emphasizing the company over the fighters, strangling the act before they even started walking to the ring, . There’s no place for the bad-ass likes of Brody & Hansen in the mid-card. There never was.

But then there was the gamble to join AEW. There was the newly re-named Brodie Lee, dominating everywhere. He dominated the Dark Order, giving a gang of geeks his presence and credibility. Lee re-established the dominating finisher the Lariat as physical punishment like no one (no, not even WWE’s JBL) had done since the days of the Masked Superstar in New Japan Pro Wrestling, Brodie took out AEW TNT Main Event Champion Cody on national TV in front of a million fans with one killer Lariat and took his championship away from him, fair and square.

Lee forced Cody’s character to dig deep, to being back the darkness in his hair, I mean his soul, in order to even get in the ring with him for the rematch.

Brody Lee and Cody Rhodes then brutally re-established the worn-out old strap match gimmick and overcame the handicaps the Covid-19 Era placed on professional wrestling matches, literally knocking out one of the best matches of the year. Brody Lee was right there ready to grow with AEW into one of pro wrestling’s very top stars, taking his on-air stooges in The Dark Order with him.

Then, he just disappeared.

AEW and WWE had already been compromising pandemic health standards by gathering in Florida to even have events. It’s no secret that both companies, WWE in particular, have not been transparent as to the consequences to the people involved of even putting on these shows. They both continued to run even when bigger money, more popular cultural entities like the NFL, the NCAA, the NBA, and Major League Baseball stopped , then cut back on events. The decision to do this didn’t just put the independent contractors and their families at risk, but strengthened the pandemic itself by compromising social distancing, thereby strengthening the virus putting everybody, everywhere at more risk of getting sick and dying.

It’s also evident to anyone who knows professional wrestling history that companies have long covered up the health risks involved in the lifestyles and standards the business often requires. Look no further than how WWE reacted in the wake of the Chris Benoit murder/suicide for a strong, irresponsible example. Wrestlers and wrestler families who wanted to stay employed in the business also participated in these compromises in exchange for employment, or even the possibility of future employment.

The Head of the Table isn’t just a storyline,

Understandably in the Covid-19 Era the silence surrounding his absence led to many, myself included, wondering whether he had contracted the virus.

AEW and Lee’s family kept a very tight lid on what was going on with him and how serious Lee’s medical situation actually was. It turned out to so serious that he was being treated at the Mayo Clinic for it.

With his passing, Brodie Lee’s wife issued a statement noting the enormous support his family had received from AEW and the doctors at the Mayo Clinic during his illness. She stated that her husband had died “after a hard-fought battle with a non-Covid-related lung issue.”

That leaves the issue, though, of why Brodie Lee, his family, and AEW kept such a tight lid on information during his illness. People who have had COVID-19 have gotten lung damage that remained after the virus had left their system and they then tested negatively for it. Could this be what Kee’s wife meant, that he had already recovered from a bout with COVID-19 and was then suffering from this lung issue? Why would the family and AEW stay so quiet about what was going on if it was not COVID-19 related at all? .

Our country as a whole has not effectively worked together to lower the odds of the pandemic growing and now we’re in the midst of a surge that has made COVID-19 more dangerous than before. Do you know people who have suffered and died from COVID-19 now?

There’s even the possibility that the virus has mutated to become even more deadly. Vaccines may very well turn out to be effective in the fight to push back COVID-19, but at best that pushback is months away.

There’s no guarantee in the face of this, that pro wrestling or the NCAA or any other major league sports will see their way clear to continue in the face of how strong the pandemic surge is now.

The one thing that will put a stop to any of these sports faster than anything else is the death of a major player, like the University of Florida Gators college basketball star Kevontae Johnson, who was put on a ventilator after collapsing on the court during a game or a major national TV pro wrestling star dying because of something relating to this.

I’m not a doctor, but I’ve never heard of an athlete the size and in the shape Brodie Lee was in to be able to excel in his last two matches suddenly developing a lung condition that serious that quickly.

Whatever the circumstances, Brodie Lee’s family and AEW both would serve his memory best by being forthright about all the circumstances surrounding his death, whatever they are, thereby honoring him by allowing us all to make the best-informed decisions possible protecting everyone’s health.

Bruce Mitchell is a twat and has been a twat for almost 30 years. He's a bedbug on the ass of wrestling and has not contributed one single positive element to the wrestling business.
Top 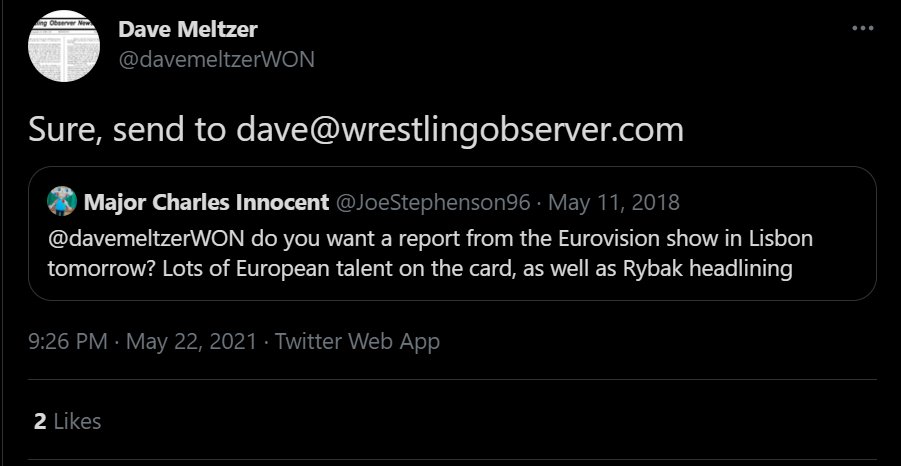 They watched a lot of Konnan in WCW.
Top
Post Reply
118 posts