Don't know if this deserves it's own thread just yet but it doesn't really fit in the indy thread.

ITV has commissioned a one-off wrestling special to air later this year.

Commissioned by Helen Warner for ITV and produced by ITV Studios Entertainment, World Of Sport Wrestling or WOS Wrestling will see some of the UK’s top names in the sport compete in a fun-filled afternoon of family sports entertainment.

The two hour special will see some of the UK’s finest pro wrestlers including, 'The East End Butcher' Sha Samuels, Dave Mastiff and 'Viper' Kimberly Benson, compete in front of a live audience across a series of fights; from singles to tag team and eliminations. Commentary will come from America's number one wrestling commentator, Jim Ross.

Backstage, viewers will catch up with the wrestlers between fights and at the end of the show one fighter will take home the WoS Wrestling belt.

Tom Mclennan, Creative Director, ITV Studios Entertainment said: "World of Sport Wrestling was a major event for millions of families every Saturday afternoon for over 20 years. I'm excited about bringing back this iconic brand and celebrating the best British wrestlers in the country."

WOS is an ITV Studios Entertainment production for ITV. The Executive Producers are Tom Mclennan and Simon Marsh.

Re: World Of Sport Wrestling

Apparently JR's on board as an announcer. Kent Walton was the original voice of World of Sport which at his peak was hugely popular in the UK.
Top

Re: World Of Sport Wrestling

Yeah it mentions JR in the article. He's doing the first special.
Top 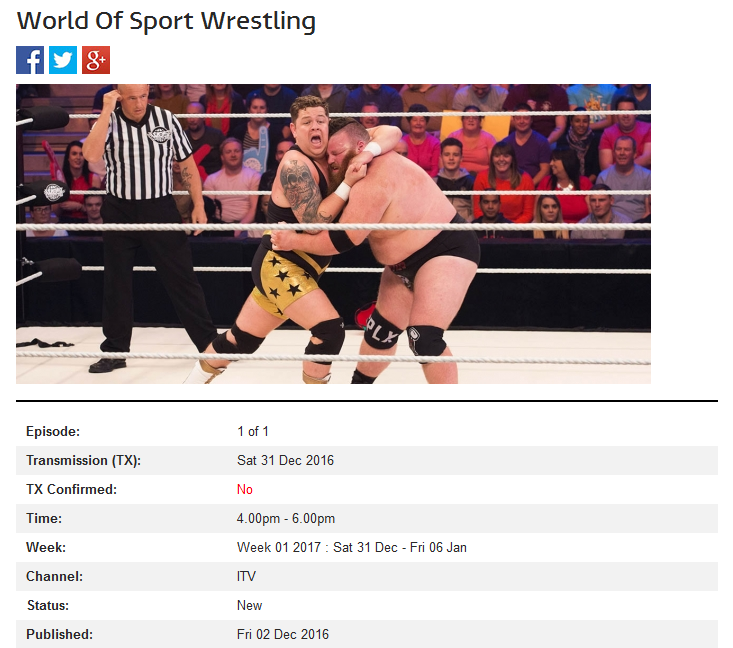 We told you time and again that we're on the hunt for the best independent wrestling from across the globe.

IPW:UK, founded in 2004, is based in Rochester in the United Kingdom. The IPW:UK World Championship is currently held by ring veteran Jimmy Havoc.

We have partnered with IPW:UK to carry all of their 2017 Supershows live, and they'll exclusively be on FloSlam. These shows are scheduled to occur every other month beginning with SuperShow VI on January 22nd, 2017.

These cards feature wrestlers familiar to fans of the world's top independent promotions and are sure to be instant crowd pleasers.

But don't take our word for it. You'll be able to check it out for yourself. As part of our partnership with IPW:UK, all previous SuperShows will also be available in our library. Look for those beginning next week. You're gonna dig them.

And there's more. The addition of IPW:UK marks the official launch of our new FloSlam World Premiere events.

This series will feature events that are pre-recorded, but we'll air them in streaming format just like our usual live events. If you're a wrestling fan, taped cards are nothing new for you. We're bringing that age-old wrestling tradition to the modern, streaming world. You'll tune in to the stream just like you would any live event. All you have to do is avoid spoilers, right?

We hope this serves as a catalyst for fans from around the world to watch amazing wrestling together and discuss it in real time via social media.

This new concept will allow us to bring you wrestling from venues where it proves difficult to deliver you the kind of world-class live stream FloSports is known for, and it frees us up to bring you even more exciting wrestling from a wide variety of promotions around the world.

Best of all, it will allow us to fill the void during midweek off-nights, as who wants to go a day without wrestling? I mean, not me. If you can't join us for the premieres, we'll still post the video on demand for you to enjoy on your own schedule.

Our first IPW:UK FloSlam World Premiere will debut right before Christmas. It's IPW:UK SuperShow 5, which features a main event of Cody Rhodes vs. Will Ospreay. These two tremendous talents have never faced off and frankly, we are confident this is going to be one hell of a match.

December is just the start of our IPW:UK FloSlam World Premieres. In 2017, we'll exclusively debut five additional IPW:UK shows in the months in between their live SuperShows. And all of these events will be added to our growing library of great pro wrestling action for you to enjoy at your leisure.

Now, FloSlam subscribers will have access to 16 more world-class indie wrestling events over the next year via our partnership with IPW:UK. Combine this news with our announced partnerships with EVOLVE, SHINE, Full Impact Pro, American Combat Wrestling and House of Hardcore, and we hope you can see our dedication to providing tremendous value for all wrestling fans.

Don't wait to sign-up, either, or you'll miss our exclusive live broadcast of House of Hardcore 21, starting at 8pm EST tomorrow night. On top of House of Hardcore 21, you'll get access to all of our live events, unlimited usage of our deep historical library, our upcoming slate of FloFilm feature documentaries and our FloSlam World Premiere events.

The American Spike TV? I thought they swore off wrestling forever after TNA ended on bad terms with them.
Top

Yea we get a version of Spike TV here. Mostly old movies and Bellator. I think ICW would have been better, more chance to have a cult following too considering its more ECWesque.
Top

thanks to impact theres gonna be 2 shows to watch, 3 if you include xplosion. Wonder if any tna guys will appear, other than Grado if he still has his tna contract
Top

I think Double J is the guy behind the WOS deal so Spud and Grado will be on the show since he's back in charge at Impact Wrestling. Not sure if Grados still contracted to ICW though. I think it's like the old territory days when he works for different promoters. He was on a soap opera too on BBC Scotland called River City, so he could be the next breakout star in the U.K.
Top

I don't know why he isn't a break out star period, everything he does is great. Especially with the Hardys stuff gone he should steal the show. He should be what Eric Young was before Vince Russo came back and ruined him with that dumb Miss Brooks angle.
Top

Brawl breaks out at World of Sport Wrestling press conference

Fans got a taste of what's to come when World of Sport Wrestling returns to ITV as a press conference descended into a wild brawl.

The channel has teamed with America's IMPACT Wrestling to deliver a new series of the iconic show on Saturday afternoons - after a 30-year absence.

Ten new episodes will be taped over two nights at Preston Guild Hall on Thursday, May 25 and Friday, May 26, with tickets released on Friday, April 7.

WOS Champion Grado declared British wrestling was "back where it belongs" in an event held at TV studios in Media City in Manchester.

But when the Scottish fan favourite responded to the insults of 'East End Butcher' Sha Samuels by calling him a "big Cockney dafty", all hell broke loose!

The aggressive Londoner blindsided Grado with a right forearm - knocking him to the floor - before Ashton Smith, Johnny Moss and Rampage Brown joined in.

The 'Mexican Sensation' El Ligero came to Grado's aid, only to be hurled into Liverpool's Zack Gibson, while high flyer Kenny Williams also took a beating.

Yet Grado fired back with a series of elbows to send his opponents scurrying backstage, before IMPACT boss Jeff Jarrett held the champion's hand aloft.

The new series comes after a two-hour WOS pilot, which aired on ITV on New Year's Eve, featuring some of the finest talents on Britain's independent scene.

Jarrett said WOS would become a "full-on wrestling promotion" , with plans for live tours, merchandise, licencing and even pay-per-views being discussed.

Ex-IMPACT World Champion Nick Aldis, from Norfolk, was unveiled as the newest member of the roster when he made a surprise appearance.

International talents from the US, Japan and Mexico could also be joining the show, along with new women's stars to challenge the Scottish standout Viper.

Jarrett confirmed there would be no restrictions on WOS talents working for other independent promotions, but said they could not appear on other TV shows.

The show's new executive producer said WOS would be founded on a core of British wrestlers - the "nucleus" of the roster - supplemented by IMPACT talents.

The ex-WWE, WCW and IMPACT star added: "The British scene is red hot, so IMPACT will have its influence, but WOS Wrestling is going to have its own flavour."

Tickets for the WOS tapings, with doors at 7pm and first bell at 7.30pm, go on sale at 9am on Friday, April 7 from Gigsandtours.com / Ticketmaster.co.uk / prestonguildhall.co.uk
source
Top

And Liam thought he was the guy in The DMAs.
Top

That Rev Pro show from Friday was fantastic. Why hasn't WWE signed Ryan Smile? I know he'd have to tone down those crazy dives since that's stuff they'd only want you breaking out on a big PPV, but he's way better than most of 205 Live.
Top

5 Star Wrestling announced they were closing. I'm not sure if they ever even produced a 3 star match.

It just sucks as good as British wrestling has been the past 3 years they were the ones who got a TV deal. Rev Pro is as good as any promotion, but 5 Star was like Destination America era TNA.
Top
Post Reply
22 posts