They should port DreamSNES to the PS5. Maybe it would run fullspeed with sound and no frameskip with the power of the PS5!

Thank god Vice City is gonna be there, I dont wanna buy all 3 just to play it & thats even before all those bugs/wierd graphics etc.... were discovered, VC is best of its time & thats all I want & now its being delivered
Top

The electronics giant shipped 3.3 million PS5 units during the three months ended September 30, 2022 (FY2022 Q2), it said, which is the exact same figure it managed during the same period last year.

That brings total PS5 console sales to 5.7 million for the first half of FY2022, which is far short of Sony’s unchanged target of 18 million by the end of its current fiscal year in March 2023.

Speaking during an earnings call on Tuesday, Sony said PS5 sales were going according to plan and that it believed it could still achieve its 18 million sales target. The company manufactured 6.5 million consoles during Q2, it claimed.

Sony said its decline in gaming profits was due to an increase in game development and acquisition costs (including its purchase of Bungie), as well as a negative impact of foreign exchange rates reflecting a high ratio of USD costs.

The increase in gaming revenue was partially attributed to an expected increase in hardware sales due to recent price increases for PlayStation 5 hardware.

Profits for Sony overall increased by 8% to ¥344 billion ($2.32 billion), as strong performance by its music and imaging business offset the declines in gaming.

Software sales increased during the quarter at 62.5 million units – up from 47.2m in the previous quarter, but down from the 76.4m managed during last year’s Q2 window.

Digital software accounted for 63% of quarterly game sales, up from 62% a year earlier.

For the second quarter in a row, the company saw a decline in the number of PlayStation Plus subscribers and PlayStation Network monthly active users (MAUs). 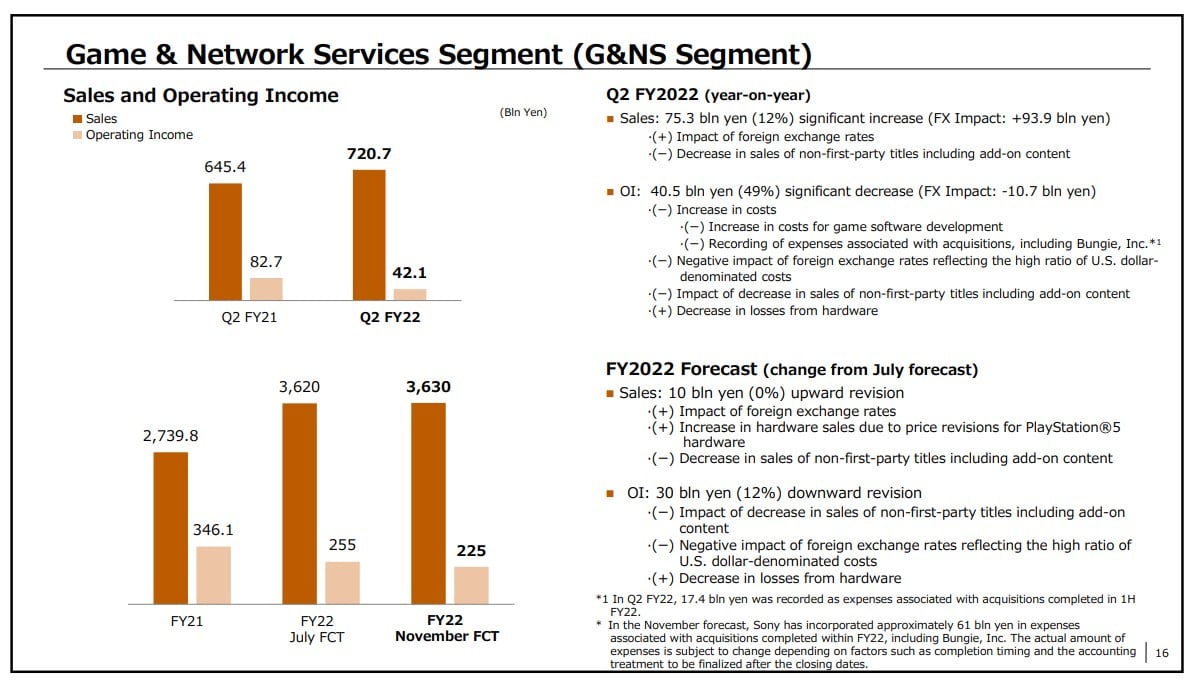 PlayStation Network MAUs totalled 102 million, down from 104 million a year earlier and 103 million in the previous quarter. This appears to be Sony’s lowest MAUs figure since it began reporting this data in early 2020.

Sony said it will aim to ship 23 million PlayStation 5 consoles in its next fiscal year, which begins April 2023, which would put the console ahead of PS4 during the same stage of its lifecycle.

Sony said in May that it had shipped 11.5 million PS5 consoles during its financial year ended in March 2022, missing out on its initial target of 14.8 million consoles by over three million units, which it said was due to parts shortages.

However, the company said it expects to sell significantly more PS5 consoles during the current fiscal year ending in March 2023, at around 18 million units.

During an earnings call on Tuesday, the company said there was no change to its 18 million PS5 sales forecast for this fiscal year.

There were big advances over 5 years back in those days. Not so much now, especially when they could just patch it and make it look and run great on the PS5.
Top

I don't think any well made game needs a remaster at all. If you need to remaster or remake a game you should have made it better in the first place.

But even though we don't notice the changes because it's a gradual process, there's always big changes happening, and things are changing as fast now as they always have.

5 years in tech and 5 years in games is huge even if you don't immediately notice it.

I wish Sony didn't hate old games so much because there's quite a few good old games now (well a shitload) that you simply can't buy anymore.

Still waiting for the PS5 to get it's killer app by the way.

It'll happen eventually.
If I should Die Hard Arcade before I Alan Wake.
PREY the Lords of Lore my Soul Calibur to Take-Two Interactive.
Top

pesky kids playing in the sun, get off Sony's lawn & play some Playstation!
Top

I never leave the house and I still wouldn't subscribe. Sony, don't blame outside because your service is shit and you have trouble getting consoles into hands of actual gamers instead of scalpers.

Get me a PS5 for $300, put every game ever made on every PlayStation console on the service and I'll subscribe for $100 a month. Otherwise, go to hell!
If I should Die Hard Arcade before I Alan Wake.
PREY the Lords of Lore my Soul Calibur to Take-Two Interactive.
Top

Following months of speculation, the name ‘Returnal’ was added to the PC entry on Tuesday

Following months of speculation, a PC port of PlayStation’s PS5 console exclusive Returnal has been all but confirmed, after a Steam database entry was updated to reference the game.

The steam listing for Codename ‘Oregon’ first appeared earlier this year, and was strongly suspected to be related to the Housemarque roguelike due to localisation strings which appeared to reference locations from the game.

Now, an update made to the database entry on Tuesday has seemingly put to rest any doubt that the listing in question is related to Returnal. As seen below, the entry’s change list shows “Returnal” being added to the title’s save games directory, before being edited out hours later.

Beyond the Steam listing, there was already a fair amount of evidence to suggest the PS5 exclusive is coming to PC.

A video showing off the settings menu for a PC version of Returnal seemingly leaked online in September, before being removed due to a copyright claim from Sony Interactive Entertainment. Before that, VGC was provided footage appearing to show Returnal running on PC.

And last year, a PC port of Returnal was included in the huge ‘leak’ of unannounced games on Nvidia’s GeForce Now streaming service.

Many other games on the leaked list have since been released, including the Grand Theft Auto Trilogy remasters and the PC version of God of War. Another Sony game mentioned on the list, a PC version of Sackboy: A Big Adventure, also appeared in the Steam backend last year and was eventually released this October.

Returnal was released for PS5 last April and is Finnish studio Housemarque’s largest and most ambitious project, following several decades focused on 2D arcade-style shooters such as Super Stardust HD and Resogun. Following the game’s release, Housemarque was acquired by Sony.

PlayStation boss Jim Ryan said during a business briefing in May that Sony expects half of its annual releases to be on PC and mobile by 2025.

Housemarque’s senior narrative designer recently told VGC that the studio plans to incorporate ideas and narrative systems originally planned for Returnal into its next original game.