80.jpg
The Commodore 64 holds a special place in the hearts and minds of many geeks, myself included. It was the first PC I ever played with, and it might soon be the newest computer on the market if a crowdfunding campaign is successful.

It's been a long time since the original C64 was in production. This re-imagined version of the original comes from Retro Games, a company in the UK that wants to bring it back in two forms, as a desktop and a handheld.

The desktop version will still come packed in a beige keyboard, but one that's less bulky than before. It will also have some updated amenities, such as HDMI output, USB ports, mini-USB power socket, an audio jack, SD card slot, and a cartridge slot. You can expect updated guts as well, though Retro Games didn't provide any specifics there.

The handheld version looks like what we'd picture as the lovechild of an original Game Boy and NES controller if the two had relations. It's outfitted with a D-pad, two fire buttons, function buttons, power and menu buttons, volume controls, micro USB power socket, micro-HDMI output, and an audio jack.

Both systems will come pre-loaded with games, and Retro Games says it will be "REALLY easy to add more titles" to the mix from the "thousands of games you can legally download off the Internet."

You can check it out here.

Source: PC Gamer
You do not have the required permissions to view the files attached to this post.
Top

With the ZX Spectrum Next currently enjoying the limelight across Kickstarter and other numerous outlets, The64 has now arrived at the door to bring us some news on the progress on this upcoming new “Retro” machine. With news including securing a worldwide manufacturer / distributor and the The64 MINI’s new role in the product chain, there is a lot to take in…

For those that have been following the regular updates over the past few months you’ve seen numerous CAD and plastic designs of The64 MINI as well as the handheld unit. Now the announcement has come in that the team will be working with a major international distributor and manufacturer, and it’s thanks to this along with feedback from numerous sources including: customer feedback, market research and industry sector trends, the product range has been re-envisioned; centring the machines around The64 MINI meeting the needs of a wider range of customers 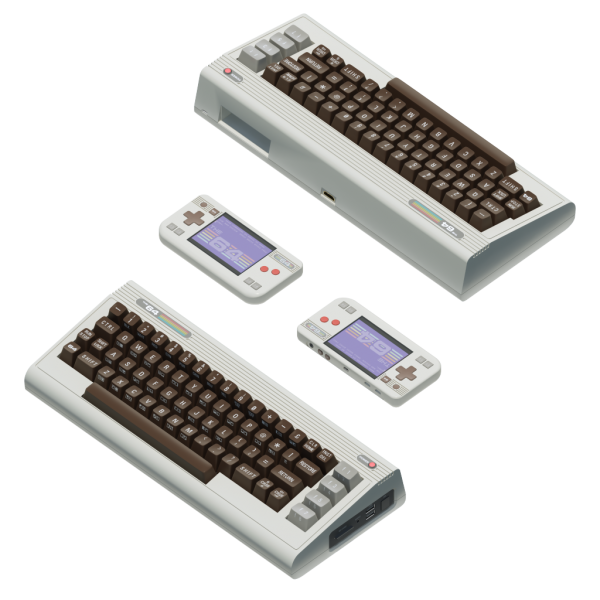 “This is fantastic news for the product, and particular the backers of the Indiegogo campaign, as we fell short of our campaign funding target which, frustratingly, slowed our progress. With this global partner, we have the missing infrastructure and backing to complete the projects without having to secure further funding.”

As for the name of the company – The64 team are working with – this will be revealed in the next few coming weeks.

There is also news on the User Interface (UI). As the product range has changed the team at The64 have had new ideas in relation to the UI and we’re told they’ve done some “cool things” with it, not only this but also it looks “beautiful”. On the games side of things – it appears -this keeps getting better.

Relating to the games we were told – as the backers – we will get a chance to vote on which games will be added come the final release, as mentioned back at the beginning of April. Finally the team goes on to list their forthcoming plan of action.

- Once the partner paperwork is through, we will have direct access to marketing, factory and distribution channels, and will be laying out a comprehensive, graphical and trackable timeline so you can call follow progress.

- This timeline signifies the start of the production process, so the clock will be ticking.

- We will commission packaging proofs and let you have a sneak peek.

- The free extras we’re adding as a thank-you for backing us and being patient will be revealed, and we might even throw in a few more! it’s hard not to feel generous when you’re as excited as we are!

- Once we have the UI working coherently, we’ll release a for-your-eyes-only walkthrough of the key features.

It's very weird seeing the Commodore 64 being sold in places like JB Hifi & EB.

65 quid over here, if it werent for shipping costs it'd almost be cheaper to order the UK model, kind of tempting but theres a lot of tempting retro bits lately I'm trying not to splash out on till my bills are under control
Top

There's been a lot of firmware updates for this of late (probably due to the US release), which has fixed a lot of the problems and added improvements.

- Corrects a recent firmware issue that prevented joysticks like the Logitech F710 from being detected
- V1.1.2 – Fixes an issue where some USB directory layouts result in an empty file list
- v1.1.1 – Amended USB behaviour to help resolve issues users experienced with some USB memory sticks when using the File Loader
- v1.1.0 – Introduces the File Loader so compatible programs can be loaded from USB. See File Loader for further information
- v1.1.0 – Fixes a small issue with the German Virtual Keyboard
- v1.1.0 – Adds the in-game help function in ‘Avenger’ to button A on the joystick
- v1.1.0 – Includes various firmware optimisations and enhancements.
Top

There's talk of a larger one being released too with a functioning keyboard according to what Dave the 8bit guy is saying.
Top

nevermind didnt notice it above
Top

How much is the full size one supposed to cost?

Don't know yet. Probably more expensive than the Mini.
Top


Pre-installed on it will be C64 classics such as California Games, Paradroid, and Boulder Dash, along with Attack of the Mutant Camels, Hover Bovver, Idris Alpha, and Gridrunner.

Hawq posted the first video in the retro thread but I thought I'd stick it in here with a few others.

ah my first computer, had a nice version of Gorf in it, gotta say the release plans backwards though surely the Vic shoulda come before the C64 mini
Top