Does anybody here use these much? I've never had much a need for any of them myself. To me the Xbox 360 controller works pretty good for all systems. I do sometimes use an original Sega Saturn pad with an old adapter I have but even then not much as it is easier to just have one controller set up for everything.

The reason I bring this up is that I recently bought an N64 USB controller. The 360 controller style works fine on N64 emulators but the N64 controller is pretty unique and it has been years since I've used one. So I figured I'd pick one up and see if I'm as good at Mario 64 with it as I am with a 360 controller. I'm hoping the quality will be decent but it was pretty cheap and made in China so we'll see. This is the exact one I purchased.

Only $12.89. I went with green as that is the main one I used back in the day. Has anybody here ever tried one? With the non 3d retro consoles I'd imagine the controls all work fine since they are digital but with 3D you never know if the analog stick they use will be garbage or not. I'm not expecting perfection just that it will be good enough to play Mario 64 and a few other games for awhile then probably put it up and not use it again for years.

Way back in the day in the early 2000s I had a USB device called an Adaptoid that allowed you to use real N64 controllers on your PC. I can't remember how much it was. I want to say like $17. Then they became rare and desirable so I ended up selling it a few years later for around $100! Looking on Ebay there are only 2. One for $491 and the other is $750. None are listed under sold items so nobody is paying that crazy ass price. Why would they? Back when it was first released I think it was the only way to use a real N64 controller on the PC. I remember even using it for the driving parts of Mafia! But now there are several options plus USB versions of the controller so while the Adaptoid may be rare it is no longer desirable.

In my experience, most of those USB controllers are crap. Lightweight, mushy buttons, terrible d-pads...it’s just not worth it when you can typically get an adapter.

There are exceptions, of course. 8bitdo and Retro-Bit usually make some pretty good controllers. But they don’t have N64 controllers.
Top 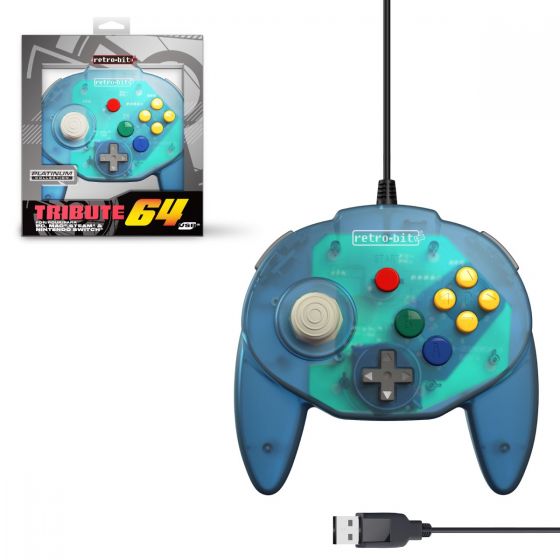 And there's this one, which is a bit different and not perfect: 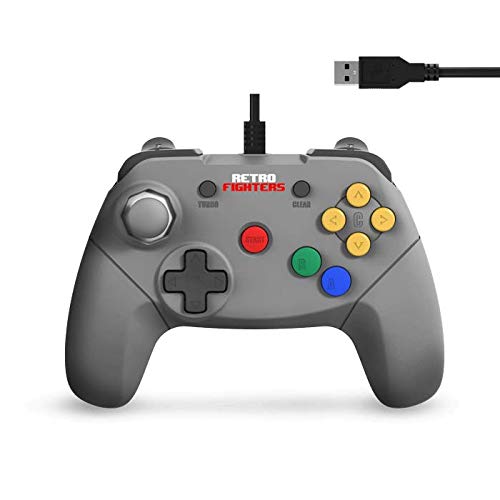 I've learned that if a USB controller is less than $20 at regular price, it's a budget pad and it isn't going to be great. I've bought SNES and N64-style controllers from Microcenter for $10-20 a pop, which is super cheap but they are what you pay for. Like melan said, the buttons are soft on the SNES pad, the d-pad is a mess, and the N64 analog stick is on par for a Walmart floor demo. They work, but really feel like the old 3rd-party controllers saved for little brothers.

I'd totally endorse 8bitdo controllers, I have a SN30 Pro and SN30 Pro+ and both are top tier. Sturdy design, great buttons and works with everything from the Switch and retro mini consoles to Windows 10. I started with the Pro, but now I prefer the Pro+ with the grips. I wouldn't have bought the Pro had I known how much I like the Pro+, but both are great. 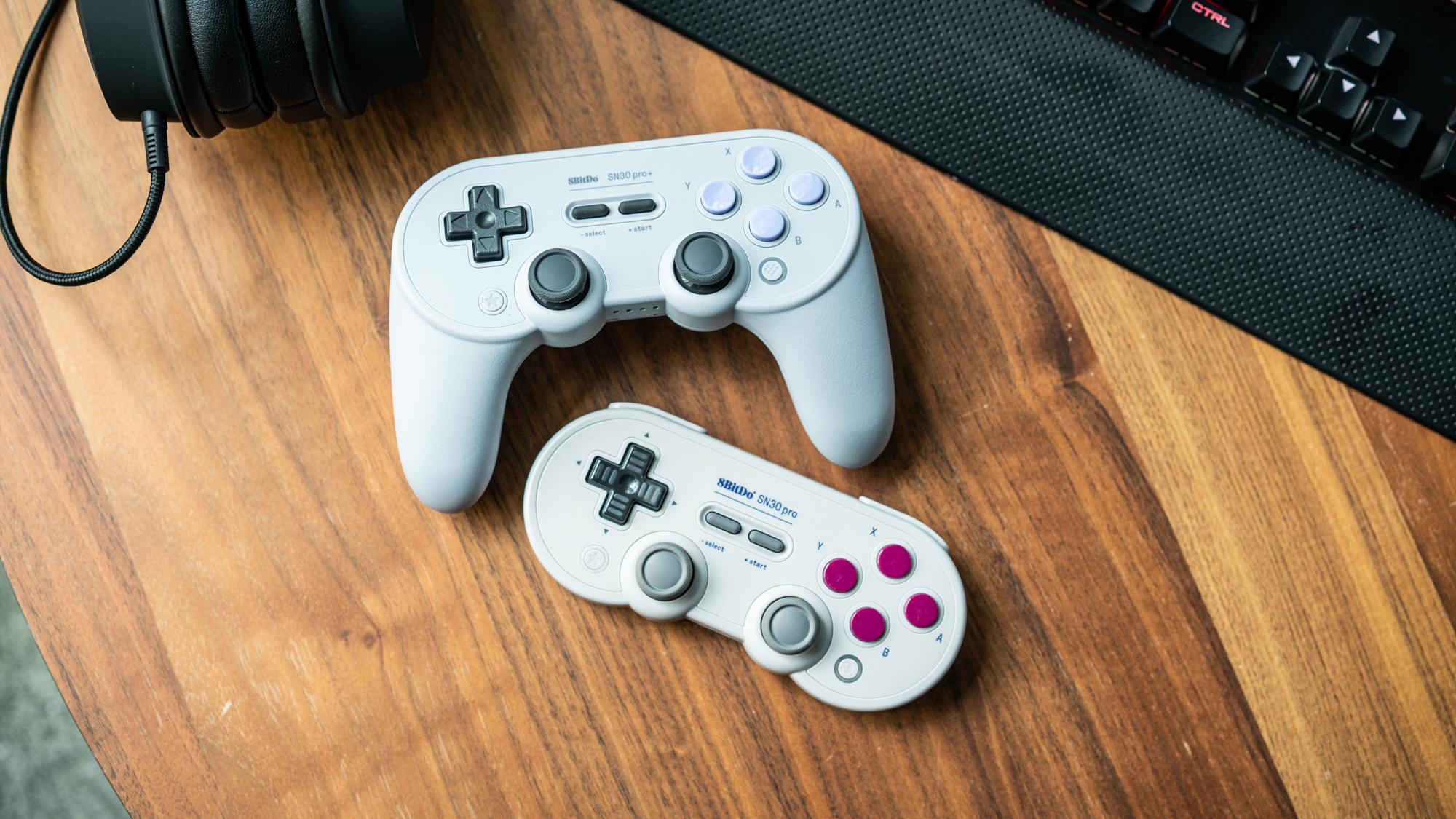 I also like the flexibility of playing wired vs. wireless with the 8bitdo pads. They work over Bluetooth, so their company's wireless dongle is optional but is nice for consoles. Best Buy used to have the Pro+ in stock, looks like they still have some Pro.

I don't have any Retro Bit controllers, but they've got a great reputation with their Mega Drive/Genesis and Saturn pads.
Top

Zoidberg I've saw those 2 pads before but I want the original design.


melancholy wrote: ↑
Sun May 17, 2020 11:26 pm
In my experience, most of those USB controllers are crap. Lightweight, mushy buttons, terrible d-pads...it’s just not worth it when you can typically get an adapter.

I'm kind of expecting it to be like that bu then again the reviews on Amazon for it were pretty good. The adapter route would probably be the best way to go but I really didn't want to spend much on it since it isn't something I'll be using all the time. I just want to play a few games with the original controller just for the hell of it since it has been so long since I've used one.


pixel wrote: ↑
Mon May 18, 2020 2:15 am
I've learned that if a USB controller is less than $20 at regular price, it's a budget pad and it isn't going to be great. I've bought SNES and N64-style controllers from Microcenter for $10-20 a pop, which is super cheap but they are what you pay for. Like melan said, the buttons are soft on the SNES pad, the d-pad is a mess, and the N64 analog stick is on par for a Walmart floor demo. They work, but really feel like the old 3rd-party controllers saved for little brothers.

I'll post a review of it in this thread when it comes in.

Calavera wrote: ↑
Mon May 18, 2020 2:29 am
The N64 controller is probably the same one I bought. I doubt they make several different models of cheap Chinese N64 controllers.

I'll post a review of it in this thread when it comes in.

It's hard to peak through the veil of the Chinese manufacturing megaplex, so who knows about the supply chain details. I searched the SKU listed on eBay, and other eBay listings say the controller was manufactured by a company called Mars Devices. The only information I can find about them is a products page that has a bunch of NES parts listed.

It looks like Retrolink still makes the controllers sold at Microcenter. I bought one of these controllers back in 2012-13 and it didn't work very well (analog stick drift, sticky buttons). I remember reading about similar problems in the reviews back then, too.

But now when I look up Retrolink controllers on Amazon? Reviews are still mixed but lean more positive than they used to. Astroturf comments might make up a sizable portion of those 5 star reviews, but I also think that build quality has been getting better over the years. Quality control still seems to be the biggest problem. If the manufacturing is done right with quality parts, these USB controllers should work fine. But my suspicion is that the rubber contacts are breaking or the analog stick mechanics aren't sound, leading to issues.

That said, I like rolling the dice on something that's less that $20. I'd like a good N64 controller because it's so unique to anything else.
Top

I've got an anonymous Chinese NES USB controller that's garbage and an 8bitdo SNES controller that looks and feels exactly like the real thing. It's great for 8 and 16 bit games but for anything more recent, I like an Xbox controller.
Top

Xbox 360 or xbone for anything that doesn’t use the D-Pad for primary controls.

Keyboard for anything that does.

One day I’ll look at a retro USB controller, but it’s a case of I need to try before I buy.
Any variance of Nintendo’s D-pad formula Nes to N64 is a complete waste of fucking time, and you may as well not put a D-Pad on the controller.

It hasn’t been a huge issue as I TYPICALLY like to play on original hardware, so cheap USB pads haven’t ever been needed.
(I’m going through the Ps1 atm, specifically Overboard! right now and the Ps1 dpad is actually worse than I remember it being)
Hank Azaria not playing Apu on the Simpsons will make the role as irrelevant as the Simpsons has been as a series since 1999!
Top
Post Reply
8 posts • Page 1 of 1