The National Wrestling Alliance (NWA) may have new ownership but it still holds respect for heritage. Take the NWA World Championship, it is revered as it should be. Ten Pounds of Gold started as a series of videos with then champion Tim Storm. The series was intended to educate newer fans of the heritage of the title and the man holding it. The series was meant to elevate the title, promotion, and those pursuing the title to a revered level. Now RetroMania Wrestling, by Retrosoft Studios, is continuing that reverence.

Announced earlier today, the Ten Pounds of Gold mode is being added to RetroMania Wrestling. It is still scheduled to launch later this year on PlayStation 4, Xbox One, Nintendo Switch, and Steam for Windows.

Announcements like this are what helps build excitement and interest in titles. Especially titles that do not have tons of marketing power behind them.

In Ten Pounds of Gold mode Nick Aldis is the reigning National Wrestling Alliance champion. Reaching the mountaintop allows that athlete to be the next reigning NWA World Championship. Retrosoft Studios specifically mention WCW/NOW Revenge as a reference for fans. Interesting. 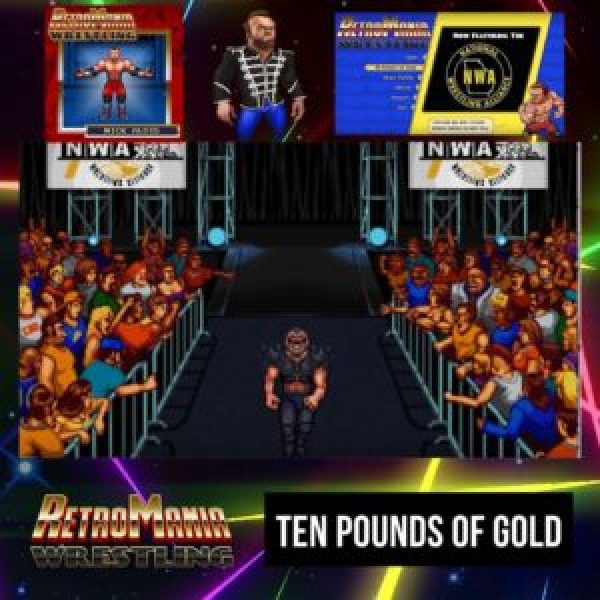 It is no secret that WWE 2K20 is less than stellar. What are wrestling fans to do? Sure, there is allegedly an All Elite Wrestling (AEW) game coming (anyone seen pics of it?). There is also the venerable Fire Pro Wrestling franchise but that is more simulation.

RetroMania Wrestling is the direct sequel of Wrestlefest from 1991. Continuing the action fans remember from that game is key. Pick up and play controls, modes that are fun and interesting matter. Then there are the many new athletes, arenas, modes, etc. There are even plans to have a Create-A-Wrestler mode available, all depending on success leading of the game. Want it? Support it. Simple.

Want to get in on the fun? Pre-order your copy of RetroMania Wrestling on Nintendo Switch and Steam. Xbox One and PlayStation 4 fans, you will have to wait for the release due to how those digital stores operate. For more wrestling game coverage check out our coverage here and on our sister site, Retro Gaming Magazine for older games.

You could have played as Happy Console Gamer!
Top

There's potential for a a lot of 2 on 1 handicap death matches...

Fans should expect “a significant evolution”

2K’s new WWE games boss has said his development team is looking at past classics such as No Mercy and Smackdown as inspiration for their next game.

Former Double Helix studio head Patrick Gilmore was deployed as the new WWE2K lead earlier this year, as the game franchise attempts to enact a “renewed focus” on quality.

In April, 2K confirmed earlier reports that plans for WWE 2K21 had been cancelled, following a challenging 2020 game.

WWE 2K20 was a disappointing full debut for developer Visual Concepts, resulting in one of the lowest Metacritic scores in 2K’s history, mostly due to a huge number of technical issues at release.

Participating in a Reddit Q&A this weekend, 2K’s Gilmore revealed the first details of his plans for 2021’s WWE game and told fans to expect “a significant evolution in gameplay with the next instalment.”

“Core gameplay is one of the major investments we’re making in the next instalment—one of six pillars we are focused on disproportionately in development,” he wrote.

“We are looking at much-loved previous games like No Mercy or Smackdown: Here Comes the Pain, along with top franchise instalments, and more modern wrestling and fighting games to build an all-new philosophical foundation for the game.”

However, the WWE games boss added that fans expecting 2K22 to wholesale adopt a control scheme or philosophy from one of their favourite games would likely to be disappointed. “We are trying to combine the best ideas out there into a brand new wrestling experience that sets a new standard,” he said.

Gilmore claimed that WWE 2K22’s gameplay would be focused on “Accessibility, Depth and Wrestling Experience.”

“For Accessibility, we’re obsessed with a simple, intuitive interface which has meaning and depth in a wide variety of contexts—i.e. the game is a lot smarter about what the player is trying to do given a gameplay situation (in a grapple, on the ropes, against a turnbuckle, etc.), with consistent inputs regardless of situation,” he explained.

“New players should be able to accidentally pull off awesome moves just by playing with and experimenting with controls.”

The exec said 2K22’s depth would not come solely from the manual skill of pressing the correct buttons, but from “the psychological game of anticipating and countering your opponent’s strategy.”

One of the huge challenges of the franchise is finding ways for players to feel in control of the vast number of potential outcomes in a given match,” he said.

“While we take lessons from fighting games, action RPG’s and other genres, this aspect helps us stay focused on delivering a through-and-through wrestling game.

“While we’re determined to deliver the spectacle and specific moments of a genuine match, I can say we’re trying to get away form UI popups or mini games to represent things like pins or reversals, and instead move those concepts into more fully-realized mechanics which feel like extensions of the main experience.”

The WWE 2K22 boss also confirmed that Create was another area of focus, and that the development team was looking at “streamlining interfaces and improving the experience for power users.”

“We’re also upgrading base models and trying to bring more personality and flow to the creation process,” he said.

WWE’s previous developer Yuke’s revealed in a VGC interview last year that it was working on a new, original wrestling IP to rival WWE 2K.

Featuring over 70 WWE Superstars and Legends, WWE 2K Battlegrounds is an all-new, over-the-top, multiplayer arcade experience featuring interactive environments and devastating power-ups.
Battle your friends online or on the couch in loads of match types, including the new King of the Battleground and online tournaments.

Undertaker is chokeslamming Strauman with a bit of his brother's demonic power I see.
Top 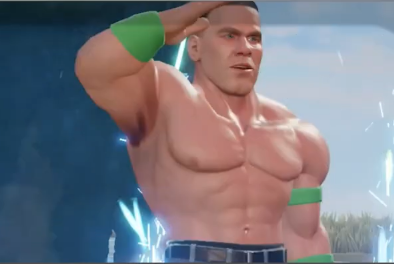 I saw this the other week, they're not evening trying to hide it

I bought TEW 2020 last week. It's taken a little while to get used to everything but now that I have I'm starting to get addicted to it.

I'm playing the Monday Night War mod as WCW. Had a Saturday Night show, that was taped on a Wednesday night, which was full of Horsemen stuff, interviews & matches. Arn & Tully wrestled the American Males and won. This was the news the next day:

So Arn went back to his hotel and fell into a woodchipper. What the fuck! Was it Sid's woodchipper?
Top

How much was it?
Top

A bit pricey for an indie game but I'm going to get my money's worth out of it, easily.