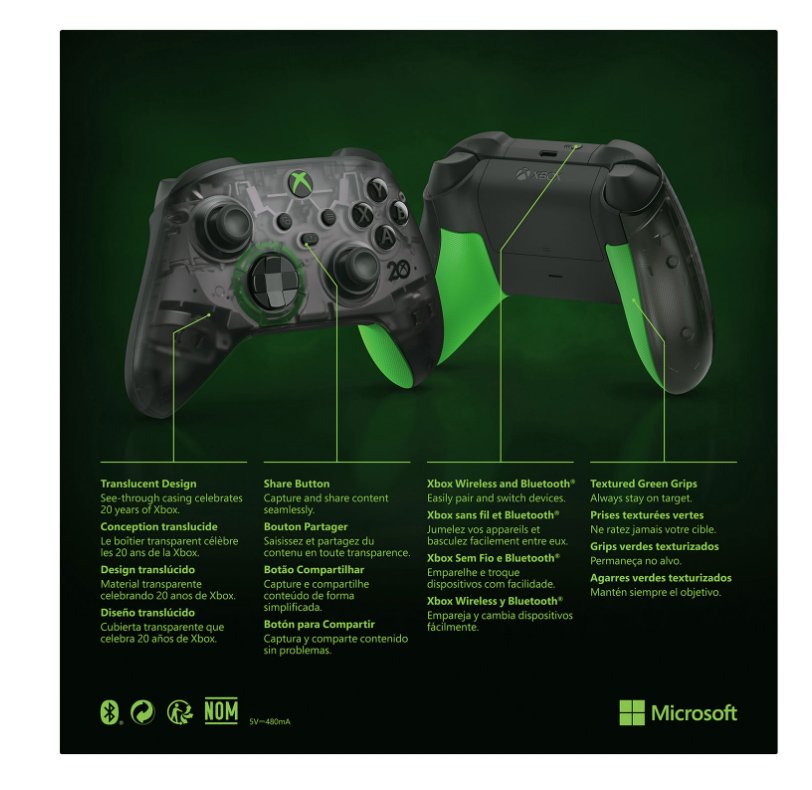 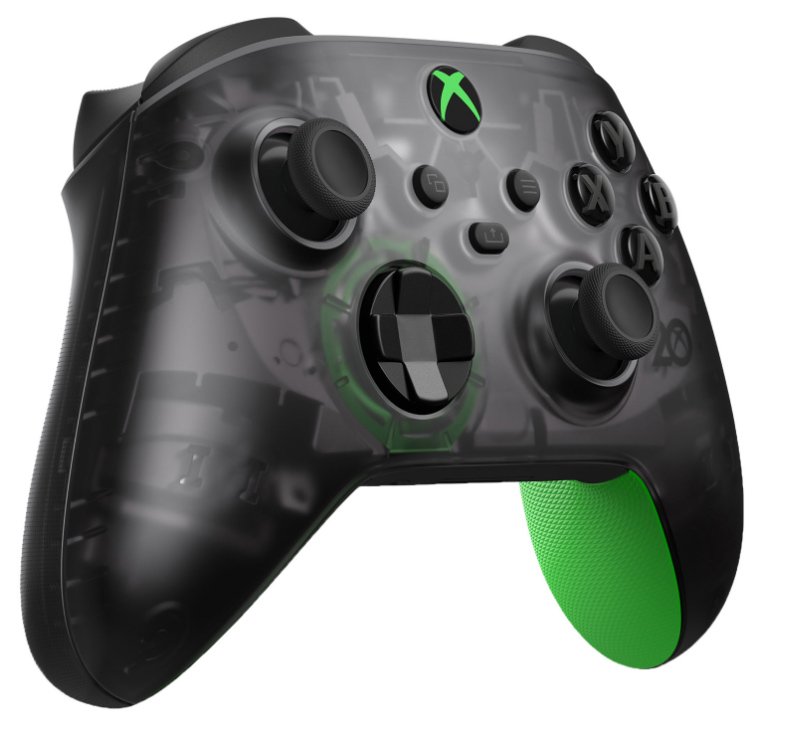 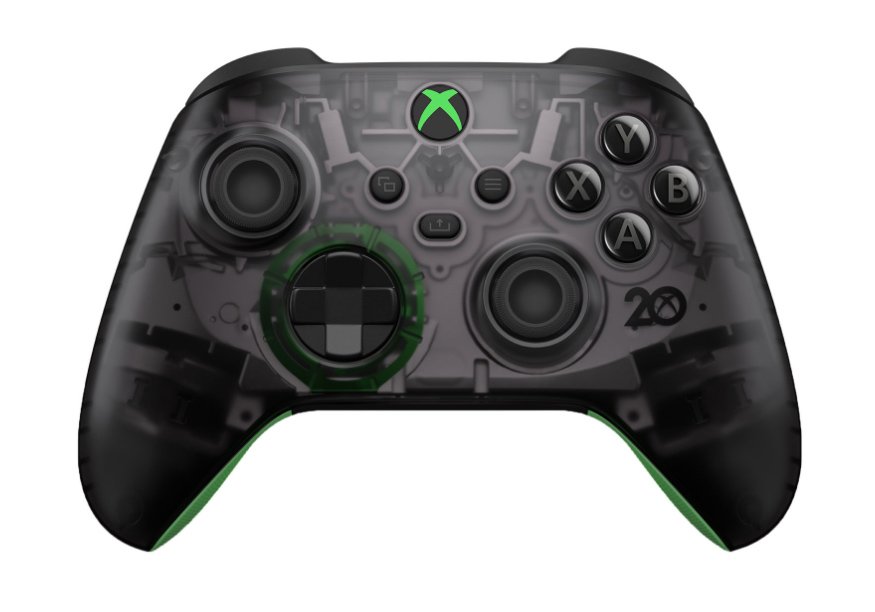 Well crap. Now I have to decide if I want to cancel my Forza controller preorder to get this instead. They are both awesome.
Top

But damn, yes that's a hard argument between the 20th anniversary and Forza controllers
Top

I admittedly don’t need a new one either, but I was looking for an excuse to upgrade my PC Xbox One controller with a Series style controller, and that Forza one definitely caught my eye when it was announced.
Top

I was thinking about the Forza one too, then I come here this morning and see this beauty...
FUCK THE FORZA CONTROL!!!

I don't even have a series XS and don't want one in the future, and still happy with my 2 xbone pads and my 360 pads for PC.
BUT I want this controller... I have never wanted a controller this bad, but it just looks magnificently stunning, and then its translucent as well and adds to the cool, as an aside I guess it commemorates 20 years of Xbox, but who even cares about that once you see this gorgeous triumph of perfect looks.

This makes the previously alright looking Forza control look like a garish abortion conceived by a coulourblind toddler on a raspberry cordial high...
If I should Die Hard Arcade before I Alan Wake.
PREY the Lords of Lore my Soul Calibur to Take-Two Interactive.
Top

Thanks Ian. You’re unfiltered opinion has once again helped me make a decision.

Right, I’m going with the Forza one. But not as a ‘screw you’ to Ian. No. In a world where damn near every console eventually has a ‘magnificently stunning’ black-on-black-with-color-accents controller, I want to be the guy with the controller that makes you feel like a ‘toddler on a raspberry cordial high.’ Screw having people look at the controller you brought and say, ‘wow that’s nice.’ I want people to say, ‘WTF is that‽’
Top

melancholy wrote: ↑
Fri Oct 08, 2021 9:40 am
Thanks Ian. You’re unfiltered opinion has once again helped me make a decision.

Right, I’m going with the Forza one. But not as a ‘screw you’ to Ian. No. In a world where damn near every console eventually has a ‘magnificently stunning’ black-on-black-with-color-accents controller, I want to be the guy with the controller that makes you feel like a ‘toddler on a raspberry cordial high.’ Screw having people look at the controller you brought and say, ‘wow that’s nice.’ I want people to say, ‘WTF is that‽’

You've always been an artistically inclined person, though. I'm boring with no sense of creativity or artistical inclinations. I might as well be a robot with most of my purchasing decisions. And the clean, sterile black lines of the 20th controller appeal much more to my sensibilities, and will match most of the other stuff I own.
Not to mention my favourite colour is green.

When I first saw the forza one I was on the fence, I actually liked it. But didn't know if I wanted to pay $100 considering I don't even have plans to get a series X (I was going to get one for Horizon 5, but then found out my Xbone will play it, so no need to upgrade) but I will pick up one of these anniversary ones, if they haven't pre sold out to all the scalpers yet.

I think the difference between the Forza one is it is LIMITED, and the anniversary one is SPECIAL... So there will be no shortage of the 20th controls.
in 10,20,30 years time, it wouldn't surprise me to see the Forza control worth many, many magnitudes more than the anniversary one (If you buy games for that reason)
If I should Die Hard Arcade before I Alan Wake.
PREY the Lords of Lore my Soul Calibur to Take-Two Interactive.
Top

Subscriber growth for Microsoft’s signature gaming service, Xbox Game Pass, was slower than the company hoped for in the past year, according to a new financial filing.

Why it matters: Xbox Game Pass is often touted as the best deal in gaming and its subscriber count is a shorthand measure of Microsoft’s gaming success.

By the numbers: For the 12 months that ended on June 30, Xbox Game Pass subscriber growth was up 37%, but the company had set a 48% growth goal.

For those who just want to see actual subscriber counts, that’s the catch. Microsoft hasn’t been sharing them lately.

- The most recent confirmed figure is 18 million, as of January.
- The service costs $10/month for console or PC players, or $15/month for a combo.

Between the lines: While it’s notable that Microsoft missed one target, it's also of interest that Game Pass subs are a target at all.

- In 2019, the company added Game Pass subscriber growth to a short list of performance goals for top executives, including CEO Satya Nadella.
- It’s the only pure gaming metric listed in the execs’ payment plan, and sits alongside other priority targets including a number of LinkedIn sessions and usage of Microsoft Teams.
- Reaching certain targets over the course of three years pays out more stock to those executives.

The big picture: Game Pass is core to Microsoft’s model of gaming’s future, one in which players subscribe to the all-you-can-play service and play its games on Xbox consoles, PCs, phones and, eventually, smart TVs, via streaming if necessary.

- Xbox management has spent the last couple of years flooding Game Pass with a remarkable array of high-quality games, including its own marquee releases and lots of excellent indies.
- Just today it announced 11 more notable releases for the service for this month alone.
- But if Microsoft is struggling to get Game Pass where it wants, it will have a strong sales hook 13 months from now with the release of Bethesda's highly anticipated exclusive “Starfield.”

Nvidia is unlocking access to its GeForce Now streaming service on Microsoft Edge today, allowing Xbox owners to play Steam PC games on their consoles. GeForce Now includes access to more than 1,000 PC games, and Nvidia has finally started supporting the Edge browser that now ships on Xbox in a beta update to GeForce Now today.

It brings the dream of playing PC games on an Xbox a step closer to reality, as the result is easy access to stream PC games to an Xbox. As the base GeForce Now service is free, you can stream popular PC games like Counter-Strike: Global Offensive, DOTA 2, and League of Legends at 1080p for an hourlong session.

I’ve been able to do this in the past using Parsec, which is essentially a remote desktop app that lets you stream what’s on your PC to a browser. GeForce Now is a far better solution as it doesn’t rely on you having to own a PC that’s capable of running these games, and you just connect to the service through the browser and launch games.

What makes this all the more interesting is that the Edge browser on Xbox also supports mouse and keyboard input, so you can play certain games that don’t even have gamepad support. It’s not the most ideal experience on the Xbox right now because the virtual keyboard appears when you click and latency isn’t great for multiplayer games.

Microsoft’s head of Xbox, Phil Spencer, has recently committed to bringing full PC games to the Xbox through the company’s Xbox Cloud Gaming (xCloud) service. We still don’t know when those will eventually arrive, but GeForce Now in the browser is the best alternative until they do.

With Nvidia expanding GeForce Now to Edge and even adding an RTX 3080 tier, it would be great to see an official Xbox client for the service, and a way to play these PC games on PlayStation, too.