I've started watching the Monday Night Wars again and it got me thinking. What nowadays could AEW realistically do to really compete with WWE like WCW did. Back then they had some big established names who jumped ship like Hogan, Macho and Lex & then guys like Bruti, Nastys, Hacksaw etc who were established names too.

As arguably only really John Cena is the biggest name in the past 10-15 years who'd be the equivalent of Hulk, is there anyone else who'd have a similar impact if they went to AEW?. Because today you'd say Cena is synonymous with WWE as Hogan was back in the day.

Has the lack of star creation over the past 15-20+ years meant that WWE has essentially put a stop to any real boom period happening again because to the mainstream there isnt any established enough to attract their interest.

WCW I think had the huge benefit of the talent pool being so big back then that they could hire wrestlers who had established name value and who were part of the 80s boom period. Even if AEW did manage to sign John Cena I'm not sure if he'd have the same impact that Hulk Hogan did with WCW. Because the level of interest isn't there. If they keep beating NXT in the ratings should they go up against Raw to reignite the Monday Night Wars. But they don't want a repeat of what happened with TNA as that just fizzled out and was really just a one sided constant win for WWE each week.

I don't know if the ultimate goal for AEW is to directly compete or just be another choice, an alternative for wrestling fans. I do think if they catch on with a hot angle like WCW did with the nWo then they could definitely go up against WWE. They also have the benefit of seeing where WCW and Impact went wrong with competing with WWE and not emulate the same mistakes.
Top

CM Punk is the only one.
Top

It would never happen....

But Undertaker or Rock showing up on their TV would be a torpedo on the side of the good ship WWE.
Top

Yeah, the problem is all of the big names like Rock, Austin, Cena, Taker, Batista all have a huge amount of loyalty to Vince. So did Hogan and Savage but Vince made it known he wasn't going to pay Hogan sized deals anymore and he was pretty shitty to Randy. All Savage asked for was to put over Shawn Michaels at Survivor Series 1994 because he wanted to pass the torch, but Vince was a dick about it and called him too old. Which is ridiculous because Mach worked his ass off until 1999 when he started to deteriorate.

Plus Savage was only 42 in 1994. And think about all of the old guys they survive bringing out for big shows. Imagine Vince telling Rock he was too old to come back and wrestle Cena at 42.
Top

Thanks. I don't know if even CM Punk could be the catalyst for a next boom period. He'd be a big signing for either WWE or AEW but he's not the star the level Hulk and Macho were when they went to WCW and to wrestling fans that legitimised the company as being a serious competitor then.

Another issue is they went from PG to TV-14 with the Attitude Era and you can't really reinvent the wheel twice. I don't know if AEW will start to introduce more vignettes/promo segments because to a degree you do need them to get the audience invested in the wrestlers. Especially if they aren't already knowledge about who they are. Which and I forget who made the point on the MNW but they said most non fans equated Hogan with wrestling. Outside of say John Cena and Rocky most folks nowadays who arent fans don't really know today's wrestlers.

That factor is huge in terms of why ratings are down since the level of interest isn't there and no new stars outside of John Cena have been made. Say AEW started up when Vince bought WCW they could have brought in Goldberg, Hogan, Macho etc and you also had guys like Sabu, RVD etc so there was a lot of wrestlers out there who they could have easily replaced WCW and acquired a stacked roster. I believe Paul E was already with WWE but hiring him for creative and there's also the fact they could have had talent agreements with other promotions too.

But now I think it's just really the diehard fans who've stuck around. I'm assuming viewership wise the figures today are on par with the 1992-96 time frame.
Top

I'm not saying he's on their level as a draw, but to the fans that have stuck around, that still chant for him at WWE shows, he would be a huge deal. He'd be a bigger deal than Luger and Luger changed that landscape in 1995. But if he was coming I think he'd have signed by now.
Top

Jericho responded in the comments "Send us a tape and some pictures."
Top

Bandit wrote: ↑
Mon Oct 21, 2019 9:56 pm
I'm not saying he's on their level as a draw, but to the fans that have stuck around, that still chant for him at WWE shows, he would be a huge deal. He'd be a bigger deal than Luger and Luger changed that landscape in 1995. But if he was coming I think he'd have signed by now.

Yea that's true. My point was more so for AEW to really compete head to head with WWE they need someone with a lot of name value who could do the equivalent for them that Hulk did for WCW. With Punk he's still super over with the fans but is he a big enough name to draw in casual fans or even a non fan who might then stick around if they like what they see.

AEW have the benefit of knowing where WCW, ECW, TNA went wrong. But unlike WCW they don't really have that big a talent tool available since WWE have essentially signed all the big indie talent out there. That being said say once certain deals are up they could bring in some good signings. However they aren't at the same star level of what WCW had at the upper midcard/main event level.

AEW could quite easily create stars of their own and not need to talent scout the WWE for when deals are expiring. But they do need a compelling story arc where they get the audience invested in the wrestlers. Right now the matches themselves have been really good but for non fans it's the soap opera element that might draw them in. I would get away from making AEW another WWE lite but they need a certain element of using creative to build new stars. WWE hasn't done that for decades which is why the actual star power of the talent pool has dwindled.

MJF has a ton of potential and could be a legit star. They don't want to push him too heavily but if they put the belt on Cody, it would make sense for him to turn on him and challenge for the belt himself. It's something they shouldn't rush, more so MJFs jealously of Cody builds as the weeks go on and say they team together, then have him turn on Cody and want to challenge for the AEW World title. They don't run monthly PPVs so if its just four per year with Double or Nothing their WrestleMania equivalent you could easily have it be a slow burning angle which sees their first match there.

So far they seem to be pushing Riho, Dr Britt, Darby and Sammy the most. The Elite guys have almost taken a back seat but that could be so the fans don't think they're just pushing themselves. But when they have a tag team like Matt and Nick & a guy like Kenny on the roster it makes most logical sense to push them as the stars and build around them.

The 10 Pounds of Gold about Cody were very well done and got the fans to root for him to win the NWA World title so a similar angle where he wins the AEW title would be very good too. Then that could give them their Hogan joining the nWo type moment if you have MJF turning on Cody or even have Cody turn heel and be a similar character to MJF and have them feud with the Bucks & Kenny.

They just need something they are doing to spark interest outside of the wrestling bubble. Since TNT seem invested in AEW they could have MJF on Inside the NBA and start arguing with Shaq so they could get some mainstream publicity. It doesnt always work with a celebrity crossover but arguably WWF bringing in Mr T and Cyndi was a huge catalyst in the success of the first WrestleMania. Without them I don't know whether WWF would have caught the attention of non fans. Same with Iron Mike and Austin.

If AEW can create a similar buzz and then manage to keep the new fans on board then perhaps there could be a new boom period on the horizon. They would need a huge star to attract that level of attention the WWF did and also a big storyline to keep any non fans on board a d be invested in it. It might be the antithesis to what AEWs audience wants but to really grow the company and go up against WWE they need to make a huge powerplay and a statement of intent to say we mean business.
Top

Punk is closer to Hall and Nash than Hogan. Diesel and Razor Ramon weren't selling out the Silverdome, but them coming to WCW was over huge with existing fans and cool enough that the casuals decided to tune in to Nitro to see what the buzz was all about. So that could have happened if he went to AEW, he and Moxley would have been more their Hall and Nash than Hogan and Savage. Not doing the angle, but as a "hey these WWE guys I've heard of a few times are over here doing something cooler than WWE is now" to casuals.
Top

He says he'd still work for them but stands by what he said to ESPN about feeling used.
Top

Are they about to make out?
Top

Are they about to make out?

Think of it like a silent movie, Kennys "sad" that Seth is dissing AEW calling them the minors, then he thinks about the Seth/Bray crud that he could have been involved in and he's over the moon that he's not in WWE.

You wanna find out the dirt on Kenny O and The Man's Man, bro... 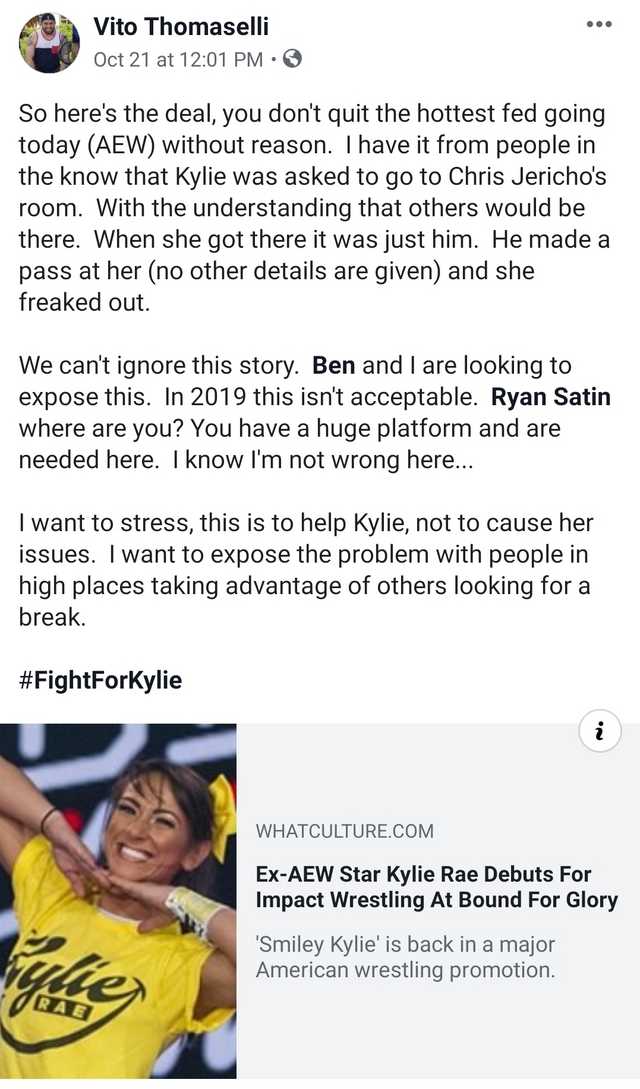