Now with an assist feature. 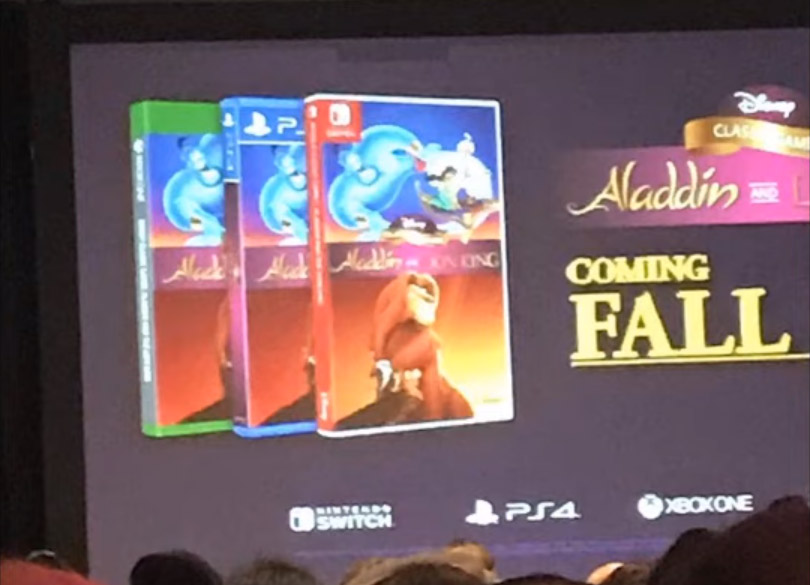 A remaster collection including the 1993-released Aladdin game and 1994-released The Lion King game, both originally developed by Virgin Interactive for Sega Genesis and Super Nintendo Entertainment System (The Lion King-only), will be available to pre-order for PlayStation 4, Xbox One, and Switch starting August 28 at GameStop and launch this fall, the retailer announced during a presentation at the 2019 GME Conference.

News of the announcement first surfaced via Twitter user @wolverinefactor, and was followed up by GameXplain with an off-screen image (above). A separate source has corroborated and supplied additional information to Gematsu.

Both Aladdin and The Lion King are reportedly playable in original and 1080p resolutions, and include their original soundtracks. New features include the ability to fast-forward and rewind to jump to any part of the game, as well as have the game itself take over to show the player how to clear the stage.

As this news was presented at the 2019 GME Conference, which is a GameStop exhibition, it is currently unknown whether the collection is also planned for PC. However, given that it will be available on all current consoles, it will likely also be available on PC.

We’ve learned a new indie studio has opened up, and it has some serious talent already.

The new studio, OnceLost Games, has been founded by the designers behind the original Elder Scrolls game, The Elder Scrolls: Arena. Unsurprisingly, their first game will also be an open-world RPG like their pedigree.

While details are scant, the above piece of concept art is prominently displayed on their studio’s home page, with the following caption: “High contrast image of Excalibur, sword in the stone with light rays and dust specs in a dark cave.”

Their actual description for the game is that it will be a “massive open-world fantasy adventure” and that it will “boast revolutionary technology and game design.” Could their first game be one based on the classic Arthurian legends? Only time will tell.

Is Gears 5 any good? I thought about buying it last night at Target but didnt.
Top

It's getting good reviews.

I've heard it's not as good as the first 3 games though.
Top

Meh. I loved the look of Okami, but the game itself sucked.
Top