Wednesday's Dynamite episode drew 928,000 viewers on TNT, topping the 770,000 viewers garnered by NXT on the USA Network by 21%, according to Showbuzz Daily.

-- Ratings are in for Wednesday's installment of the Wednesday Night Wars -- with AEW Dynamite taking the night with an average viewership of 817,000 to NXT's 757,000.

However, the Dynamite number was down 12 percent from last week while NXT dipped by just two percent.

The NXT demo number represents one of their best showings since their first few weeks, and the gap of 0.6 between the two was the closest the WWE property has been since December 18 when they beat Dynamite.

In most other categories, the shows were either tied or within 0.03 of each other.

Here's a look at the last 10 weeks of competition as well as the average in ratings and total viewership for both shows: 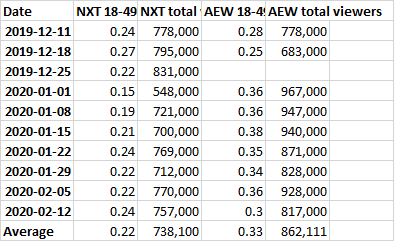 -- Raw increased eight percent from last week's low level with a show that did the best job of keeping the audience in a long time.

Raw averaged 2.34 million viewers, not far off the 2.40 million for the show the day after the Royal Rumble. But more important was the ratings pattern where for the first time since August 26, the audience grew in the second hour. This isn't unusual during daylight savings time but it is very unusual during standard time, particularly in the winter.

Raw was first in 18-49 and eighth overall on cable, trailing only news shows on Fox News and MSNBC.

The show was down five percent from the same week last year.

The real story was the growth of teenagers and over 50 in hour number two, which also was stable in 18-49.

In particular, the big winner was Angel Garza, whose match with Cedric Alexander was the high point of the show.

-- We were able to see a quarter-hour breakdown of last Friday’s edition of Friday Night SmackDown that featured Bill Goldberg’s appearance to challenge The Fiend for a Universal title match.

The show peaked in the first segment with the return of ‘The Dirt Sheet’ with The Miz and John Morrison, who was confronted by the New Day with an average of 2,657,000 viewers.

The next quarter dropped 29,000 viewers with Alexa Bliss and Nikki Cross backstage, a backstage segment with King Corbin, and Elias performing in the ring before the interruption by Sami Zayn and Cesaro.

The next quarter fell by 52,000 viewers for Bryan vs. Slater, the Braun Strowman interview with Renee Young followed by Zayn and Shinsuke Nakamura attacking Strowman and The Revival joining in.

The final quarter increased by 89,000 viewers for the conclusion of the women’s four-way match with Carmella over Alexa Bliss, Dana Brooke, and Naomi.

-- This week's episode of WWE Backstage drew the show's second-best viewership since it premiered in its regular time slot.

The Dog Show began at 7:30 p.m. Eastern time and ended when Backstage began.

CM Punk returned to the Backstage panel last night, making his fourth appearance as an analyst. The best viewership the show has averaged in its normal time slot remains the 180,000 viewers it did on November 19, where Punk officially debuted on Backstage after making a surprise appearance the previous week.

Charlotte Flair was the in-studio guest on Backstage last night.

Here's a look at Backstage's viewership since its official premiere:


Regarding U.K. ratings, they were expected to drop with the move from Sky to BT, which is in fewer homes. But the opposite has happened as BT has made promotion of WWE a priority, something Sky hasn’t done for years and the numbers are up from the past two or so years. For the week ending on 2/2, Raw did 75,800 viewers live, Smackdown did 111,000 viewers while NXT did 12,600 viewers. MLW on Freesports did 16,800 viewers that week. AEW on ITV did about 100,000 viewers this past week which is much lower than they started out at, which was nearly 300,000. The first week of Raw and Smackdown on TV 5 did 200,000 and 100,000 respectively. So the idea that AEW would dominate viewing numbers, which was the case when WWE was on Sky, is no longer the case with the WWE move to BT and the new deal with 5. However regarding overnight numbers for this past week, they listed AEW on ITV 4 at 45,000 for the first airing on 2/7, Impact of 5 Star did 59,000, Raw on BT on 2/3 did 4,000 and on 2/10 did 24,000. Smackdown didn’t even register the last two weeks (meaning in theory less than 1,000 viewers) this past week


-- Going against the Democratic presidential debate but no major sports competition, both AEW Dynamite and NXT were up in the ratings this week.

Dynamite averaged 893,000 viewers, up nine percent from last week. In the 18-49 demo, the show averaged a 0.31 rating, which was up three percent from the prior week. Dynamite finished fifth in the cable TV ratings in that category.

NXT was up five percent, averaging 794,000 viewers. In the 18-49 demo, it averaged a 0.25 rating, up four percent from last week. NXT finished 16th in the cable rankings, one of their better finishes in that category.

Aside from when the show ran unopposed on Christmas night, it was the highest viewership total for NXT since December 18.

The demos were different than usual this week as the shows tied in people over 50, a category NXT usually wins out in. NXT had a slight win in people 18-34, with a 0.19 rating to Dynamite's 0.18.

The debate likely hurt NXT more than AEW, given that the debate did a monster rating in people over 50, the category NXT usually wins in.

The only sports competition on the night was a college basketball game on ESPN that only aired against the second half of the wrestling shows and averaged 978,000 viewers.

Here's a look at the last 10 weeks of ratings and viewership totals for both Dynamite and NXT: 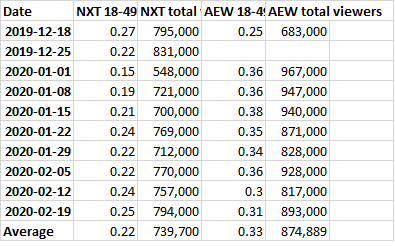 -- Raw on Monday night did its best showing since December 30 with a 2.44 million viewer average.

For whatever reason, there is a history of Raw doing big numbers on President's Day weekend, as last year's show did 2.77 million.

The number was up four percent from last week, but the bad news was that the 22 percent first-to-thurd hour drop in audience was the seventh biggest in the history of the show.

That was also a similar pattern to last year where the first two hours were much higher than usual and the third hour collapsed by 20 percent.

The second-to-third hour drop was the second largest of all-time, trailing only a 2018 episode that had Dwayne "The Rock" Johnson appearing at the end of the second hour.

This week's Raw was first for the night in 18-49 and sixth overall, trailing only news programs.

The first hour was the most-watched first hour of the show since September 30.