NASA's rover Perseverance is investigating signs of ancient life on Mars, and it has now collected some of the most promising samples from the Red Planet yet.

According to NASA, several rock samples containing organic matter were found in Jezero Crater, a 28-mile wide crater home to what scientists believe was once a river delta that formed about 3.5 billion years ago.

"Jezero was selected for this mission because ... it allows us to explore an ancient habitable environment, (and) it allows us to seek evidence of possible Martian life in rocks deposited at that time, about 3½ billion years ago," Perseverance project scientist Ken Farley said in a recorded panel briefing about the rover's findings.

"I want to emphasize: This mission is not looking for extant life, things that are alive today. Instead, we are looking into the very distant past, when Mars' climate was very different than it is today," Farley said. 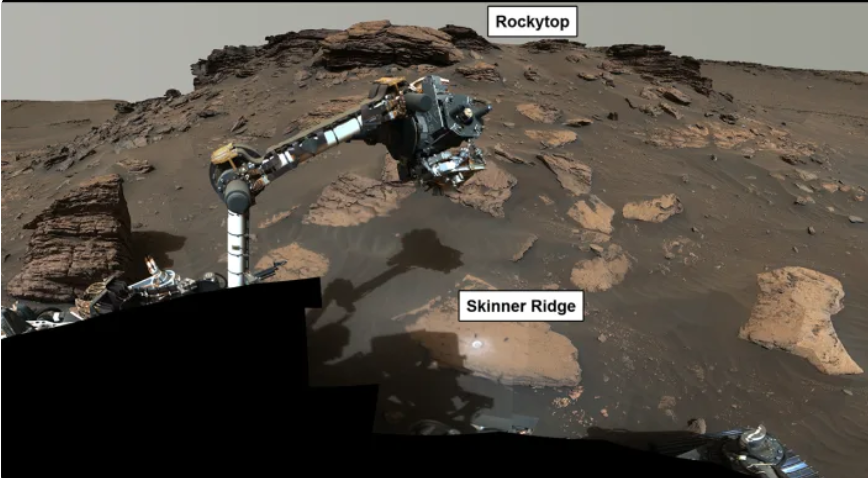 Perseverance launched in July 2020 and landed in Jezero Crater in February 2021. Since July 7, NASA says, the rover has collected four samples from the delta, bringing the total number of collected, "scientifically compelling rock samples" to 12.
[HEADING=1]Martian rocks with organic matter[/HEADING]
Perseverance is studying the delta's sedimentary rocks. The rover already has explored Jezero Crater's floor, finding igneous rocks. The contrast of the two "provides us with a rich understanding of the geologic history after the crater formed and a diverse sample suite," Farley said in a news release.

The project scientist pointed to one collected mudstone that contains "intriguing organic compounds."

With the help of an instrument called Scanning Habitable Environments with Raman & Luminescence for Organics & Chemicals, or SHERLOC, organic molecules were found in "Wildcat Ridge," a 3 foot-wide rock believed to have been formed by mud and fine sand in an evaporating saltwater lake billions of years ago.

"It's clear that we're uncovering a bigger story than what's happening in Jezero Crater. We found signals that we think are possibly from organic matter on every target that we've observed with SHERLOC to date," SHERLOC scientist Sunanda Sharma said in the panel briefing.

Sharma added that the finding wasn't "unexpected," because it aligns with previous research. "However, it does say that organics seem to persist in the very harsh Martian surface environment, which is very exciting for us."

According to NASA, Curiosity Mars rover found evidence of organic matter in rock-powder samples back in 2013. Perseverance has detected organics in Jezero Crater before, but the latest finding was in an area with conditions that would have allowed life to exist in the distant past, scientists say.

“The fact the organic matter was found in such a sedimentary rock – known for preserving fossils of ancient life here on Earth – is important," Farley said.

"However, as capable as our instruments aboard Perseverance are, further conclusions regarding what is contained in the Wildcat Ridge sample will have to wait until it’s returned to Earth for in-depth study as part of (NASA and European Space Agency's) Mars Sample Return campaign."

It is too bad we probably won't ever really know how things used to be on Mars. For all we know an advanced human civilization lived there for millions of years and eventually moved to earth once the planet became uninhabitable. They came to Earth built the pyramids and then some event happened that wiped most of them out and then the world basically started from scratch as far as technology. Just a wild guess but it would be so cool to know what used to be on Mars. If humans ever make it there hopefully we find some ruins or something under the surface. That would be amazing!

Mars has been uninhabitable for some three billion years. The earliest signs of humanity is less than one million years. Plus we have evidence of human ancestors proving that humans evolved on Earth.
Top
Post Reply
4 posts • Page 1 of 1