Actually the only things Cornette slated was the Joey Ryan stuff, and Jay Lethal, which I actually agree with him on.

Frank the Clown is a wrestler now?...

Yeah it's not the same thing. If he was going to do shows on people botching fairly common moves then that's all he would ever be talking about.
Top

Not really sure what the payoff was supposed to be here? Going on the "crowd" reaction, they didn't even flinch to a guy jumping from the top rope and smashing his face on to the floor. In comparison, the "intended" spot would have, got even less of a reaction, so...

Yea that's exactly Corny's point. Fans are accustomed to seeing high flying moves etc so really it needs to go full circle and focus more on the actual holds like wristlocks, head locks etc and put them over. You don't see UFC fighters jumping off the Octagon on top of each other, or Boxers jumping off the top rope and doing superman type punches. Wrestling needs believability and whilst I like the high flying moves they've been done too much so fans think "yawn...next". WWE and the other promoters need to build up the old school submission moves again like the Iron Claw, Full Nelson etc. It'll cut down on the injuries and concussions too.
Top

You need a mix. Like New Japan has a mix of everything and that's why they're the best right now. Will Ospreay does stuff that's unrealistic, but it's great so it's one of the best matches on their shows. But the whole card isn't Spanish Fly's and 450 splashes, they'll do two of those matches and 6 or 7 modern wrestling matches like from Kenny Omega, Tanahashi, Naito, Ishii, etc. Suzuki and Sabre especially get submissions over and work safe matches.

The thing is wrestling isn't MMA so you can't get a Cruiserweight/Junior Heavyweight over without high flying spots because that separates them from heavyweights. That's been wrestling since Tiger Mask and Dynamite Kid. Like you can have a Dean Malenko style small grappler, but then you also need Rey Mysterio, Juventud and Jericho style fast paced or high flying wrestlers.

I don't think the Iron Claw would ever get over again because it's too unrealistic to have a guy not trying to remove the hand of the opponent doing it to him. You're never going to go back to the 70s and 80s. If you want to see realistic grappling why would you watch a fake version when UFC is on TV every Saturday. People stick with wrestling for the dramatic matches like AJ Styles can give.
Top

Another thing is the number of false finishers. Jake talked about how his DDT was the finisher now it's just a part of most movesets. I do agree you need a mix of the high flying, mat based matches, brawling style etc. But it's the moves within the matches that need to be addressed. Majority are just throw away, whereas back in the day, you had sleepers as finishers, bear hugs etc. Yea it's retro and some date back to even the 40's or earlier but it's still wrestling most fans tune in for.

So you need to put over holds over again, like they've done with Ronda's armbar. Ive said this before but you need believability in wrestling and if you've got guts and girls doing moves with no rhyme or reason there's no point to them. Every move should count and mean something. Plus you need moves where if someone does kick out of them it's a big deal.

You don't need to cut out the highflying moves but make a 450 or frog splash or any move like that the show stopping finish. Like when AJ hit the Spinal Tap in TNA that was a big deal or a Styles Clash from the top rope. But if you're doing these moves multiple times a match then it gives fans no reason to care.

They try and throw too much in and it dilutes everything down. Plus whilst it's predetermined you have to have the suspension of belief. I don't believe the Newsletters have negatively affected that, it's the actual match content itself. A lot of fans were drawn into watching Hogan where it was him getting a bit of offence, the heel taking over and doing a number of him, then he hulks up, big boot, leg drop, 1-2-3. Real simple, but it worked. I think because of how open the business is now in breaking kayfabe it wouldn't fly today but if they had a more up to date format that would maybe draw more mainstream viewers in.

It's also missing how over the top it used to be. Even the announcers like Jesse had personality and were part of the show. Now it's generic and by the numbers. The product is stuck in a rut because it's too micromanaged and everyone has to stick to script. Allow the older established talent to adlib and have more personality. Someone like Enzo harked back to the 80s because he was so OTT and...he got over. Generic CAW type characters not even the diehard fans can get behind. So that aspect should be brought back. Give everyone a fun gimmick like back in the day and try to keep it kayfabe as much as possible.

Because you see guys like Braun or Dean go off yet on Ride Along, Table for 3 etc they are themselves. Plus keep a clear distinction between faces & heels and don't have them associate off career or at least on social media etc because it destroys everything you build up. UFC with their promo shows for big fights do a better job in 30 minutes than WWE do so take the best parts of what they do and adapt that to the wrestling format.

Like with Dean and Seth. No ones really into it as you know away from the camera they are buddies. But if you kept kayfabe and do some really good build up packages you could get the fans into it. I don't believe fans would turn against it as most want to suspend belief again and I imagine most old school fans watch mostly the older WWF, WCW, ECW etc on the Network anyway.
Top

Didn't Russo put out a restraining order on Cornete due to being in mortal fear of him? Also, he could have least used a photo of Cornette in the canary jacket.

Yes, when Kenny Bolin told him Cornette found his address and was either going to go there or have one of his fans go there he got one.
Top

And he's been selling copies of the restraining order on his site for a couple of years.
Top

Prichard just responded to shit that Russo wrote in his book. Usually Prichard is full of it, but Russo's book is actually ridiculous.

There's only really been Bischoff who's been slating him recently. 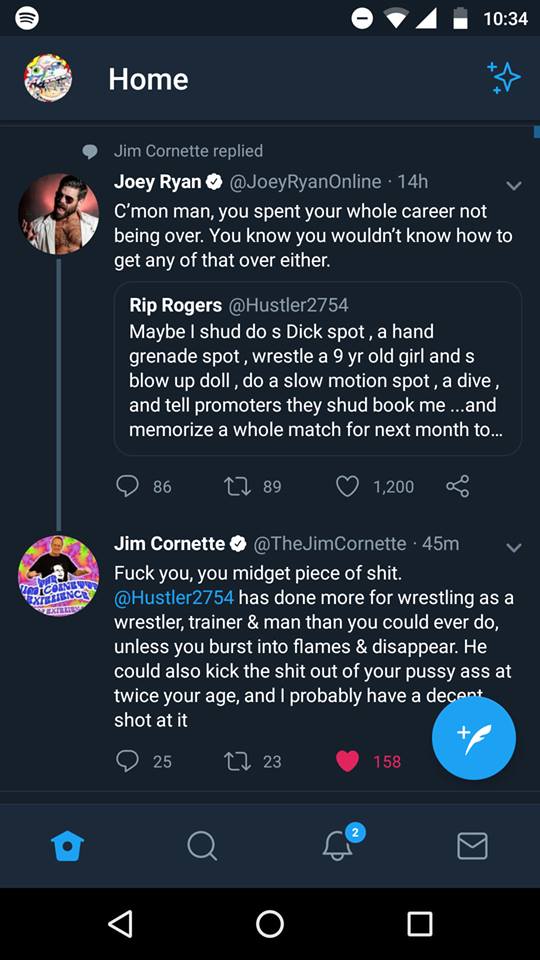