There is a slight chance the WWE might not exist by 2024 at least in its current form, and I am both elated and saddened.
Top

MEDIA
Vince McMahon is back at WWE to ensure a smooth sale process. Here’s who might want to buy it
PUBLISHED SAT, JAN 7 20237:00 AM ESTUPDATED 3 HOURS AGO
thumbnail
Alex Sherman
@SHERMAN4949
SHARE
Share Article via Facebook
Share Article via Twitter
Share Article via LinkedIn
Share Article via Email
KEY POINTS
Vince McMahon rejoined the WWE board Friday to begin a potential sale process for his company.
WWE has hired JPMorgan to advise on a sale, sources say.
Legacy media, streaming giants and entertainment holding companies could all end up submitting bids to buy WWE.
A deal would likely happen before mid-2023, when TV rights renewal deal negotiations will also take place.
In this article

The notion of WWE selling isn’t new. CNBC reported it looked like a sale target in April and that it appeared only more attractive in July after a sexual misconduct scandal. The rationale is fairly straightforward: WWE is valuable intellectual property.

Owning IP allows streaming services to exclusively offer content without the annoyance of winning licensing rights in an auction every few years. WWE also has value to offer in merchandising and theme park businesses.

WWE has hired JPMorgan to help the company advise on a potential sale, according to people familiar with the matter. JPMorgan declined to comment. A WWE spokesman couldn’t immediately be reached for comment.

If a deal occurs, it would likely occur in the next three to six months, said the people, who asked not to be named because the discussions are private. WWE plans to talk to potential buyers before it makes a decision on TV rights renewal agreements.

Facilitating a sale
McMahon’s return should help a sale process go smoothly, though there could still be hiccups.

The former CEO and chair is 77 years old and the controlling shareholder of WWE. He stepped down after an investigation found that he had paid nearly $15 million to four women over 16 years to quell claims of alleged sexual misconduct and infidelity. Returning to the board will give potential buyers confidence he’s supportive of the details of any transaction.

“My return will allow WWE, as well as any transaction counterparties, to engage in these processes knowing they will have the support of the controlling shareholder,” McMahon said in a statement Thursday.

McMahon’s return doesn’t affect current leadership. McMahon’s daughter, Stephanie, and former CAA agent Nick Khan are co-CEOs. But it remains unclear what type of role, if any, McMahon would want at WWE if he sold the company. WWE has told investors that McMahon’s role at the company is essential in “our ability to create popular characters and creative storylines.” Currently, McMahon doesn’t have a formal say in the company’s creative direction.

WWE has a market capitalization of more than $6 billion after rising nearly 17% percent on Friday, buoyed by heightened sale speculation.

There are three categories of likely buyers for WWE — the legacy media companies, the streamers and the entertainment holding companies. Here’s who might be interested.

Comcast
Comcast
, which owns NBCUniversal, is a potential fit as a buyer for WWE. McMahon’s company already has an exclusive streaming deal with Comcast’s streaming service, Peacock, and a cable TV deal with NBCUniversal’s USA Network. Comcast has a market capitalization of more than $160 billion and can easily afford the company — especially with a $9 billion (or more) check coming as soon as January 2024 from Disney for a 33% stake in Hulu.

Comcast can lock up WWE in perpetuity without having to pay upcoming rights renewal increases and can use the company’s IP for theme parks, movies and other spinoff series.

Still, Comcast CEO Brian Roberts said in October “the bar is the highest it’s been in terms of M&A” and has repeatedly said the company isn’t in a rush to pursue an acquisition.

Fox
Fox
seems less likely than Comcast to pull off a deal for WWE given its significantly smaller balance sheet (and its $17 billion market valuation), its ongoing dalliance with recombining with News Corp., and its lack of presence in the global streaming wars.

Still, Fox also has an existing linear TV deal with WWE for Friday Night Smackdown, and the company may feel the time is right to increase scale given its News Corp. merger ambitions. Fox sold off most of its entertainment assets in its $71 billion sale to Disney in 2019, but WWE fits with the smaller company’s sports and live events focus.

Disney
Returning CEO Bob Iger may want to make a splashy acquisition as he retakes the throne at Disney
. WWE fits Disney in the same ways that it fits Comcast. It would bolster Disney’s streaming ambitions (perhaps ESPN+), it would support the linear network business, and it would add some heft to merchandizing and theme park businesses.

Comcast didn’t want Disney walking away with Fox in 2019 and drove up the price by tens of billions by topping Iger’s initial bid. Could Iger see WWE as the next IP battle between Disney and his rival Comcast?

Still, Zaslav has said both publicly and privately that while he’s not interested in renting sports rights, he would be interested in deals that give the company ownership over IP. WWE is one of only a small handful of assets that fit this premise. Rival wrestling league AEW currently has a traditional carriage rights deal with Warner Bros. that expires this year.

Netflix
Netflix
has long shied away from sports and other live events, but it’s recently become open to the idea of owning a league outright or taking an ownership stake. Owning a sports league would give Netflix the ability to create video games and spinoff series without friction. Netflix found success in its Formula 1 “Drive to Survive” documentary series, giving co-CEO Reed Hastings faith that certain sports properties will resonate with Netflix’s huge global audience. But Netflix doesn’t own Formula 1, limiting its future options.

Acquiring WWE or another sports league would be a path toward offering live entertainment without renting content — similar to Zaslav’s thinking.

Amazon
Amazon is perennially around the hoop when it comes to acquiring sports content, from spending $1 billion per year on Thursday Night Football to streaming Major League Baseball games to exclusively broadcasting a bunch of Premiere League soccer games.

Unlike Apple
, which is also interested in sports rights but has almost no history of doing multibillion acquisitions, Amazon spent $8.45 billion on MGM and $13.7 billion for Whole Foods. That suggests the company has the DNA to buy big.

Endeavor Group Holdings
Endeavor
, run by superagent Ari Emanuel, could add WWE to its stable of assets after agreeing to buy 100% of UFC in 2021.

Emanuel bought UFC to increase the scope of the talent agency’s business to live events. WME-IMG, now just a part of Endeavor, represents many UFC athletes — as well as WWE superstars. The UFC deal has been a success for Endeavor, which paid about seven times 2016′s $600 million revenue in 2016. UFC generated more than $1 billion in revenue in 2022.

Selling to a third party would also allow WWE to increase rights renewals every few years. That may or may not be a positive for the long-term future of the company as the media distribution ecosystem changes.

Malone and Maffei have extensive track records at maximizing media valuations and acquiring media assets for less than $10 billion, including Formula 1, Sirius XM and Pandora. The global success of Formula 1 could provide a roadmap for a future WWE strategy. 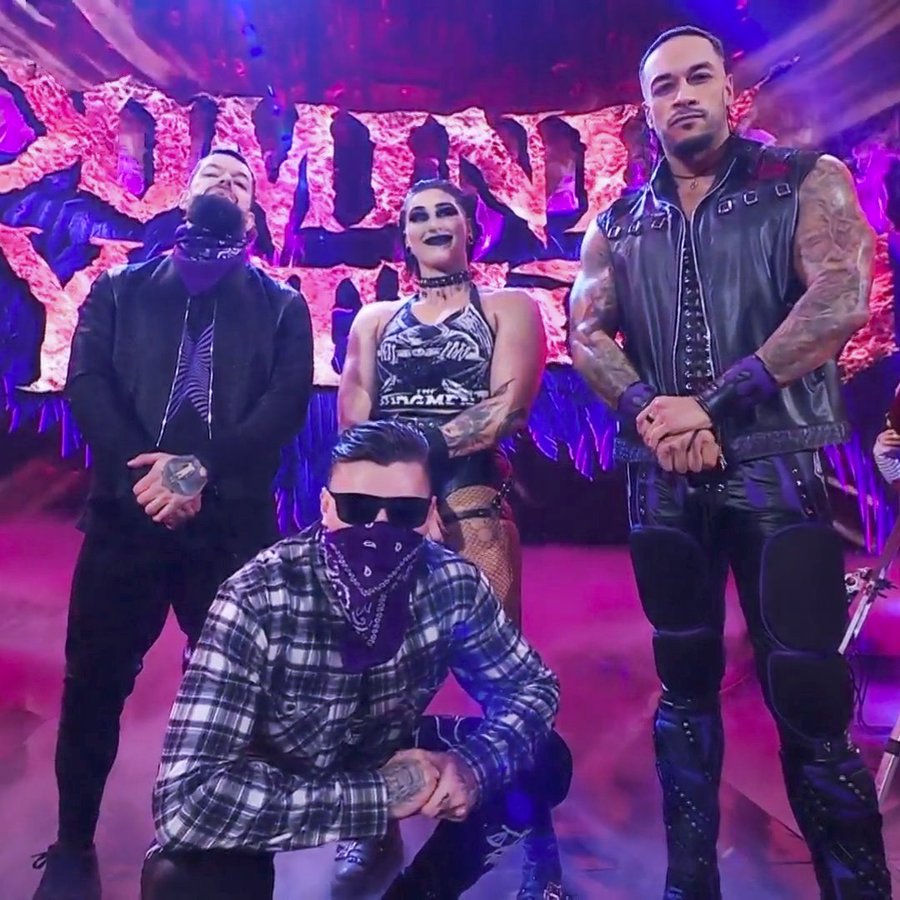 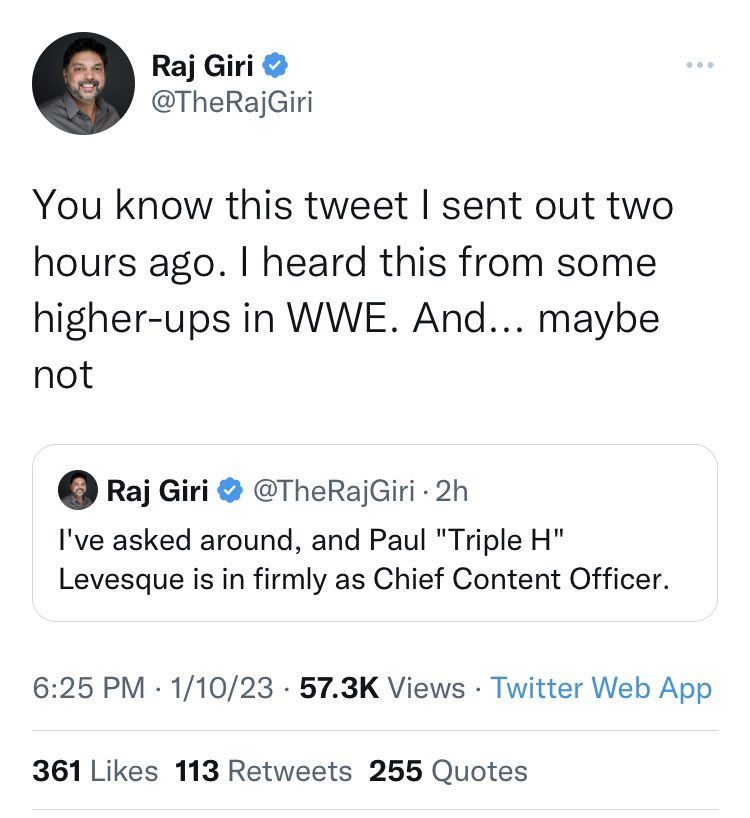 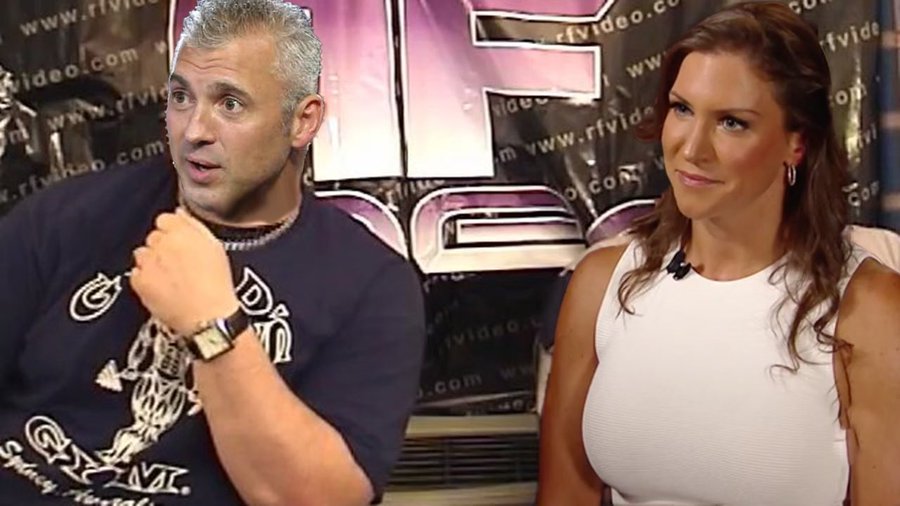 "Welcome to another RF shoot. Today with have two legends in the world of sports entertainment..."
Top

Current Twitter rumours: The Saudis now own WWE and are taking the company private.
Top 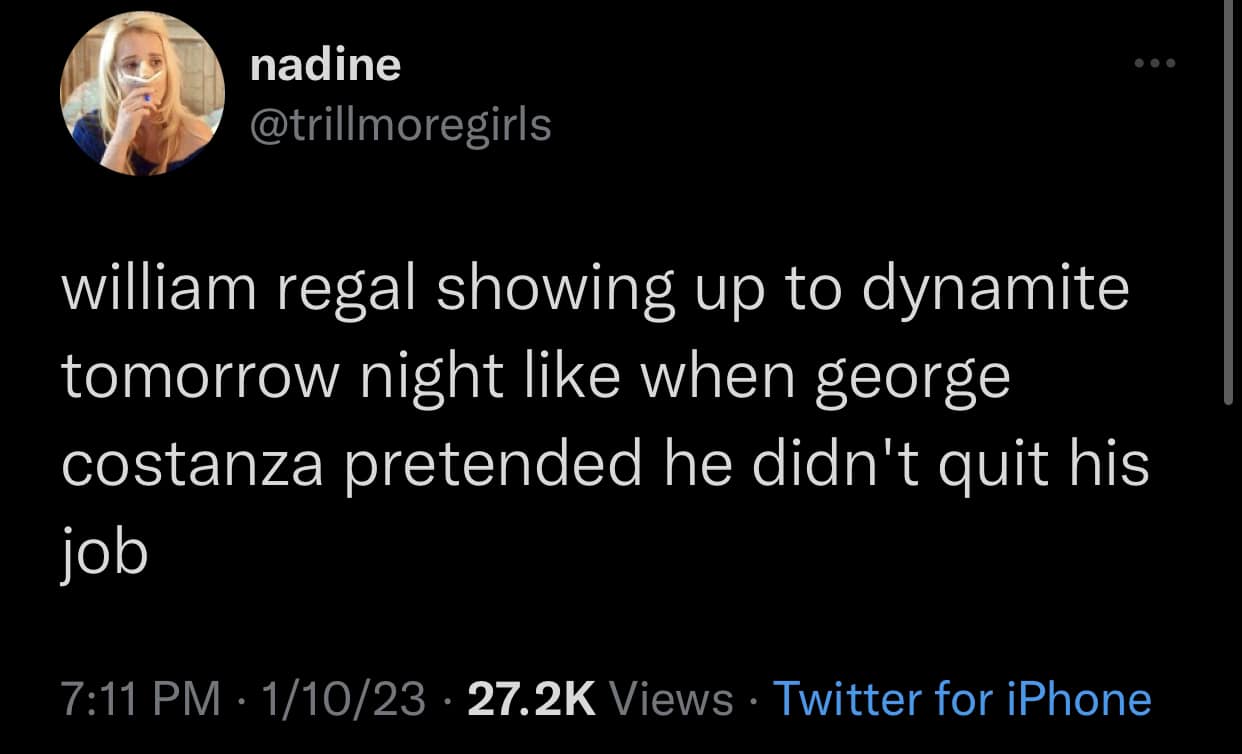