A thread for all the different Star Wars games.

'No microtransactions' but kow will EA ever survivie without then? (disturbingly close to actual EA thought process I fear)
Top

Some of you may have noticed a new title update being downloaded for Star Wars Jedi: Fallen Order™. Below you will find the release notes for this update, which improves backwards compatibility performance specifically on the latest generation of consoles.

Framerate has been increased to 60 FPS (up from 45 FPS)

As always, we appreciate your feedback. Should you run into any issues, please let us know!

The Disney-owned company just announced a new Star Wars title coming from Ubisoft and an Indiana Jones game from Bethesda. And that's just the beginning.

Today, Lucasfilm Games announced that it’s entering a partnership with Ubisoft to create an open-world Star Wars game. The title will be developed by Ubisoft’s Massive Entertainment, marking the first time that a company outside of EA has produced a Star Wars game since Disney acquired Lucasfilm in 2012, ending nearly eight years of exclusivity. Also in the works is a new Indiana Jones game, to be developed by Bethesda Game Studios, a newcomer to Lucasfilm’s and Disney’s properties.

Let’s start with Star Wars. Development on this new title is still very early—Massive is still recruiting for the project even—so details are sparse. Julian Gerighty, director of The Division 2 and The Crew, will serve as the game’s creative director, and the title will use Massive’s Snowdrop engine. Beyond that, Lucasfilm Games hasn’t revealed anything about the characters or settings within the Star Wars universe that the game will feature.

This announcement follows yesterday’s news that Lucasfilm is partnering with Bethesda to create an Indiana Jones title, the first non-Star Wars AAA game out of Lucasfilm in years. The move marks a seismic shift for Lucasfilm’s approach to gaming, widening the tent for developers that want to create games using Lucasfilm franchises, particularly in the Star Wars universe.

EA had previously suggested that the company would have exclusivity on Star Wars games for 10 years. While EA will keep making games in the future, but Lucasfilm Games is free to seek other partners. It's also possible, even likely, that the upcoming Ubisoft Star Wars game will launch after the EA exclusivity agreement ends (in about two more years.)

“EA has been and will continue to be a very strategic and important partner for us now and going forward,” Sean Shoptaw, senior vice president of Global Games and Interactive Experiences at Disney, told WIRED. “But we did feel like there's room for others.”

After this story initially published, an EA spokesperson reached out to WIRED to provide the following statement: “We are proud of our long-standing collaboration with Lucasfilm Games, which will continue for years to come. Our talented teams have created some of the most successful games in the history of the Star Wars franchise, including Star Wars Jedi: Fallen Order, Star Wars: Battlefront and Battlefront II, Star Wars: Galaxy of Heroes, and Star Wars: Squadrons. We love Star Wars, and we look forward to creating more exciting experiences for players to enjoy.”

In 2013, Disney laid off 150 employees at LucasArts, ending in-house game development. The rationale at the time was that the move would minimize “the company’s risk while achieving a broader portfolio of quality Star Wars games,” according to a statement the company made to The Hollywood Reporter at the time.

However, in the years since, the EA exclusivity deal has been criticized as a bottleneck to that goal. Aside from a few small mobile or VR games, the number of major Star Wars games from EA since 2013 can be counted on one hand. By allowing more developers to bring in their ideas for games, Lucasfilm hopes to diversify the titles it offers, and engage more deeply in the collaborative design and development process.

“The Star Wars galaxy is an amazing source of motivation for our teams to innovate and push the boundaries of our medium. Building new worlds, characters and stories that will become lasting parts of the Star Wars lore is an incredible opportunity for us, and we are excited to have our Ubisoft Massive studio working closely with Lucasfilm Games to create an original Star Wars adventure that is different from anything that has been done before.”

“I think if you look at the games landscape, it's such a diverse population of folks across the world that make games,” Shoptaw explains. “For us to go capture the amount of quality that exists in the world and be fast to market, it would be a big challenge for us to do that internally.”

Just like with past EA games, any new Star Wars games will be part of the same Star Wars canon and continuity shared across all the movies and TV shows produced since the Disney acquisition. James Waugh, Lucasfilm’s VP of franchise content and strategy, explains that while this means that games won’t always connect directly to content in other media, the possibility is on the table.

“I think where people get tripped up on that sometimes is like, ‘Oh, then it has to connect to everything else. And that's not necessarily what we're always saying,” Waugh told WIRED. “That will happen if it's right for that story.”

This new non-exclusive arrangement for Star Wars games—as well as the rest of Lucasfilm’s library of franchises—leaves open the door for developers to pitch their own ideas for stories to Lucasfilm Games. “We get no shortage of folks knocking on our door, wanting to play with our toys,” Douglas Reilly, VP of Lucasfilm Games, told WIRED.

Among that camp is Todd Howard. The famed director of Skyrim (among many other games) is also a huge Indiana Jones fan. “What's been most inspiring about the Indy game in particular is it’s a passion project for Todd Howard,” Waugh explained. “He came in with a point of view and a story that he really believes in.”

Of course, these franchises are still, in Reilly’s words, Lucasfilm’s toys, and they want to play with them too. “Ultimately, we have final approval over everything,” Reilly explained. While developers—including but no longer exclusively at EA—may have the freedom to pitch ideas for stories to the company, those developers will still be playing inside the Disney playhouse, and will work closely with Lucasfilm Games to bring those ideas to life.

Keeping both gamers and developers inside that playhouse seems to be the ultimate goal of the newly rebranded Lucasfilm Games. Increasingly, video games compete for leisure and entertainment time with film and TV. Disney has a long history of dominating film and TV competing for consumer eyeballs, but it lacks the same level of experience with video games. Leveraging the talent of outside studios could mean consumers spend far more hours of the day inside the company’s sprawling franchises than they would if Disney relied on film and TV alone.

“As we look to the next 50 years of Lucasfilm, we look forward to continuing the wonderful legacy in games, which has introduced so many memorable characters and stories. These new collaborations will allow the Lucasfilm Games team to pursue fresh and exciting directions in the storytelling of Star Wars and Indiana Jones in imaginative and different ways than those explored by our films.”

A single story-driven game can take up dozens of hours. An open-world game, like the kind Ubisoft is making with Lucasfilm Games, can potentially push into the hundreds of hours depending on how long a player wants to explore. “That really leans into why we are doing what we're doing, because these are massive entertainment experiences that last many hours, much longer than film,” Shoptaw explained.

“When people are paying $70, or they're paying good amounts of money to spend time with your content and play your game,” Shoptaw continued, “you've got to reward that investment.”

Whether you feel like relaxing at the end of the day by watching a TV show or picking up the controller to play a game, Lucasfilm will have something to keep you entertained. And by opening the door to third-party developers, many of whom are staffed by people who grew up with franchises like Star Wars and Indiana Jones, the company will never run out of ideas from across the industry to bring under its tent.

Max and Brian break down the recent announcement that EA won't be the only developer working on Lucasfilm Games going forward, and what it means for Ubisoft and gamers alike.

Aspyr's track record makes me feel better, and I like action RPGs, but mucking with something like KOTOR could be dangerous
Top 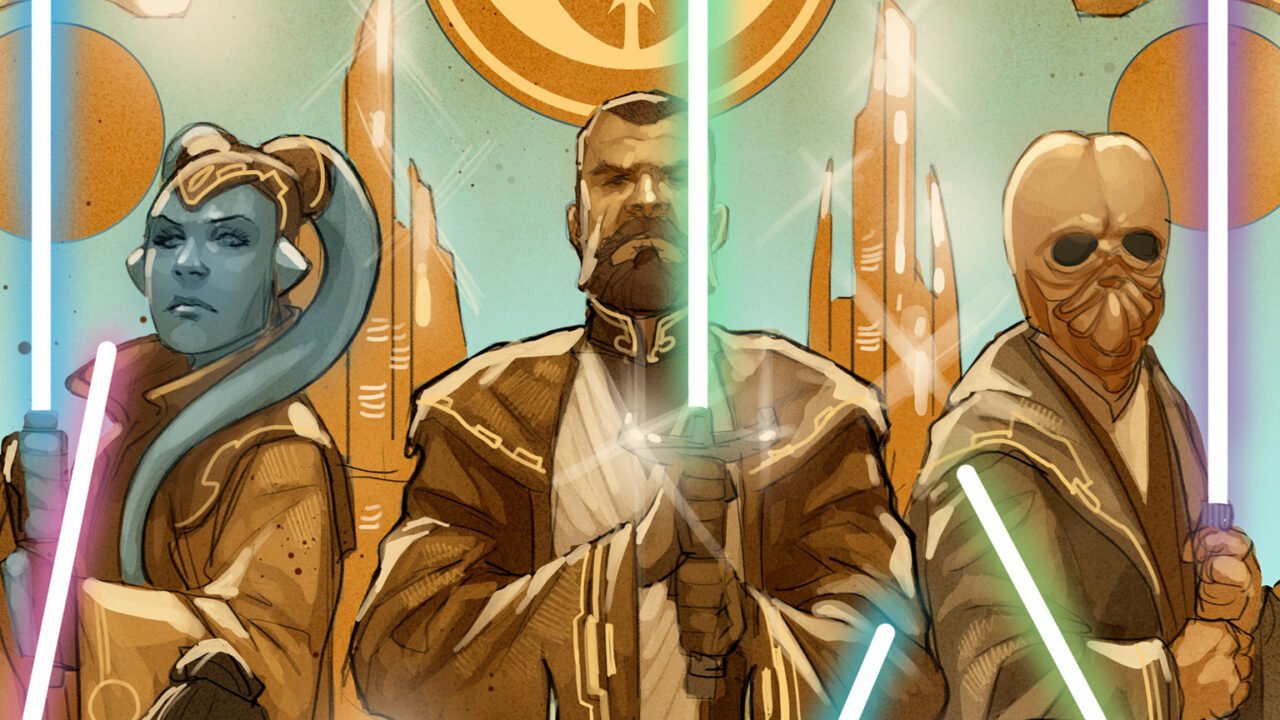 An unannounced Star Wars game said to be in development at French studio Quantic Dream could be called ‘Eclipse’ and set during the High Republic era, it’s been claimed.

That’s according to VentureBeat’s Jeff Grubb, who was speaking on his premium show for Giant Bomb (paywall) and claimed that the game is likely set to be revealed soon.

“The Quantic Dream Star Wars game is ready to be announced soon, that’s what I’m hearing here,” he said. Grubb went on to state that he expects to hear about it “probably before the end of the year.”

The journalist stated that he “isn’t certain” about the setting or era that the game takes place in, but said that he believes “it is a Star Wars High Republic game, and it’s called Star Wars Eclipse.”

The High Republic is an overarching story-telling initiative for the Star Wars franchise that encompasses books, comics and other media set around 200 years before the events of the Star Wars films.

Talk of a Quantic Dream Star Wars project began in September when French YouTuber Gautoz claimed that the Detroit: Become Human and Heavy Rain developer helmed by designer David Cage had signed a deal with Disney, after its three-game contract with Sony has ended.

“They now finished their contract with Sony and will be signing with Disney,” he said in a video. “It looks like they will be working on a Star Wars game.”

The claim was later corroborated by reliable games industry insider Tom Henderson, who posted a cryptic Star Wars and Detroit mashup on Twitter.

Kotaku later reported that the game will be more action-oriented and exploration-focused than the likes of Heavy Rain, Beyond: Two Souls and Detroit: Become Human, interactive story-based titles which all used quick time events.

As well as adopting more traditional action gameplay, the Star Wars game could include open world and multiplayer elements, it claimed.

Limited Run used to be one of my favorite companies. But the last 2 years of questionable quality control and business practices makes me very nervous of ordering off them anymore. I’ve felt scammed by them more than once now.
Top

I did get a couple of their Vita games from eBay though.
Top

Star Wars Eclipse™ is the newest adventure in the High Republic era, now early in development by Quantic Dream. Learn more on www.StarWarsEclipse.com.

Set during the High Republic era, Star Wars Eclipse™ is an intricately branching action-adventure game that can be experienced in many ways, and puts the destinies of multiple playable characters in your hands, created in collaboration between Quantic Dream and Lucasfilm Games.
Top
Post Reply
31 posts