A thread for wresting TV ratings and buyrates. New and old.

The good news for Smackdown is that the show consistently increased the audience, starting at 854,000 viewers and peaking for the main event of Roman Reigns & Ali & Shorty G vs. Cesaro & Shinsuke Nakamura & King Corbin at 1,019,000 viewers.

The first-to-third hour drop was 17.1 percent, not record breaking but much larger than has been the case in most weeks. They has also loaded the show, with the most pushed match, Seth Rollins vs. Erick Rowan, and the angle the show was built around, the Lana/Rusev face-to-face, both taking place in the third hour.

The first-to-third hour drops were 26.3 percent with women 18-49, 12.9 percent for men 18-49, 11.5 percent with teenage girls, 15.1 percent for teenage boys and 11.2 percent over 50. The most notable thing seems to be the Lana-Rusev angle idea was a major turnoff with adult women and didn’t seem to spark interest anywhere else either.

For NXT, the Finn Balor promo grew 30,000 viewers. I had expected Balor promo vs. Hikaru Shida to be close, but AEW had a 795,000 to 607,000 edge. Bronson Reed vs. Shane Thorne lost 62,000 viewers. The women’s tag title match gained 143,000 viewers, so they ended up meaning far more than Balor. The War Games angle after the match lost 39,000 viewers. Grimes vs. Bate lost 163,000 viewers. Bobby Fish & Kyle O’Reilly vs. Matt Riddle & Keith Lee lost 27,000 viewers in the head-to-head, but when AEW ended, they gained 145,000 viewers in the overrun so that’s probably a lot of AEW viewers. It probably also kills them in the last quarter because fans watch the NXT main events in fewer numbers knowing they can watch the AEW closing angle and miss nothing on NXT and still see its closing angle.

NXT did very close to AEW from 9 p.m. to 9:30 p.m. with Asuka & Kairi Sane vs. Dakota Kai & Tegan Nox, going against the Jericho contract signing and Young Bucks & Omega match. The AEW edge was 730,000 to 679,000 during that half hour, the closest it has come. But NXT collapsed in the last half hour of the show with the Tyler Bate vs. Cameron Grimes match and tag title match, with the head-to-head tag title matches doing 781,000 to 467,000. 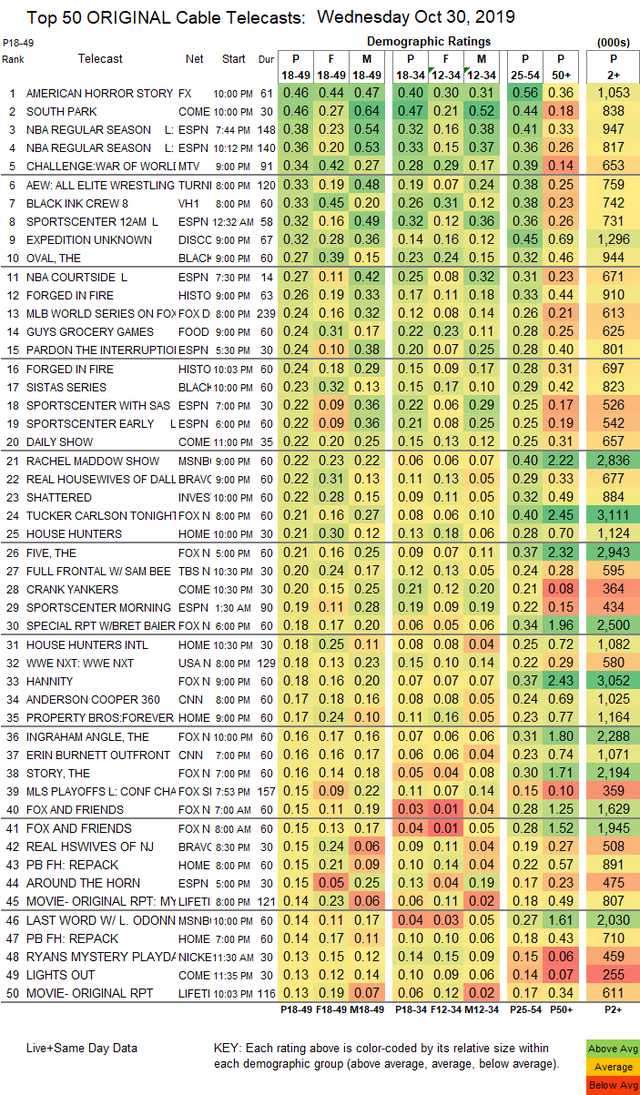 The war heats up.
Top

NXT's invasions of Raw and SmackDown led to the show getting a boost in the ratings last night.

This week's NXT averaged 813,000 viewers, the best audience for the show since October 2. This was the smallest gap there's been between NXT and AEW Dynamite, though AEW still finished slightly ahead with 822,000 viewers last night.

Dynamite and NXT were both up from last week. Against game seven of the World Series, Dynamite averaged 759,000 viewers and NXT averaged 580,000.

AJ Styles, Luke Gallows & Karl Anderson appeared on last night's NXT, but them being on the show wasn't announced in advance. They attacked The Undisputed Era in an angle right before the episode went on the air and faced Tommaso Ciampa, Keith Lee & Matt Riddle in the main event.

NXT and AEW battle to first tie in ratings and viewership battle in week six, viewership migrates from AEW to NXT in big numbers

In last night’s battle between AEW and NXT, the gap between the two shows basically disappeared after weeks of signs NXT was gaining on AEW. Among live and same-night-DVR viewers, AEW drew 822,000 viewers and NXT drew 813,000 viewers. That gap of just 9,000 viewers is down from 179,000 last week.

In terms of actual cable rating, which is measured slightly differently (rather than total number of people watching in total for a small or long stretch of time, it measures minute by minute percentages of total possible viewers with cable, so it rewards shows whose viewers watch for a longer period of time), NXT beat AEW by a 0.62 to 0.58 margin.

This story has been developing for weeks, but solidified as a major concern for AEW this week. Last week, AEW went up against game seven of the World Series, but the bounce-back from where they were two weeks ago wasn’t great – they dropped 204,000 from Oct. 23 to Oct. 30, then regained only 63,000 of those viewers this week. When Smackdown was bounced from Fox from the World Series, they lost two-thirds of their viewers, but the next week back on the usual channel actually regained more viewers than they lost.

AEW drew 1.832 million viewers on week one – 1.409 million on the live airing and 423,000 on the replay. They’re down, 587,000 viewers (41 percent) for their live show in just six weeks, which is not likely breeding confidence within AEW or TNT that they’ve done things as well as they could have to hook viewers. It could be seen as a sign to reevaluate some of their assumptions, although the real time to “get this right” was the first three weeks when they had more than one million viewers and a chance to introduce their new wrestlers to a national audience.

Meanwhile, NXT more than regained the lost viewers from last week. Two weeks ago, the show drew 698,000 viewers, then dropped to 580,000, then rebounded to 813,00 viewers this week. Total viewership for the live premiere of both AEW and NXT two weeks ago was 1.661 million viewers. This week, it was nearly identical 1.635 million. What that says is almost everyone who watched the World Series last week instead of pro wrestling returned to pro wrestling this week, but a lot of people switched from AEW to NXT.

NXT had the advantage of angles on both Smackdown and Raw that involved NXT wrestlers, which introduced NXT wrestler to a larger audience, and also conveyed to Smackdown and Raw viewers that some Smackdown and Raw wrestlers were likely to show up on NXT this week. Combining that with the intriguing Finn Balor jump to NXT and heel turn, NXT had a lot going for it. Whether AEW can get those viewers back will be something to watch for the next couple of weeks.

Raw Rating: Another rating among lowest of all-time for show, third hour with Cole vs. Seth in NXT Title match among least watched hours in Raw modern history

Last night’s WWE Monday Night Raw in USA Network drew a 1.54 rating among live and same-night-DVR viewers, essentially even with last week’s 1.53 rating, which was among the lowest non-holiday Raw ratings ever. The first hour viewership was pretty even with last week – 2.351 million tis week, 2.326 million last week. However, the first-to-third hour drop-off was 502,000, as the third hour dropped to 1.849 million viewers. It’s among the four lowest viewed hours of Raw. The main event was the relatively unknown (i.e. relative to top stars on Raw and Smackdown every week) Adam Cole, NXT Champion, facing the ice-cold Raw lead babyface Seth Rollins for the NXT Title.

WWE Raw ratings down against biggest MNF game of the year

Going against what ended up as the biggest Monday Night Football game of the year, Raw set a record low for a non-major holiday show, doing 2.06 million viewers last night.

The show was on Veteran's Day, but that is not considered the type of a holiday that impacts ratings.

The episode was expected to do a weak number, with the combination of the San Francisco 49ers-Seattle Seahawks game, and that Raw was taped.

The only Raw episodes in modern history to fall under this number were this past Christmas Eve and New Year's Eve. However, the third hour last night was lower than the third hour either of those nighs

It's hard to say taped was that big of a factor given the drop was only 76,000 viewers from last week while football was up two million viewers, to a Monday night season high at 15.98 million viewers. The first two hours were really not that terrible all things considered. The first hour itself was almost identical to last week but the audience drop was faster.

The third hour was the least watched third hour in history, even behind Christmas Eve and New Year's Eve. That was likely due to the closeness and interest in the game, plus the six-man tag with Ricochet, Humberto Carrillo & Randy Orton vs. The OC wasn't going to keep viewers who had any interest in football. The main event segment itself did gain viewers from The Viking Raiders match with Flash Morgan Webster & Mark Andrews.

Raw was tenth overall for the night on cable, beating everything that wasn't ether NFL related on ESPN, or news shows.

The 26 percent drop in audience from hour one to hour three was the largest in history, but given the excitement of the game, which went into overtime, that isn't a shock either.

Raw was down 16 percent from last year's show on the same week.

Almost back to a million, so that's good.

And hopefully word will get around that this week was excellent with good angles, which may have been their weak point with some people who thought it was just all wrestling matches.
Top

-- Last night's WWE Raw was up slightly from the non-holiday record low of 2.06 million a week earlier, but still came in as the second lowest viewership being watched by 2.127 million people. The record lows for Raw are two shows below 2 million for the shows last year around Christmas and New Year's.

On the night, Raw finished just outside the top ten in total viewership (#11) but was #4, #5 and #6 in the 18-49 demographic with an average rating of 0.7. Leading the way in both categories as expected was Monday Night Football with the Chiefs/Chargers game generating an audience of 12.567 million and a 4.0 rating.

Hours for Raw are below, showing that unlike most weeks, Raw started off extremely low and topped out in hour two before going south for hour three. The normal trend for Raw sees the first hour as the most watched with a steady decline throughout the night.

WWE Backstage drew 180,000 viewers for FS1 on Tuesday, according to Showbuzzdaily.com. The number was up from the 100,000 viewers last week.
Top

With a loaded up go-home show featuring several appearances by wrestlers from Raw and SmackDown, NXT managed to squeak out a win for the first time in the Wednesday Night Wars.

AEW Dynamite trailed with 893,000 viewers but had a 0.39 rating in the 18-49 demo. That was good for eighth on the night in cable. NXT finished 13th. AEW was down nine percent in the demo and seven percent overall in terms of viewers from last week's post-Full Gear episode.

As per usual, Dynamite beat NXT in every demo except for persons over 50, where NXT had a bigger than usual advantage of 0.40 to 0.29. It's logical to assume it did better in that demo due to the influx of Raw and SmackDown performers who would be more familiar to that older audience.

It was advertised in advance that wrestlers from Raw and SmackDown would be on NXT. At the end of Monday's Raw, Triple H cut a promo hyping that there would be an "open door policy" last night.

AEW was strongest with males 18-49. They had a 0.52 to 0.39 advantage over NXT, though that was closer than the two shows usually are in that demo.

AEW did better than I expected.
Top

Decent ratings for both. NXT got their hotshotting bump and AEW held steady.

It really shows there are WWE fans and AEW fans. Unfortunately not as many as when WWF and WCW had their own fanbases in the 90s.
Top
Post Reply
297 posts