I do. It was a big day as it was the release of Windows XP! I skipped school that day and had my mom take me to Staples. I hoped they still had some copies left as since it was the day of release I thought they may have been sold out! When I walked in there was hardly anybody in the store. I asked an employee if they had Windows XP in stock. He said they did and even had a deal going where if you bought Windows XP you got a free headset! Alright! After that we went to HH Gregg and purchased a DVD drive for the computer. I'm not even sure why I wanted one at the time. Just wanted to be up to date for when games started releasing on DVD I suppose!

After that we went home and I immediately popped the XP installation disc into my PC and was ready to go! It was awesome, instantly I could tell that this was much better than Windows 98. With Windows 98 I would end up doing a re-install several times a year. I had a high-end computer at the time. 1GHZ AMD Athlon,384MB Ram,32MB Geforce 2 GTS so it isn't like my hardware was the problem. I'd install Windows 98 and it would be ok at first but it would constantly blue screen and hard lock for what seemed like no reason. I could be playing a game of SimCity 3000 Unlimited or Hard Truck 2 and randomly during gameplay CRASH! With XP that was a thing of the past. It basically never would blue screen or crash on me. I installed XP once on my PC on October 25th,2001 and I don't think I ever had to re-install it. It wasn't until I got a new PC that I did a fresh install. Unlike 98 it never became unstable and needed a re-install.

Then in 2007 Windows Vista was released. I had no interest in it. Windows XP was still running flawlessly. I saw no benefits to upgrade to Vista. I was plenty happy with my Windows XP. Two years after that Windows 7 was released but was I interested in upgrading? Nope! I had been using Windows XP for 8 years at the point. It worked great and did everything I needed it to. There seemed to be no benefit in upgrading to Windows 7.

Then came 2010. I was still very happy with Windows XP which I had been using for 9 years at that point. Then a little game called Just Cause 2 was released. It looked amazing! I just had to play it! So I pop it in to install and.....it required DirectX 10 to run. Windows XP only supported up to DirectX 9. I did not want to upgrade at all but I really wanted to play Just Cause 2 and I also knew that more and more games would start requiring DirectX 10. So after 9 years of using Windows XP and it being a great operating system I was forced to upgrade. I of course didn't really like Windows 7 at first because it wasn't exactly the same as XP. But it did play Just Cause 2 and it was quite an amazing game at the time.

As time went on I began to like Windows 7 just as much as I did XP. It had all the stability of XP plus many more features. Two years later in 2012 Windows 8 came out and it was a joke. I didn't even consider upgrading to Windows 8. Why would I want a tablet OS on a PC? I even had to "downgrade" a family members computer that came with Windows 8 to Windows 7 because they didn't care for it at all.

We all know what came after Windows 8/8.1. You guessed it, Windows 10. Again I had no desire to upgrade. Microsoft was constantly trying to force people to upgrade to 10 by offering free upgrades and having those screens pop up about updating which tricked some people into upgrading to 10 when they didn't want to. I ended up installing a program called Never10 that would block all of that bullshit. I was happy with Windows 7 and Windows 10 didn't offer any new features I wanted. From what I read it was intrusive and stole your information. I could care less about that Cortana shit. I was happy with Windows 7.

Then 2019 rolls around. I had now been using Windows 7 for as long as I used Windows XP. The Windows 7 end of life date was coming up fast which was January 14th 2020. I knew I should upgrade but also knew I could keep running Windows 7 without updates. There was just nothing Windows 10 had that I wanted or needed. Then a very similar situation happened. In 2019 I saw a game called Forza Horizon 4. I had somehow not really paid much attention to the Forza series up to then but FH4 looked amazing. I had to play it, it looked like exactly like my type of racing game! But guess what? It required Windows 10 to run. Not only that but new games were coming out that used DirectX 12 and Windows 7 only supported up to DirectX 11. With the end of life date coming up fast and new games needing Windows 10 and DirectX 12 I had no choice but to update.

Just like when I went from XP to 7 I didn't like 10 at first because it looked different. I found a couple of programs to get some of the looks and functions back from Windows 7. Programs that I still use to this day! Windows 10 isn't all that much different from 7 once you disable all the extra crap you don't need. So that brings us up to the current time. I used Windows XP for 9 years from 2001-2010. I used Windows 7 for 9 years from 2010-2019. Will the same thing happen with Windows 10? Will I be forced to upgrade in 2028 because a new game needs the latest version of Windows to run it? Seeing how Microsoft is choosing to just update Windows 10 rather than release a whole new version of Windows maybe not. Even with the update system we all know there will eventually be an entire new version. Windows 10 originally was released in 2015 which makes it 5 years old right now. How long will it last until they decide to release an entire new Windows version? Hopefully not until 2030 or so. That way I can keep my current OS longer than the 9 years I have been in the past.

I started this post just to tell how I bought Windows XP on release day and ended up making a "Calavera's History of Windows: 98 to Present" If anybody actually read the entire thing and made it this far then I hope you enjoyed it.

I have no idea where I was or when XP actually released because I had been using the XP beta for months prior to its release.
Top

melancholy wrote: ↑
Thu May 14, 2020 10:24 pm
I have no idea where I was or when XP actually released because I had been using the XP beta for months prior to its release.

That reminds me, I did use Windows Server 2003 as my main OS for awhile during the XP days. I think somebody posted on DCEmu on how you could download it for free as a 30-day trial. There were of course programs to get rid of the 30 day limit. I installed it out of curiosity just to check it out and ending up using it for quite awhile. So I guess I technically didn't use only XP from 2001-2010 but Server 2003 was basically the same as XP.

I was living with my mom and we had no money to buy XP, the internet was still dialup and too slow to pirate XP and my computer at the time wouldn't have run it anyway, so I didn't get it until a few months later


Calavera wrote: ↑
Thu May 14, 2020 10:42 pm
That reminds me, I did use Windows Server 2003 as my main OS for awhile during the XP days. I think somebody posted on DCEmu on how you could download it for free as a 30-day trial. There were of course programs to get rid of the 30 day limit. I installed it out of curiosity just to check it out and ending up using it for quite awhile. So I guess I technically didn't use only XP from 2001-2010 but Server 2003 was basically the same as XP.

Heh I did that too for a while on my laptop. There were a few programs that wouldn't run but running a server OS on my laptop impressed my college friends enough that it was worth it.

I've never owned a computer that ran XP. I had a stale-ass Thinkpad running Win 95 in the early aughts so I could run Lunar Magic and work on my "stellar" Mario World ROM hacks.

In October 2001, my family still had a graphite iMac G3 400 DV SE running OS 9.1 that we all shared. I actually had a screenshot from back then, by way of my embarrassing DeviantArt account: 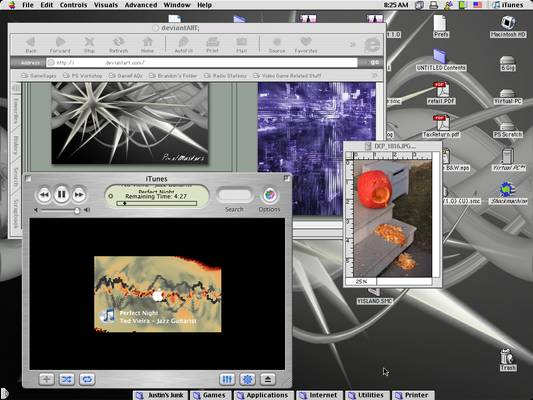 We didn't get OS X until sometime in late 2001 or early 2002. I bought and upgraded an Apple Cube for college in 2005, collected G4 towers throughout school, and finally built a hackintosh PC in 2010 but switched to Windows 7. Not sure which OS had more jank.
Top

I forgot to mention the reason why I replied to this in the first place.

My dad and I almost went to a midnight launch party for one of the marquee OS X releases. It was probably when 10.4 (Tiger) came out, and the local Apple-authorized retailer was having a shindig in their tiny 1,000-square-foot office/showroom out by the airport and industrial district.

I think OS X 10.4 might be my favorite OS of all time, mostly for nostalgia purposes. It feels like the Mac version of XP in terms of stability and features, it was an operating system that existed between the older and newer OS generations. OS X 10.4 was the pinnacle PowerPC-based software, and was the first OS that Apple made for Intel-based systems.
Top

But I do know where I was. On the day in question, I was 2 places. At home, then at school, then at home again...

I wanna guess playing Crazy Taxi at home.
Hank Azaria not playing Apu on the Simpsons will make the role as irrelevant as the Simpsons has been as a series since 1999!
Top
Post Reply
8 posts • Page 1 of 1