About over a week ago, distributors Anime Limited & GKIDS both finally revealed the home video details for their Ultimate Edition Blu-ray of Neon Genesis Evangelion. Priced at £299.99 SRP, the UK release sold all 1500 units within 12 hours and eventually was allocated an additional 1000 units which is almost sold out. The US sold all 5000 units within 12 hours as well while Australia has 500 units under Madman’s distribution. LEONINE is also offering a very similar package for Germany (with German-authored discs).

As pre-orders began, a second countdown appeared which hinted at additional editions available for those who could not afford the £200 (£180 for Unlimited members) early bird price tag. Today, those editions are now revealed. 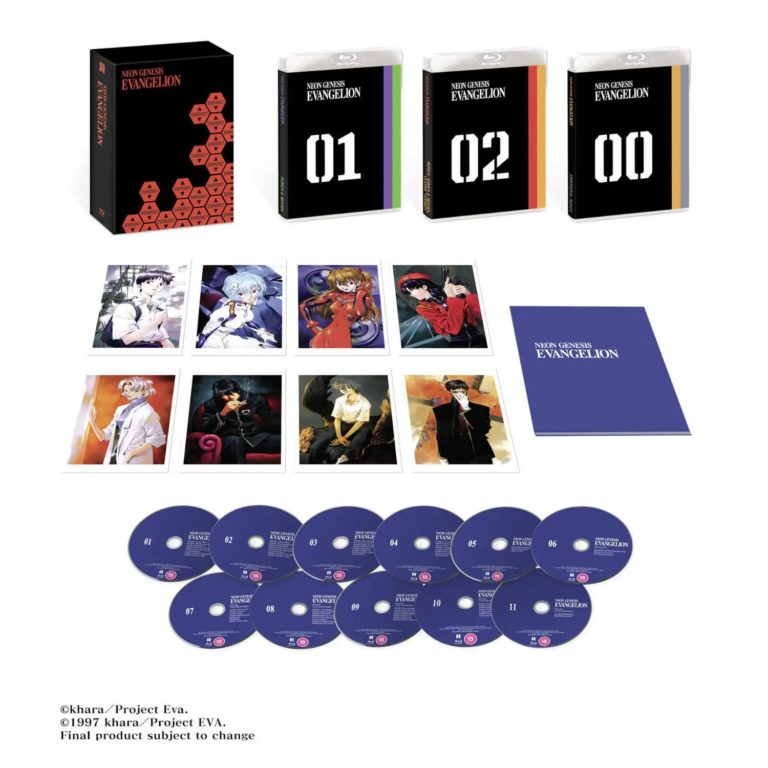 Starting off the second countdown details is a collector’s edition Blu-ray that pretty much follows the same approach that Anime Limited had done for their other titles; Fullmetal Alchemist (2003), Gurren Lagann and Mobile Suit Gundam SEED.

The package comes with the following:

However, this release is exclusive to Zavvi and is available to pre-order for £124.99 plus postage (free postage if you have Zavvi’s Red Carpet). It is also scheduled for release on 6th December 2021, the same day as the Ultimate Edition Blu-ray. For the US owners, the Region A version is exclusive to Rightstuf for SRP $219.99. 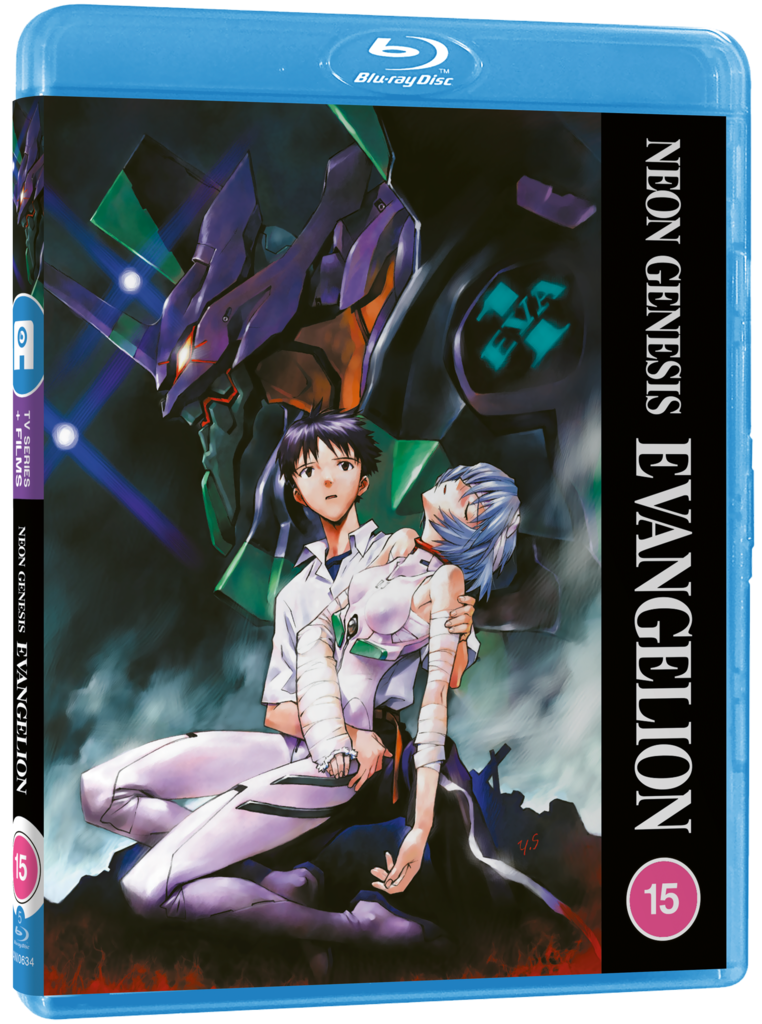 Next we have the standard edition Blu-ray for those who aren’t interested in collector’s packaging. The set is also be available for pre-order, priced at £69.99 SRP and will include both the TV series and the two films together in a single Amaray case. Release date is the same as the previous editions. For US owners, the Region A version is available on Rightstuf for $59.98 SRP. 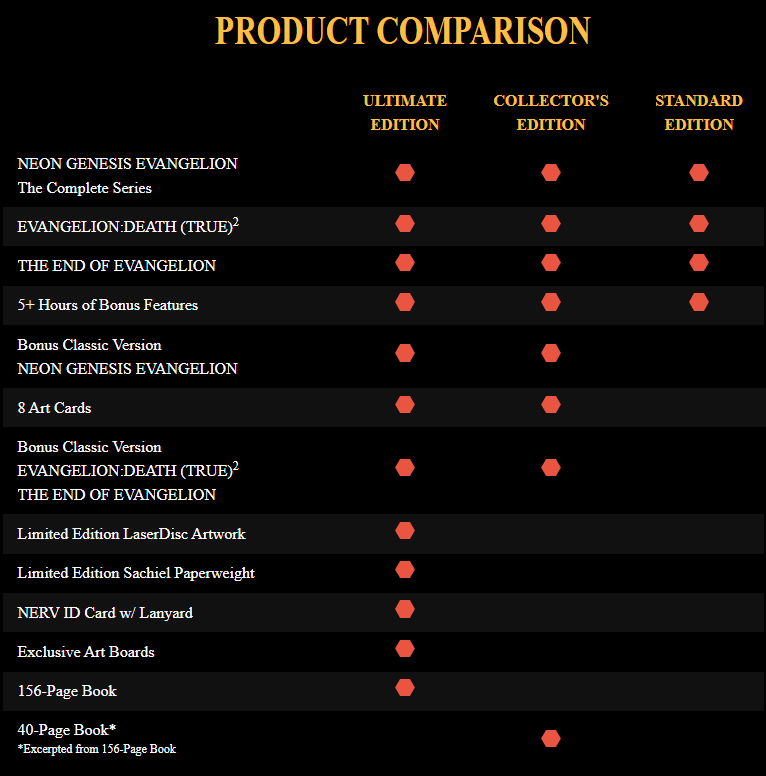 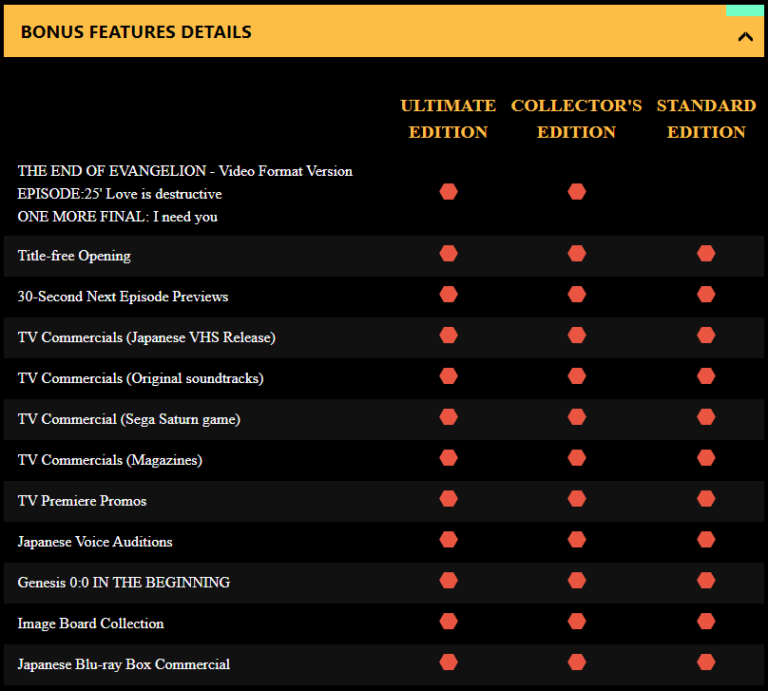 As shown in the comparison list above, both the Classic English dub discs (5 in total) as well as The End of Evangelion video format version (which was on its own disc) are not included in the standard edition release. The rest of the on-disc content, such as the many hours of bonus features, are included in the standard edition as well.
source alt source with more international info (I assume, it has Australian details for the top end version so probably for the others as well)
Top

So I need the middle set at least for the real version? (Why did I sell my Platinum DVD's all those years ago)

I just had a look at the ultimate Aussie version. $520, it's quite pricey and I was thinking about it. BUT... "The international re-release of NEON GENESIS EVANGELION does not contain “FLY ME TO THE MOON” in any of its home video editions"

So they've butchered it and the set is now worth about $5 at a pawn shop in 5 years.
If I should Die Hard Arcade before I Alan Wake.
PREY the Lords of Lore my Soul Calibur to Take-Two Interactive.
Top

something sounds off, its been a while but sounds like the trailer may have the new dub on maybe
Top

well now I gotta choice, the series ending films are being shown next week in cinemas over here & my local has the dubs (good for me as even though I remember a lot of what goes on in them I couldnt do subs to fill bits in anymore) now I just gotta work out whether to go or not. On one hand it may not be that crowded, specially as Stoke has them on as well, on the other there may be a lot & I aint sure if I'm ready for a possible crowd (if one happens) but it is the only time outside of any sort of convention (or me winning the lottery to rent a cinema) that I'll see them on a big screen, of course I may procrastinate too long & miss it wchich is the other possibility. Wonder if other countries ate doing this pre BD release as well
Top

details of the UK showings
Top

back from watching it at the cinema, few mild changes to what I remember (though with the death part that may be as the (true) bit aint been seen much) little disapointing the End was missing the sadistic "hit em again" line from the flamethrower team as that was a nice touch on the dub. Not many in the cinema so was perfect for me & my social issues
Top

This explains why things seemed messed up

still kinda nice on a big screen, just wish the right version had been shown
Top

if like me you ordered it over here then there are some delays, possobly in other parts of the world as well since shipping issues will affect many