Call of Duty Modern Warfare Remastered is all but confirmed now, thanks to tweets from Infinity War and COD itself. Oh, and then there’s this advert for Infinite Warfare (via AGD), which is the next - and still techically unannounced - game in the series:

As you can see, bottom left, the Legacy Edition of Infinite Warfare comes with Modern Warfare Remastered and this new shot outlines the contents - the campaign, and ’10 MP maps’.

That’s slightly less than the original 20 or so when the game first released but still hugely exciting considering how pivotal the game is. It’s the foundation for COD multiplayer as we know it today so it’s going to be really interesting to go back.

Modern Warfare Remastered will only be sold with Infinite Warfare, Activision says

If you're more excited to head back to the Chernobyl Exclusion Zone than into space, maybe get more excited about space real quick. Activision confirmed in an official FAQ that Call of Duty: Modern Warfare Remastered will be sold strictly as part of Call of Duty: Infinite Warfare's special editions.

Modern Warfare Remastered is a visually modernized version of the influential 2007 shooter, with improved models, lighting, and even animation. Fans have been clamoring for a remake of Modern Warfare (and Modern Warfare 2) for years, so I can understand why they might be disappointed that they'll only be able to get it as a bonus with another game.

Furthermore, it isn't included in the standard $59.99/£54.99 Infinite Warfare package. You'll have to drop a minimum of $79.99/£79.99 on the Legacy edition to snag Modern Warfare Remastered. However you get it, the remastered shooter will be included as a separate download, not as part of the main physical or downloadable package.

Activision may elect to sell Modern Warfare Remastered on its own sometime after Infinite Warfare comes out, but that isn't in the cards for the moment. And as for a Modern Warfare 2 remake, it's pretty easy to imagine it being exclusively bundled with a future Call of Duty game as well - assuming Activision finds success with this offer.

What a rip off.

They'll probably release the remaster seperately after hittting a number of sales and you can bet there will be DLC relelaesed later on.
I can't get no...
Top

Call of Duty: Infinite Warfare was announced this week only for PlayStation 4, Xbox One, and PC, but some might have wondered if the game, or a version of it, would also be on the way for last-generation consoles.

Now, it looks like that will not be the case. Someone asked developer Infinity Ward on Twitter if Infinite Warfare was coming to PlayStation 3, to which the studio responded, "No, it will not." If it's not coming to PS3, then presumably it will not be made for Xbox 360, either.

GameSpot has followed up with Activision in an attempt to confirm this and find out why the company is leaving last-generation consoles behind.

2015's Call of Duty: Black Ops III was released for current- and previous-generation systems. However, the PS3/Xbox 360 version of that game did not include a campaign, but instead only multiplayer and Zombies.

With the PS4 and Xbox One console generation taking hold, currently accounting for at least 55 million consoles sold between the them according to estimates, it's not much of a surprise that the Call of Duty series is leaving older consoles behind. It was only a matter of time, and now, it appears Infinite Warfare is ushering in a new era of current-generation only Call of Duty releases.

Some have criticized cross-generational development, claiming that needing to deliver the same game on different hardware can lead to "compromises." As such, Call of Duty moving to new-generation systems only may end up being a boon for the series, though that remains to be seen.

Infinite Warfare launches on November 4. GameSpot recently spoke with design director Jacob Minkoff, who told us why the game is going to space and what that allows.

Also on the way is a Call of Duty 4: Modern Warfare remaster. Activision recently showcased the game's many graphical improvements as part of a comparison video.

So as the only person looking forward to this on the board: Yippee.

This will probably b a day one purchase.
Top

If they gave it away for free to people who bought COD4 all those years ago, I'd give it another run through. Since its included with the steaming pile of rehash shit MW 20 Black Ops 7.3, won't be bothered.
Top

Code-Red wrote:If they gave it away for free to people who bought COD4 all those years ago, I'd give it another run through. Since its included with the steaming pile of rehash shit MW 20 Black Ops 7.3, won't be bothered.

I get that, but that is kinda why I love the COD series. It is the plain potato chips of FPS gaming. You know exactly what you are getting. Same as Dragon Quest is to the RPG genera.
Top

So they've got for an unashamed Titanfall + Halo rip off with some Zombies thrown in?

Funny that most of the peeps behind Titanfall are ex CoD devs.
I can't get no...
Top


No way.. Plain chips are good!
COD is more like salt and vinegar.. OK at the start of the party they seem popular, But when the party is over, EVERY flavour of chip has been eaten and there's still half a bag of salt and vinegar..
And that same half bag of salt and vinegar chips will be served up at the next party a month later... Stale and the result will be the same.
If I should Die Hard Arcade before I Alan Wake.
PREY the Lords of Lore my Soul Calibur to Take-Two Interactive.
Top


Funny you pick Salt and Vinegar, it is one of my favorite flavors.
Top

Nowt wrong with Salt and Vinegar.. one of my fave two flavours at the mo, CoD is nowhere near as exciting.
I can't get no...
Top

Kevin Smith is in the next Call of Duty DLC

Movie director Kevin Smith is in the next Call of Duty DLC.

Activision put out a trailer for the 90s-themed Rave in the Redwoods, the next chapter in the Zombies portion of Call of Duty: Infinite Warfare, and at the end the brains behind the likes of Chasing Amy, Mallrats and Clerks turns up with a machine gun and a line of dialogue.

Here's the official blurb for the DLC:

After escaping the terrifying Zombies in Spaceland, our heroes are transported to an abandoned campground... the perfect site for Willard Wyler's next horror masterpiece. Set in the '90s, the four actors find themselves in brand new roles, along with some fresh new threads.
Together, they'll team up to take on endless hordes of raver zombies and the mysterious Slasher, who's on the prowl to add more "trophies" to his collection. With the help of some brutal new weapons and even director Kevin Smith (!), our heroes just might be able to put an end to the madness in the Redwoods.

There you go. Kevin Smith is in COD. What a time to be alive.

Rave in the Redwoods arrives first on PlayStation 4 on 31st January 2017 as part of the Sabotage DLC pack. 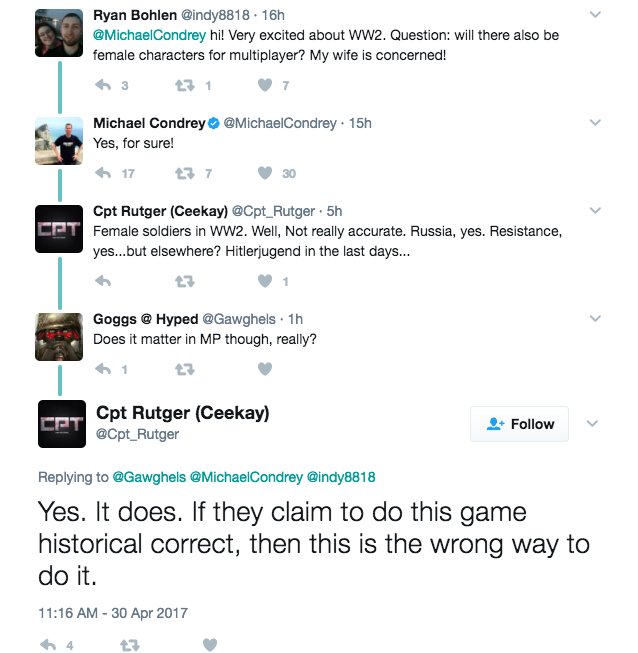 Are there female Zombies?

The fucked up thing about this is that we'll have the old "You can shoot and kill female characters online" thing again. Its a vicious circle.
I can't get no...
Top

If there were female zombies in WWII then there should be.
Top

Only If they claim this game to be historical correct.
I can't get no...
Top
Post Reply
82 posts